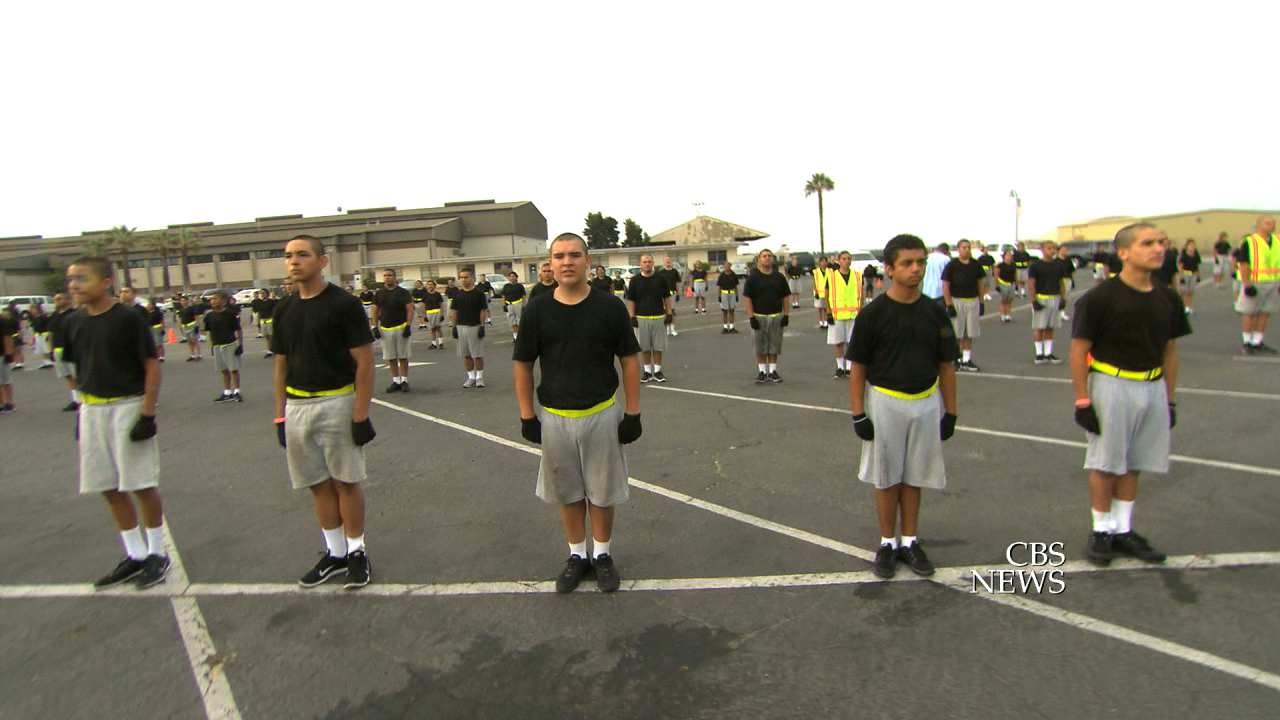 This is the first in a series of reports on the Youth ChalleNGe Academy program and the cadets trying to turn their lives around. CBS News will follow their progress, giving frequent updates through December.

LOS ALAMITOS, Calif. - The 4 a.m. wake-up call was none like these teenagers had ever heard.

"Get up! Move it!" the instructors shouted as they rushed in. "You better hurry up! Toe the line!"

It was July, day one of Sunburst Youth Academy, an academic boot camp that could very well change the lives of the young cadets, all high school dropouts. Sunburst is one of 35 such "Youth ChalleNGe Academies" in 29 states run by the National Guard. The military-style programs are aimed at getting high school dropouts back on track. Of the more than 120,000 dropouts who have gone through the program, nearly 90 percent have gone on to college or a job.

The cacophonous pre-dawn alarm clock kicked off "Shark Attack," a rigorous beginning to a rigorous program, designed to set the tone, establish structure and let the rebellious teenagers know who's in charge.

"Your day starts today -- it's going to be a looong day!" bellowed Staff Sgt. Timothy Edwards, an instructor at the program.

Angel Kay LeMaster, Jeremy Ceasar, Crista Hopkins, Adjekai Stewart, and the 212 other students in the class have trouble in their pasts -- drug abuse, violence, family issues or simply bad luck. They came to Sunburst, 30 miles south of Los Angeles, desperate for help. If you hear their stories, you understand why.

"Me and my mom was homeless pretty much, sleeping in cars, freeways, hotels," 17-year-old LeMaster told CBS News. I was always homeless, on my own, my entire teenage life, that caused me to drop out."

"When I turned 13, I became a careless teenager. When I turned 14, I became a delinquent," said Ceasar, 17. "I got into seven fights my freshman year, three fights my sophomore year. And I was on the thin line of getting arrested and expelled at the same time."

"When someone tells you something so many times, you start to believe it," said 17-year-old Hopkins. "They always tell you that sticks and stones will break your bones, but words will never hurt you. It's so not true. Words hurt more than anything, especially if it's by someone you love."

"I want to make my dad proud," said Stewart, 17. "He hasn't been in my life, so it sounds backward. But I want to make him proud of the young lady he never took the time to ... to learn."

Their last chance at a second chance began in July. Dropped off by parents or guardians, sometimes a friend or a neighbor, each of them volunteered to be here.

"It just breaks my heart. But it's for the best," she said, wiping away her tears. "I'm sure he'll come out a different person. ... He's a good kid, he just needs help."

"It was really tough. It was hard to say goodbye," Francisco said. "I didn't think of it as a sad goodbye. They were tears of joy."

The cadets are split into platoons -- two male, two female. Since July, they have been told when to eat, sleep and go to school, a five-and-a-half month residential phase that ends in December. No access to social media, television or contact with the outside world.

It's all summed up in a call-and-response, instructor Edwards likes to run with the cadets. "All you have to do is what?" he'll yell. "Breathe, Sergeant, breathe!" they yell back. "We are going to think for you," Edwards finishes.

LeMaster came ready for the challenge.

"I didn't come here for my mom or dad," she said. "I don't need to prove anything to anyone but myself. So if I can do this - because this is hardcore - if I can do this, then I can leave here and do what I need to get done."