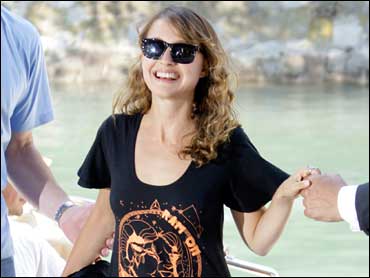 Natalie Portman arrived in Venice on Monday to present her directorial debut, the short film "Eve."

Portman's film was presented alongside projects from 23 other filmmakers from all over the world.

"Eve," starring Lauren Bacall and Ben Gazzara, is about love and romance among the older generation.

Portman arrived at its screening wearing Capri-length jeans, a t-shirt and sunglasses that she wouldn't take off for press photographers. She also didn't seem interested in posing for photos or taking about her film.

However, she did stop briefly to say she was "honored" to have her short film selected for the festival.

On Monday evening, Portman also appeared on the festival red carpet for the premiere of in-competition film "Birdwatchers," about the land rights of native Indians in Brazil's Amazon by Italian filmmaker Marco Bechis.