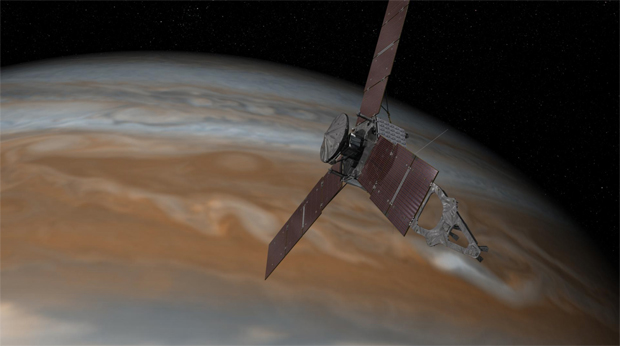 Five years outbound from Earth, NASA's $1.1 billion Juno probe is in good health closing in on Jupiter, NASA officials said Thursday, setting the stage for a make-or-break July 4 rocket firing to slow the craft enough to be captured by the giant planet's gravity and pulled into an orbit around its poles.

Launched Aug. 5, 2011, atop a United Launch Alliance Atlas 5 rocket, the solar-powered Juno picked up a gravitational boost during a close flyby of Earth in October 2013, putting the craft on a trajectory to intersect Jupiter.

On July 4, at 10:30 p.m. EDT (GMT-4), accelerating toward Jupiter at more than 40 miles per second thanks to the ferocious grip of the planet's gravity, Juno's main engine will ignite for a 35-minute burn, slowing the craft enough to bend the path into the desired 53-day polar orbit.

Because of Jupiter's distance -- about 540 million miles from Earth -- radio signals confirming the start of the rocket firing will not reach flight controllers for 48 minutes, at 11:18 p.m. The burn should end at 11:53 p.m. Earth-receive time.

Going into the long-awaited maneuver, mission managers said the spacecraft is in excellent health with all systems "go" for the long-awaited -- and critical -- Jupiter orbit insertion (JOI) maneuver.

But "it's a one shot deal," said Scott Bolton, Juno principal investigator at the Southwest Research Institute in San Antonio. "The whole thing's riding on this JOI, Jupiter orbit insertion, activity on July 4. Somebody asked when does the nail biting start? It's already started."

Next to the rocket launch that sent Juno on its way five years ago, getting into orbit around Jupiter is the riskiest part of the mission, Bolton said, because of the extreme radiation environment -- equivalent to 20 million rads, or 100 million dental X-rays in one year -- and the chance for a computer reset or some other malfunction that could cut the rocket firing short or prevent the motor from starting at all.

"But we put safeguards in the system, including what we call 'auto restart,'" he said. "If, for instance, radiation causes the computer to reset and the engine stops, it's ... designed, for this one portion of the mission, to (quickly) restart the burn. So it'll do a quick recycle and within 500 seconds restart the burn."

While engineers expect to get the full duration 35-minute firing, "if we don't get all the way in one shot we'll get there eventually," Nybakken said. "Even getting to a 30-minute burn without interruption gets us into a fabulous science orbit. ... But of course, we want the whole enchilada."

Assuming the JOI burn goes well, a 20-minute rocket firing in August will put Juno in its final science orbit.

Jupiter is the solar system's largest, and presumably oldest, planet, made up of leftovers of the solar nebula that collapsed to form the sun some 4.5 billion years ago. By studying Jupiter, scientists hope to answer fundamental questions about the evolution of the early solar system and shed light on the processes going on below the cloud tops of gas giants like Jupiter, Saturn, Uranus and Neptune.

In so doing, scientists hope to gain insights into how the smaller terrestrial planets formed and where the heavier elements needed for life originated.

"We don't currently understand how we formed Jupiter," Bolton said. "We're puzzled, we learned some things from previous missions but Jupiter looks a lot like the sun, a smaller version. It's almost all hydrogen and helium, just like the sun is."

But previous observations show Jupiter is enriched in elements heavier than helium.

"We don't know exactly how that happened," Bolton said. "But we know it's really important. The stuff that Jupiter has more of is what we're all made out of. It's what the Earth is made of, it's what life comes from. So learning about that history is really critical if we're going to figure out how we got here."

"We have special instrumentation that looks deep in at the magnetic and gravity fields to see how it's spinning inside, how it is structured," Bolton said. "Is there a core in the center of Jupiter? If there is a core of heavy elements, a bunch of rocky, icy material squeezed down in the center of Jupiter, it tells us something about the early processes of the solar system because that means rocks must have formed in the early solar system before Jupiter did.

"We don't really know if there's a core," he said. "That's one of the things Juno is going to investigate. If there is, then that tells you sort of when and how and a little bit of where Jupiter must have formed. That, tied with the water abundance, are two key discriminators in theories of how and where Jupiter formed."

Surprisingly, perhaps, Juno could accomplish virtually all of its scientific objectives without the use of a visible-light camera. But the spacecraft is equipped with a full-color camera called JunoCam, primarily to provide imagery for public outreach.

"It's carrying a camera that's going to take really awesome photos of Jupiter," writes Emily Lakdawalla of the Planetary Society. "But you're going to have to be patient. We won't be able to see spectacular views of Jupiter's belts and zones from Jupiter orbit until the very end of August, and it'll be November before we'll see automated release of high-resolution raw images."

Once in its planned science orbit, Juno will swoop to within 3,100 miles of Jupiter's cloud tops once each revolution to collect precise data about the strength of its magnetic and gravitational fields. And it will do so in an orbit around the planet's poles, ducking below the intense radiation belts that concentrate high-energy sub-atomic particles around the equator.

She said an enormous population of electrons trapped in Jupiter's magnetic field are accelerated "to the point where they're moving at almost the speed of light. They're incredibly penetrating, they're damaging to electronics and they can create enough noise in a detector to totally blind a camera."

Electrons colliding with a spacecraft "immediately begin to ricochet and release energy creating secondary photons and particles, which then ricochet," she said. "It's like a spray of radiation bullets."

To survive in that hellish environment, Juno's electronics are housed inside a nearly 400-pound titanium vault with walls a half-inch thick that will reduce the radiation dosage by a factor of 800.

Even so, the effects of the environment are expected to reduce the spacecraft's useful life to less than two years -- 20 months, or 37 orbits. At that point, Juno will be ordered to crash into Jupiter's atmosphere to prevent any chance of a future collision with one of Jupiter's moons and contamination of any presumed sub-surface oceans.

Built by Lockheed Martin Space Systems of Denver and managed by the Jet Propulsion Laboratory, Juno is the ninth spacecraft to study Jupiter and only the second, after NASA's earlier Galileo probe, to orbit the huge world.

All of the earlier spacecraft were powered by radioisotope thermoelectric generators, or RTGs, which convert the heat produced by radioactive decay into electricity. Juno is the first solar-powered spacecraft designed to study a planet at Jupiter's distance of nearly 500 million miles from the sun. At that distance, sunlight is 25 times weaker than at Earth.

As a result, Juno features three huge solar panels, each one the size of a tractor-trailer rig. At Earth's distance from the sun, the arrays would generate 14 kilowatts of power. At Jupiter's distance, they will provide just 400 watts. But that's enough to power Juno's science instruments and subsystems.

"The world has really changed" when it comes to online dating