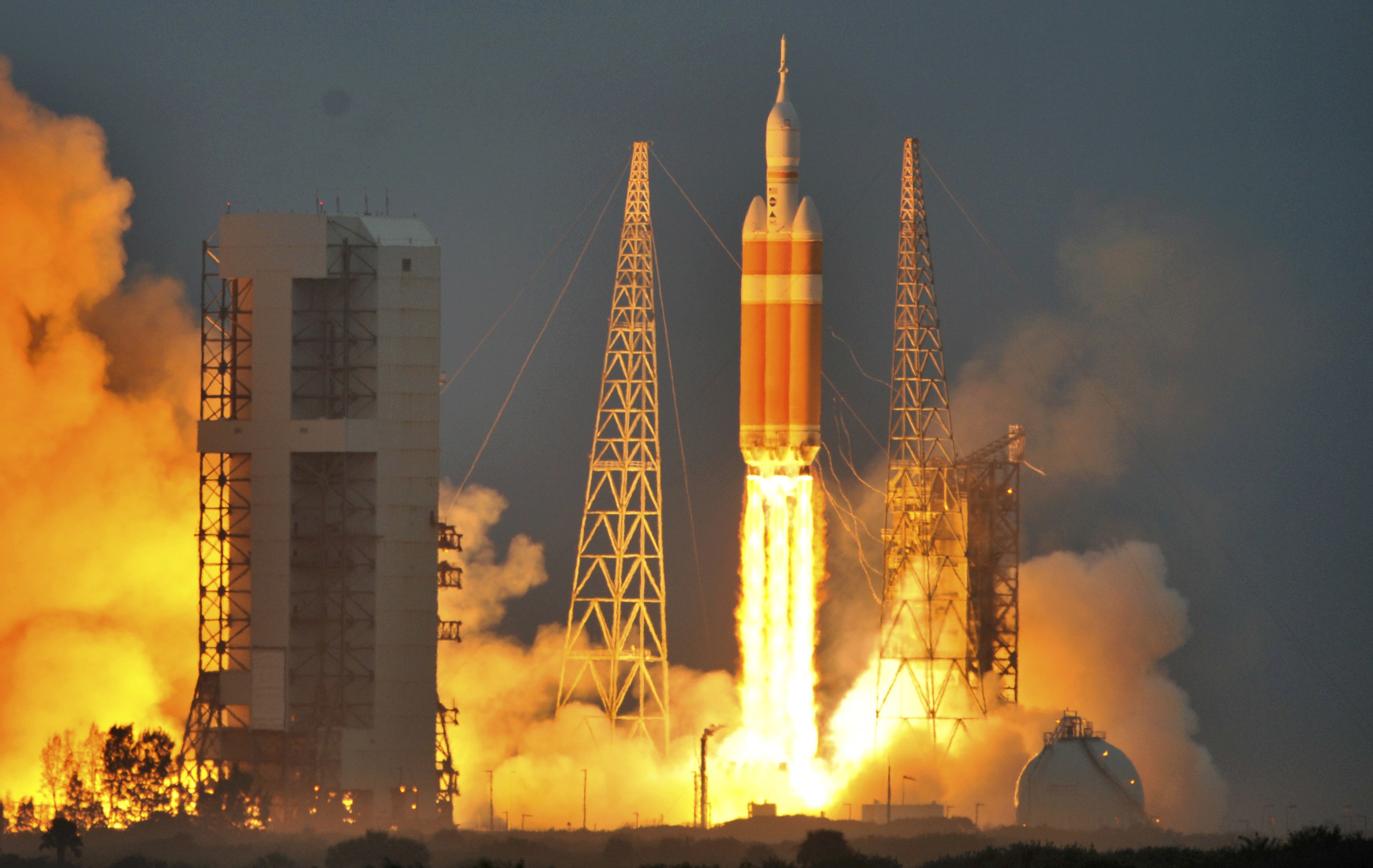 CAPE CANAVERAL, Fla. -- Running a day late, a United Launch Alliance Delta 4 rocket roared to life and vaulted into orbit Friday, boosting NASA's first Orion deep space exploration craft into space for a long-awaited unmanned test of the vehicle the agency hopes will one day carry astronauts to an asteroid and, eventually, to Mars.

Coming nearly three-and-a-half years after the final space shuttle launch, the maiden flight of Orion marked a major milestone for NASA, the first test of a new U.S. spacecraft designed to carry astronauts beyond low-Earth orbit since the final Apollo moon mission more than four decades ago.


While NASA's budget is constrained and flights to Mars are not expected before the mid-2030s (at the earliest), the launch Friday generated widespread interest and served as a major morale-booster for NASA and its contractor workforce.

"Its biggest significance is symbolic," space historian John Logsdon, founder of the Space Policy Institute at George Washington University, told CBS News. "This is the first time a piece of hardware intended to take humans beyond low-Earth orbit is being tested or used, for 42 years, since Apollo 17.

"It's a very small but real, tangible step towards eventually sending people out to the moon, beyond and eventually to Mars."

Speaking from orbit Thursday, Barry "Butch" Wilmore, commander of the International Space Station, said the Orion mission was "a thrilling prospect when you think about actually exploring the solar system.


The launch was delayed one day because of a variety of issues Thursday, including a boat in the off-shore launch danger zone, higher-than-allowable ground winds that triggered two countdown interruptions, and sluggish propellant fill-and-drain valves used by the three booster cores making up the rocket's first stage.

The valve problem was blamed on prolonged exposure to ultra-low temperatures, and engineers implemented a plan to make sure they would work smoothly the second time around. The valves apparently worked normally Friday, clearing the way for launch.

Making only its eighth flight, the Delta 4 "heavy," the most powerful rocket in the current U.S. inventory, put on a thrilling sky show for thousands of space center workers, tourists and area residents as it arced away to the east over the Atlantic Ocean.

Four minutes after liftoff, two of the three common booster cores making up the Delta 4's first stage shut down and fell away, followed a minute-and-a-half later by shutdown and separation of the remaining first-stage core booster at an altitude of about 90 miles.

The rocket's hydrogen-fueled second-stage engine then took over, firing for another 11-and-a-half minutes to put Orion into an initial orbit with a high point around 550 miles and a low point of just 115 miles.

Along the way, three large support panels were jettisoned as planned from the Orion's service module, followed a few moments later by jettison of a dummy launch abort tower and spacecraft fairing, exposing the capsule to the space environment.

A second 4:42-firing of the second stage RL10B-2 engine was planned at the end of the first orbit to raise the high point of the second orbit to 3,600 miles, higher than any spacecraft intended for piloted operations since the final Apollo moon mission.

Falling back to Earth, the Orion capsule was expected to slam into the atmosphere 75 miles above the Pacific Ocean southwest of San Diego at nearly 20,000 mph, subjecting its heat shield to peak temperatures of some 4,000 degrees Fahrenheit.

After slowing to a more sedate 300 mph, the spacecraft's flight computer was programmed to jettison a protective cover over the top of the capsule, followed by two stabilizing drogue parachutes. If all goes well, three huge main parachutes will unfurl at an altitude of about 1.2 miles to slow the spacecraft to less than 20 mph before splashdown west of Baja California.

Navy recovery forces were stationed nearby to recover the capsule and its parachutes and to carry out an initial assessment of the vehicle's condition. The spacecraft will be hauled back to San Diego and then trucked to the Kennedy Space Center for detailed analysis.

The primary goals of Exploration Flight Test 1 -- EFT-1 -- were to subject Orion's 16.5-foot-wide heat shield to the rigors of re-entry and to make sure its computer hardware, software and navigation systems could endure the higher radiation levels found outside the protection of the Van Allen belts that shield space station astronauts.

Equally important, engineers wanted to verify the performance of the giant braking parachutes and the pyrotechnic systems needed to jettison the service module structural panels, the capsule's launch fairing and dummy abort motor and the protective parachute cover.

"This test flight is a big, big deal, because it's going to give us an opportunity to demonstrate three big things about the vehicle," NASA Administrator Charles Bolden told CBS News earlier in the week. "One, that it is capable of withstanding the temperatures and pressures of re-entry, so we're looking at the heat shield and the structure itself.

"We're looking for how (the spacecraft) performs on orbit, both (under) commands from the ground and autonomously while it's doing things it's programmed to do with its guidance and navigation system. And finally, once it makes its de-orbit and gets through the atmosphere and it's time to decelerate, are the parachutes going to work? ... The proof is in the pudding."

The results of EFT-1 will be fed into the next Orion capsule, already under construction, that will fly in 2018 aboard the maiden flight of NASA's new Space Launch System mega-booster designed to propel astronauts on deep space missions.

If all goes well, astronauts will strap in for Orion's first piloted test flight aboard an SLS rocket in 2021.

NASA's long-range plan is to use the new rocket and capsule to collect samples from a captured asteroid in the mid-2020s before an eventual flight to orbit and land on Mars in the 2030s.

But that will depend on NASA's budget and the continued support of multiple administrations and Congress.

"The American public and their representatives in Congress and the president don't seem to be willing to pay the money to do it any faster," Logsdon said. "NASA's doing the best it can on something like a starvation budget. Every external review that's looked at the program for the past 25 years has said NASA needs more money; you're trying to do a 20-pound program in a 10-pound bag.

"Administrator Bolden can take the steps within his control to put us on a trajectory to Mars, but it will be this president and four or five presidents after this one who will make the decisions -- together with Congress and with the American public -- do we really want to do this?"