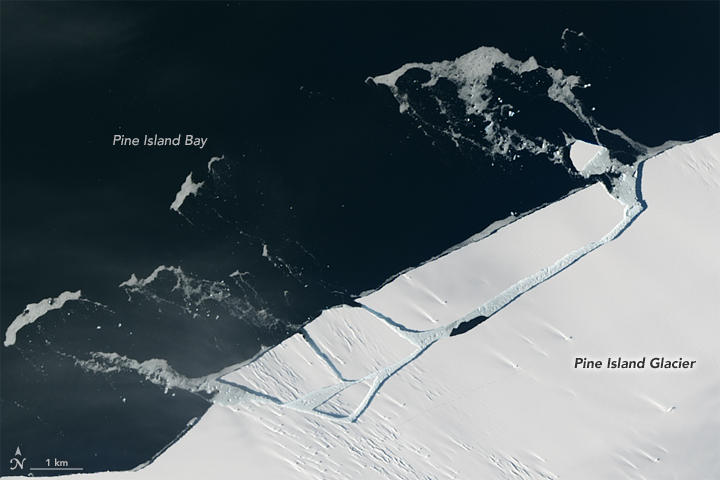 A massive, 1-mile-long chunk of ice has broken off Antarctica’s fast-changing Pine Island Glacier, and NASA satellites captured the dramatic event as the icy surface cracked and ripped apart.

The glacier’s last major iceberg break — an event known as calving — was in July 2015, when an iceberg measuring almost 225 square miles separated from Pine Island Glacier.

The Earth-watching Landsat 8 satellite captured images of the latest iceberg event between Jan. 25 and 29, seeing the progression from the initial crack to the iceberg floating into the bay. Though this latest iceberg is about 10 times smaller than the 2015 event, measuring between 0.6 and 1.2 miles, NASA scientists said the recent break shows how fragile the ice shelf is.

“I think this event is the calving equivalent of an ‘aftershock’ following the much bigger event,” Ian Howat, a glaciologist at The Ohio State University, said in a statement. “Apparently, there are weaknesses in the ice shelf — just inland of the rift that caused the 2015 calving — that are resulting in these smaller breaks.”

More icebergs may break off of the Pine Island Glacier in the near future. NASA has previously photographed small rifts developing about 6 miles from the ice front, and one such rift was observed on Nov. 4, 2016, during one of the agency’s Operation IceBridge flights to monitor the region.

Climate change and the warming ocean have been linked to the the retreat and melt of the world’s ice. According to Howat, such “rapid fire” calving is generally unusual for the glacier, but West Antarctic glaciers are eroding due to the flow of warm ocean water beneath them. A recent study found that the warming ocean was melting an ice crevasse of the Pine Island Glacier at the bedrock level, melting the glacier from its center.

These warmer ocean waters are causing the Antarctic ice shelf to break from the inside out. As such, scientists expect further calving along the glacier and have warned that the West Antarctic Ice Sheet could collapse within the next 100 years.