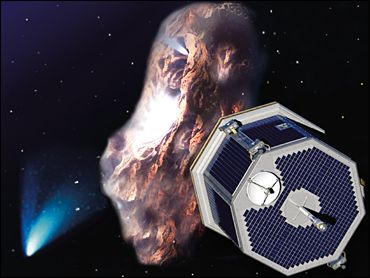 This is a big week for NASA as two of its space probe projects will achieve major goals – the up-close study of a comet and a landing on the surface of Mars.

The first event will take place Friday, when the Stardust probe will fly through the shimmering cloud of dust and gas that envelops comet Wild 2, passing within 186 miles of thedirty ball of ice and rock.

The unmanned probe should make its closest approach at 11:40 a.m. PST. At the time, the comet and probe will be 242 million miles from Earth, mission members said Tuesday at a news conference at NASA's Jet Propulsion Laboratory.

During the flyby, Stardust should capture hundreds if not thousands of particles of dust ripped from Wild 2 (pronounced Vilt-2) by streams of gases boiled from the comet's surface by the warming rays of the sun.

In 2006, Stardust will jettison a canister containing the mitt
during a flyby of Earth. The canister and its extraterrestrial
cargo should plummet down on Utah; Stardust will continue orbiting
the sun.

On Saturday, the first of NASA's twin will land on the surface of Mars.

The lineage of the new rovers, Spirit and Opportunity, is unmistakable. Each one has six aluminum wheels, a boxy body coated with gold and a flat expanse of glossy solar panels - just like Sojourner.

But the new rovers weigh 384 pounds (172.8 kilograms) apiece compared to petite Sojourner's 24 pounds (10.8 kilograms), like a pair of golf carts next to a microwave oven. "They are, in some ways, grown-up versions of Sojourner," said Andrew Mishkin, of the National Aeronautics and Space Administration's Jet Propulsion Laboratory.

NASA calls Spirit and Opportunity the most sophisticated robots ever sent to another planet. If successful, they should roam farther and accomplish more during their 90-day missions than Sojourner did during its own three months of activity.

Spirit is scheduled to land on Mars late Saturday. Opportunity should follow on Jan. 24, landing on the opposite side of the planet. They are supposed to be in operation on the Mars surface for 90 days.

Previous NASA spacecraft - the twin Viking landers in 1976 and Pathfinder in 1997 - have visited just three locations on Mars.

Doubling up boosts the odds of success. About two-thirds of all missions sent to the surface of Mars have failed. The latest may be the British Beagle 2 lander, which has not been heard from since it was to have set down on Mars in late December.

The Mars Exploration Rovers are relying on the same air bag system that the Pathfinder lander used to cushion its landing on the rocky surface of Mars. NASA's failed Polar Lander, which crashed in 1999, did not.

Unlike Pathfinder, the landers that deliver Spirit and Opportunity to the surface will cease to play any role once they're left behind by the two rovers.

Spirit and Opportunity were designed to carry all the communications and camera equipment that was split between Sojourner and its Pathfinder lander.

"We have effectively merged the capability of the Pathfinder lander and the Sojourner rover into one larger rover," said Mishkin, who heads the team that develops the instructions that will be sent to the two robots each day.

"In a sense, we have taken the Pathfinder lander and put it on wheels. If you think about that, you'd say 'How did they make it so small?"' he added.

NASA expects it will take each rover nine days of preparation before it's ready to trundle off.

The mission was designed to examine rocks and soil for evidence the planet once may have been a wetter place hospitable to life, and mission members boast that each rover should reconnoiter its surroundings nearly as skillfully as would a human rockhound.

"It's a robotic geologist doing the science - the same things we would be doing if we could get ourselves there," said Jim Bell, a Cornell University astronomer and member of the mission's science team.

Sojourner, more technology demonstration than geology whiz, carried a single primary science instrument. Spirit and Opportunity each carry a version of the same instrument, plus a half-dozen more.

"If successful, Spirit and Opportunity will help humans take a giant leap forward in their understanding of Mars' potential as a site for past or current life," said Ed Weiler, NASA's associate administrator for space science.

Spirit was launched from Cape Canaveral in June and Opportunity took off in July. During their flights, adjustments were made in their trajectories to ensure that the landers carrying the two rovers entered the Martian atmosphere on course.