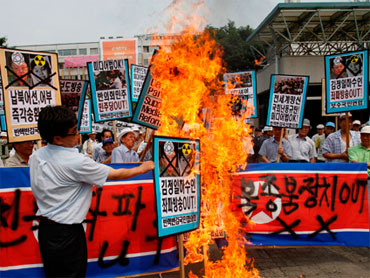 North Korea seized a fishing boat from the South on Thursday after it accidentally strayed into the North's waters, officials said, amid tensions on the peninsula over Pyongyang's nuclear and missile programs.

Seoul asked the North to quickly release the vessel and the four crew members, a Unification Ministry spokeswoman said.

Early Thursday morning, a North Korean patrol boat took the 29-ton vessel "800 Yeonan" into custody after it crossed into the North's eastern waters - apparently because its satellite navigation system malfunctioned, an official at South Korea's Joint Chiefs of Staff said.

The official, who spoke on customary condition of anonymity, said the boat was taken to North Korea's eastern port of Jangjon, just north of the border.

The Unification Ministry, which is responsible for handling relations with the North, made a formal written request to North Korean maritime authorities asking for the boat's release, spokeswoman Lee Jong-joo said.

North Korea confirmed it had received the request and said by telephone that it would look into the matter, Lee said. North Korea's state news agency, monitored in Seoul, did not mention the seizure.

Relations between the two Koreas deteriorated last year after a pro-U.S., conservative government took office in Seoul, advocating a tougher policy on the North. In retaliation, Pyongyang cut off ties and halted all major joint projects except a joint industrial complex located just across the border in North Korea.

The North has been holding a South Korean worker at the complex since March for allegedly denouncing its political system. South Korea has repeatedly demanded his release, but so far the North has not allowed Seoul officials any access to him.

The two countries remain technically in a state of war because their 1950-53 Korean War ended with an armistice, not a peace treaty. Both keep a close watch on their land and sea borders.

Maritime incidents between the two sides involving fishing boats and other commercial vessels occur from time to time and are generally resolved amicably.

In August last year, North Korea allowed a South Korean cargo vessel to return home after investigating its crew members over a collision with a North Korean fishing boat that left two North Koreans dead. The accident occurred in waters north of the eastern sea border.

The opposite western maritime border has been the scene of deadly fighting between the two rivals.

In June 2002, six South Korean troops died when North Korea sank a South Korean patrol boat in the area. In June 1999, about 30 North Korean sailors are believed to have died when their boat sank in a clash with South Korea, the first naval conflict between the two sides since the Korean War.