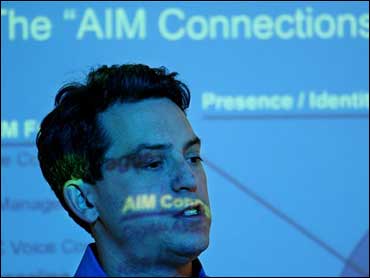 It's only natural for companies large and small to want to capture some of the social-networking magic of MySpace.com, a Web site that has risen out of nowhere to become the Internet's second busiest by successfully figuring out what teens and young adults want.

AOL joined the pack this month with its own take on social networking, a loose term for services that help users expand their circles of friends by exploiting existing connections, rather than meeting randomly or by keyword matches alone.

The rapid growth of MySpace and last year's purchase of its parent company by Rupert Murdoch's News Corp. for $580 million "definitely accelerated something," said Greg Sterling, an industry analyst with Sterling Market Intelligence in Oakland, Calif.

"MySpace went from being this curiosity to a cultural phenomenon," Sterling said. "People started to think this is a really, really big opportunity."

MySpace offers a mix of features — message boards, games, Web journals — designed to keep its youth-oriented visitors clicking on its advertising-supported pages. The site has successfully built communities around music, becoming the go-to place for emerging bands. It wants to replicate that success in film and comedy.

Driven largely by word of mouth, MySpace grew astronomically since its launch in January 2004 and is now second in the United States among all Web sites by total page views, behind only Yahoo Inc., according to comScore Media Metrix.

MySpace's user base more than quadrupled to nearly 80 million over the past year, with as many as 270,000 joining every day.

Yahoo even announced a home page redesign this week in part to fend off the rising threat, adding recommendations and insights about cultural trends culled from its community of 402 million users worldwide.

Others, mostly startups, are hoping to become the next-generation MySpace, offering more-robust, easier-to-use tools or specialized features for niches.

CollectiveX Inc. launched this month as a network for professionals and other pre-organized groups. Famoodle started in April as a MySpace for families. Relative newcomers Tagged Inc. and Varsity Media Group Inc.'s Varsity World are billing themselves as safe havens for teens.

The most notable of the newcomers is AOL's AIM Pages, which is building upon its already substantial instant-messaging base of 49 million active users worldwide. Still, MySpace's number is higher — the active subset of registered users who logged on in March was 56 million, according to comScore.

Nonetheless, Bankoff denied AOL was positioning AIM Pages as "a MySpace killer." Rather, he said, the entrance by Time Warner Inc.'s Internet unit "points to the trend of consumers wanting to express themselves in a more powerful way."

AIM users get a page customizable with any number of drag-and-drop modules for maps, Web journals and other features, including those from rivals like Yahoo's Flickr photo site. By contrast, MySpace users must deal with HTML programming code to customize.
The offering, available in a beta test mode, underscores AOL's history of playing down innovation in favor of waiting until the masses are ready. It wants to be easy, not necessarily first.

MySpace wasn't first, either. But it surpassed Friendster Inc. in monthly visitors just a half-year after formally launching.

Analysts note that if Friendster can fall, so can MySpace.

"It's like the one hot bar or restaurant everybody descends upon," Sterling said. "Then it gets cold and people leave it."

MySpace, whose press representatives said executives were unavailable for interviews, has been continually adding features, including just recently a test version of an instant-messaging program and the hit TV show "24" as free and for-pay downloads.

A Microsoft Corp. spinoff company, though mum on specifics, plans to launch Wallop later this year with promises of helping people better interact more like they would in the real world.

That's also the thinking behind CollectiveX.

So members of pre-existing groups, such as a homeowners association, could use CollectiveX to communicate and meet one another — but only if someone they already know introduces them.

Groups are visible only to their members, and even within groups, a person's friends and colleagues are described only by title, not by name. By contrast, MySpace makes most profiles publicly viewable and users easily reachable.

Meanwhile, some startups see MySpace as the new mass media — too big to appeal to any one demographic group well.

Adir Levy figures that once people get married, they're no longer keen on meeting new faces on MySpace, where about a quarter of the users are minors. So he developed Famoodle as a site for families to connect and expand existing relations.

"We definitely don't see us as becoming as big as MySpace, but we see ourselves as being the MySpace for the more mature crowd," said Levy, 25, who's getting married this year.

Others are targeting teens, the group that has turned MySpace into a lightning rod for warnings about the dangers posed by sexual predators on the Internet.

At Varsity World, moderators screen most writings, photos and other materials before posting. Tagged has features — among them, a weekly celebrity lookalike contest — likely to be seen as immature by even college students, said its founder, Greg Tseng.

"MySpace and the industry as a whole is really in the first inning," Tseng said.

MySpace's 80 million users is but a fraction of the estimated global online population of 1 billion.

Charlene Li, an analyst at Forrester Research, said users also can have multiple profiles at multiple sites — the way they may belong to separate school, work, neighborhood and church networks in the offline world.

But not everyone will have time to keep up. In fact, only about 60 percent of MySpace's U.S. registered users visited the site in April, according to calculations of data from MySpace and Nielsen/NetRatings.

"You may have four or five e-mail addresses, but you use two of them," Sterling said. "You're going to go to one or two places. You're not going to go to four."