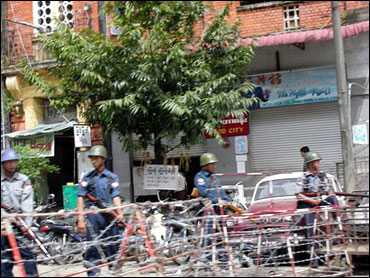 Soldiers clubbed and dragged away activists while firing tear gas and warning shots to break up demonstrations Friday before they could gain momentum. Troops also occupied Buddhist monasteries and cut Internet access, raising fears that a deadly crackdown was set to intensify in Myanmar.

The moves raised concerns that the junta may be preparing to intensify a crackdown on civilians that has killed at least 10 people in the past two days. The Internet in particular has played a crucial role in getting news and images of the pro-democracy protests to the outside world.

The clash in an area near the Sule Pagoda was the most serious of the several sporadic protests that were reported Friday in Myanmar's biggest city. But the crowds were much smaller compared to the tens of thousands of people that have poured into the streets over the past week, demanding the military junta step down and restore democracy.

Australia's ambassador to Myanmar said Friday he has heard that "several multiples of the 10" have been killed by the military.

British Prime Minister Gordon Brown also questioned the number of deaths caused by the junta's crackdown, saying Friday he believed it was "far greater" than what was being reported.

"We certainly support the people who are marching for democracy and for peace," Stanzel said. President Bush discussed the situation Friday during a secure video conference with British Prime Minister Gordon Brown, reports Maer.

According to one of the few Western journalists still inside Myanmar, also known by its pre-junta name, Burma, troops had surrounded several key Buddhist monasteries Friday.

Rosalind Russell told Britain's Sky News in a phone interview that it wasn't clear whether the monks were still inside the compounds, or if they had been cleared out and forced back to their home villages by the military.

Officials in Thailand said Friday planes were on standby to evacuate foreigners if the situation inside Myanmar deteriorates.

At least 10 people have been killed in the last two days, including a Japanese cameraman who was shot when soldiers with automatic rifles fired into crowds.

Australian Ambassador Bob Davis said Friday he had heard unconfirmed reports of many more casualties than the 10 that Myanmar authorities acknowledged were killed by troops in the capital, Yangon.

"We spoke to a number of people overnight last night before the curfew provisions applied (and) we have individual reports from them of seeing ... significantly more than that number of dead being removed from the scene," Davis told Australian Broadcasting Corp. radio by telephone.

"Several multiples of the 10 acknowledged by the authorities," he said, adding that no figure had been confirmed.

In addition to widespread fears that the death toll from the government crackdown was higher than reported, CBS News correspondent Barry Peterson reports that today the country was rife with rumors of mutiny among the military.

Andrew Spooner, a British journalist in Myanmar, told Petersen he had unconfirmed reports that an army division had joined the protestors in Yangon. A dissident Web site in London even reported than a major figure in the junta had switched sides.

The United States imposed new sanctions on a dozen senior Myanmar officials, including the junta's two top generals, and again urged China as Myanmar's main economic and political ally to use its influence to prevent further bloodshed.

Police sealed off a Yangon neighborhood after hundreds of protesters defied the government's orders and the violence of previous days to take to the streets. They were quickly dispersed without bloodshed. Elsewhere, witnesses said the streets were mainly quiet.

Russell, a freelance journalist reporting from Yangon, said there were very few monks on the streets Friday - in sharp contrast to the previous days of demonstrations - and that it was now mostly young civilian men leading the protests.

Southeast Asian envoys were told by Myanmar authorities that a no-go zone had been declared around five key Buddhist monasteries, one diplomat said, raising fears of a repeat of a democratic uprising in 1988, when troops gunned down thousands of peaceful demonstrators and imprisoned the survivors.

Gates were locked and key intersections near monasteries in Yangon and Mandalay were sealed off with barbed wire. There was no sign of monks.

"We were told security forces had the monks under control" and will now turn their attention to civilian protesters, the Asian diplomat said on condition of anonymity, citing protocol. Getting the monks out of the way raised concerns that the government would now feel emboldened to take tougher measures against remaining protesters, the diplomat said.

Russell confirmed the reports that Myanmar's one Internet server had been shut down, and said the government had told people it was down for maintenance.

After more than a week of images from Myanmar, showing worldwide audiences dramatic images of defiant monks and angry protestors, new pictures from the country were much harder to come by on Friday.

Myanmar's neighbor's showed their disdain at the violent turn the situation has taken. Demonstrations against Myanmar's junta were seen across Asia in Malaysia, Thailand, Japan and elsewhere. The Association of Southeast Asian Nations expressed "revulsion" and told the junta "to exercise utmost restraint and seek a political solution," with pro-democracy demonstrations held or planned in several cities across the region.

Among the people killed in two days of violence was a Japanese cameraman who was shot when soldiers with automatic rifles fired into crowds demanding an end to military rule.

Japanese officials said Friday they would press Myanmar for a full explanation of the death of Kenji Nagai, but they had not decided to suspend humanitarian aid to the impoverished country.

Officials have said Nagai was believed to have been shot in the chest. There were conflicting reports that he was struck by stray bullets fired by Myanmar soldiers or shot directly from the front.

"We offer our prayers and condolences for him," Chief Cabinet Secretary Nobutaka Machimura said. "I think what's most important at the moment is to get a full accounting of what happened."

Machimura added Tokyo would be monitoring the situation closely, but "was not immediately thinking about suspending aid."

Daily demonstrations by tens of thousands have grown into the stiffest challenge to the ruling military junta in two decades, a crisis that began Aug. 19 with rallies against a fuel price hike, then escalated dramatically when monks began joining the protests.

Hundreds of people have been arrested, carted away in trucks at night or pummeled with batons, witnesses and diplomats said, with the junta ignoring international appeals for restraint.

But by Myanmar standards, the crackdown has so far been muted, in part because the regime knows that killing monks, who are highly revered in the deeply Buddhist nation, could trigger a maelstrom of fury.

Thursday was the most violent day in more than a month of protests - which at their height have brought an estimated 70,000 demonstrators to the streets. Bloody sandals lay scattered on some streets as protesters fled shouting "Give us freedom, give us freedom!"

Truckloads of troops in riot gear also raided Buddhist monasteries on the outskirts of Yangon, beating and arresting dozens of monks, witnesses and Western diplomats said.

"I really hate the government. They arrest the monks while they are sleeping," said a 30-year-old service worker who witnessed some of the confrontations from his workplace. "These monks haven't done anything except meditating and praying and helping people."

Images of bloodied protesters and fleeing crowds have riveted world attention on the escalating crisis, prompting many governments to urge the junta in Myanmar, also known as Burma, to end the violence.

The United Nations' special envoy to Myanmar, Ibrahim Gambari, was heading to the country to promote a political solution and could arrive as early as Saturday, one Western diplomat said on condition of anonymity.

Though some analysts said negotiations were unlikely, the diplomat said the decision to let Gambari in "means they may see a role for him and the United Nation in mediating dialogue with the opposition and its leaders."