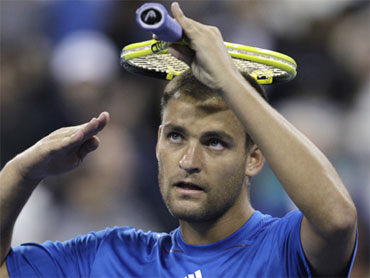 Murray alone bears the burden of Britain's hopes for its first male Grand Slam champion since 1936. He was a popular pick to go far at Flushing Meadows; he was the runner-up at the 2008 U.S. Open and at this year's Australian Open, also on hard courts.

"I have no idea whether I'll win a Grand Slam or not. I want to. But if I never win one, then what? If I give 100 percent, try my best, physically work as hard as I can, practice as much as I can, then that's all I can do," said the 23-year-old Murray, who was treated by a trainer for leg and elbow issues. "It's something I would love to do. It's a very difficult thing. I don't know if I'll win a Grand Slam or not. But I'll give it my best shot."

He served poorly against Wawrinka, putting only half of his first serves in and getting broken eight times.

It's been seven years since a man from the United States won the country's most important tennis tournament. Indeed, it's been that long since an American man won any Grand Slam singles title.

The 20th-seeded Querrey is all too aware of such statistics.

"The average sports fan watches the Grand Slams, and they watch on Saturday and Sunday and the semis and the finals," said the 22-year-old Querrey, the youngest man left in the field. "That's what we need to do. We need to get some guys there."

Isner, best known for winning the longest match in tennis history at Wimbledon in June, got broken early in each of the first two sets, then was down 5-1 in the second, before making things interesting. But Youzhny came up with one of his five aces to end the third-set tiebreaker, then broke the 6-foot-9 Isner again early in the fourth. Youzhny heads to the U.S. Open's fourth round for the first time since he was a semifinalist in 2006.

Fish will take on No. 3 Novak Djokovic of Serbia in the third round. Querrey never has been to the quarterfinals at a major tournament, nor has Wawrinka.

Wawrinka's win was the only significant surprise on a day that saw No. 1 Rafael Nadal and four other Spaniards advance: No. 8 Fernando Verdasco, No. 10 David Ferrer, No. 23 Feliciano Lopez, and unseeded Tommy Robredo.

"Probably the most difficult tournament for us, no?" Nadal said after beating Gilles Simon of France 6-4, 6-4, 6-2. "So that is very important news for Spanish tennis."

When Andy Roddick — the American who won the 2003 U.S. Open — briefly dropped to 11th in August, it was the first time since the rankings began in 1973 that there were no U.S. men in the top 10. That alone was enough to cue a new chorus of questions about the state of the game in a nation that produced Pete Sampras and Andre Agassi, Jimmy Connors and John McEnroe.

With Sunday's five Spaniards joining No. 21 Albert Montanes, who won Saturday, that country has six members of the last 16 — tying the record for a country other than the United States at the U.S. Open.

Ferrer beat Daniel Gimeno-Traver of Spain 7-6 (2), 6-2, 6-2; the opponents of Robredo and Lopez retired during their matches. The winners of Nadal vs. Lopez, and Ferrer vs. Verdasco will meet for a semifinal spot.

"I don't really care whom I'm playing against," Nadal said, "if they're all Spaniards."

There is only one American woman left, and it's seven-time Grand Slam champion Venus Williams, who struggled with her serve and kept yanking at the hemline of her red, sequin-dotted dress but eventually beat 16th-seeded Shahar Peer of Israel 7-6 (3), 6-3 to reach the quarterfinals in New York for the 10th time.

Williams put 48 percent of her first serves in, and was broken three times. She wasted her first six set points in the opening tiebreaker. And yet she improved to 6-0 against Peer. Williams next faces reigning French Open champion Francesca Schiavone of Italy, a 6-3, 6-0 winner against 20th-seeded Anastasia Pavlyuchenkova.

Williams was the last woman to win the U.S. Open two years in a row, in 2000 and 2001, and defending champion Kim Clijsters of Belgium is trying to match that feat. Clijsters easily got past former No. 1 and 2008 French Open champion Ana Ivanovic 6-2, 6-1 of Serbia on Sunday.

"The pressure is a privilege. It's something that comes because you've done well in the past, and I look at it in that way," said Clijsters, who will play No. 5 Sam Stosur of Australia or No. 12 Elena Dementieva of Russia in the quarterfinals. "I know how hard it is to try and win those seven matches and how much you have to be focused and work, especially on the details."

She won seven consecutive games in one stretch to seize control, and her deep groundstrokes and usually strong defense put pressure on Ivanovic, who made 28 unforced errors.

"I was on the big stage again," said Ivanovic, whose ranking dropped to 65th in July but now is back up to 40th. "Lots of emotions came back, and I just felt a little slow and just a little bit out of it."