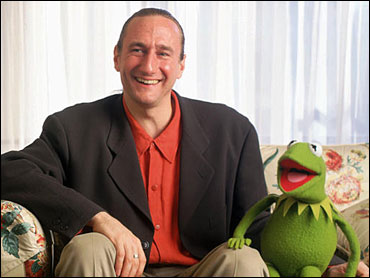 The family of Muppet creator Jim Henson has succeeded in a last-minute bid to repurchase the company they sold to a German media firm in 2000.

The Henson family decided only two weeks ago to bid for The Jim Henson Co., which they will buy for a fraction of what Munich-based EM.TV paid for it, according to Brian Henson.

Munich-based EM.TV bought the company and rights to such Muppet characters as Kermit the Frog and Miss Piggy in February 2000 for $680 million in cash and stock.

But in May 2001, it said it was considering selling the Los Angeles-based firm. It has since sold some Henson assets, including the "Sesame Street" rights, for about $200 million.

On Wednesday, it said it was selling the rest of Henson for $78 million in cash and was keeping the $11 million that the Henson operation had on hand.

"The family has been watching on the sidelines, sadly watching, as EM.TV collapsed and never even started the plan they were going to do and then painfully watching as the company was put back on the market," Henson said in an interview.

"Both out of concern for where the company might end up and the legacy of Jim Henson, and 'enough is enough,' we decided to come back in to run the company," he said.

Other companies thought to have made bids included The Walt Disney Co. Disney planned to buy Henson at least once before, but that deal fell apart shortly after Jim Henson's death in 1990.

On Wednesday, Brian Henson, 39, would not say if his family's bid was prompted by concern that the Muppets would be bought by Disney.

"Disney is a terrific company," Henson said. "We only have the highest respect for Disney as a company."

Jim Henson founded his self-named company in 1958, inventing the term "muppet" as a cross between the words marionette and puppet.

The buyers include five Henson children: Brian, a brother and three sisters. The assets they bought include The Muppets, The Muppet Babies, The Fraggles, The Hoobs, Farscape, and Bear in the Big Blue House.

Henson said his family decided to sell in 2000 because as independent producers they could not raise enough cash to become the kind of vertically integrated media company they felt they needed to be to survive.

"It was looking like we wouldn't even get on the air if we didn't own a TV channel," Henson said. "We decided the 'grow bigger' scenario was the best for the company."

Unfortunately, Henson said, EM.TV never followed through on its promise to spend money to market the Muppet characters and produce new television and movie projects.

"Instead, the emphasis of the company went to 'What can we split off and sell' as opposed to 'How do we build up the Muppets," he said.

The family also suffered from EM.TV's problems as they watched the stock they acquired as part of the sale sink in value.

Henson said the family had hoped that after the success of "The Very Muppet Christmas Movie" on NBC the company would sell quickly.

"It did extremely well and for anybody looking to buy the company, it was a very solid bit of evidence that the Muppets are 'top of mind' in America and not just a nostalgic piece of history," he said.

Henson said the family stood by while EM.TV tried to find a buyer, then decided they needed to take quick action to regain control.

"We had always been watching the negotiations very closely," he said. "Some of the bidders we felt not so great about and some we felt good about. At a certain point, enough was enough and we said, 'We'll own it, we'll operate it and we'll feel good about it."'

Henson said all five family members will serve on the company's board and that he and his sister Lisa will be actively involved in management.

"It will be a very active board," Henson said.