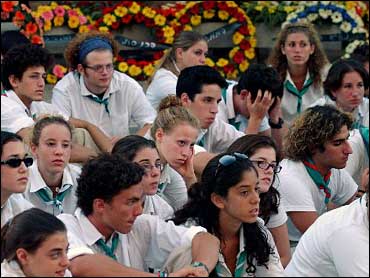 The Israeli athletes were enjoying a rare night out. With a break in the competition at the Munich Olympics, they went to watch a performance of "Fiddler on the Roof" before heading back to their rooms at the Olympic Village.

Settling into bed in the early morning hours of Sept. 5, 1972, they went to sleep blissfully unaware of the eight members of a shadowy Palestinian terrorist group called Black September making their way toward the athletes' housing complex.

Dressed in track suits, their athletic bags filled with Kalashnikovs and hand grenades, the terrorists mingled among tipsy American athletes coming in for the night. With ease, they hopped the 6-foot fence surrounding the village.

Shortly after 4 a.m., wrestling referee Yossef Gutfreund heard a noise at the door and went to investigate. Opening it, he saw the barrels of submachine guns.

"Take cover, boys!" he shouted before trying to close the door on the terrorists.

Startled out of their sleep, a few Israelis managed to get out a back door; others left through a window. The attackers burst into a bedroom where wrestling coach Moshe Weinberg lunged at one with a knife and was shot in the face. In another room, weightlifter Yossef Romano grabbed a gun from one terrorist and was promptly shot to death by another.

Nine other athletes - including an American competing on the Israeli team - would be captured before they could flee. They were tied hand and foot to furniture in a bloody third-floor bedroom.

Soon the world - thanks to new satellite technology that beamed the games to a billion people - would watch in horror as a drama far more compelling than any sporting event played out in the Olympic Village.

By the time the hostage standoff ended 21 hours later in an ill-conceived rescue attempt, 11 Israeli athletes and coaches, five terrorists and one West German police officer were dead.

The games would go on, but they'd never be the same.

Israeli commandos later hunted down and killed most of those involved in planning and carrying out the attack. And Sept. 11 eclipsed Munich as the most shocking and outrageous terror attack the world had seen.

Thirty years later, there is a small monument outside the Olympic stadium honoring those who died. But time hasn't healed everything, especially for the relatives of the victims, who still battle Olympic officials and the German government over the aftermath of the killings.

"So many fatal mistakes, such negligence and such stupidity," says Ankie Spitzer, widow of fencer Andrei Spitzer. "They should have protected my husband and the other athletes and they didn't."

In an interview with CBS News Correspondent Robert Berger, Spitzer says in the wake of both the horror in Munich and the terror attacks on Sept. 11, she believes the world still has not learned its lesson.

"I just have the feeling that the world didn't learn and doesn't know how to react to international terror," says Spitzer, wondering how it could be that Yasser Arafat could have won the Nobel peace prize, twenty years after Munich.

Israel, which had observers on the scene in Munich, has never wavered in its insistence that Arafat was behind the killings. Arafat, who is now the Palestinian President, has similarly never wavered in his denial of that accusation.

Former Palestine Liberation Organization guerrilla Mohammed Oudeh, better known by the code name Abu Daoud, wrote in a book in 1999 that Arafat was briefed on plans for the Munich hostage-taking but added that the intent was never to kill the Israeli athletes. Israeli and American intelligence experts have long implicated Oudeh and the PLO in planning the attack that ultimately left 17 dead.

By today's standards, security in Munich was almost laughable. A single chain-link fence protected the village, and athletes looking for a shortcut home often scaled it after a night out.

There was no barbed wire, no cameras, no motion detectors, no barricades. At the entrance, unarmed guards in powder blue shirts looked more like ushers at Disneyland.

In Athens in 2004, some $600 million will be spent on security. In Munich, only about $2 million was allocated to protect the athletes.

On that day, before the horror struck, Ankie Spitzer wasn't supposed to be in the village, but she roamed it freely with her husband nonetheless. In fact, the village was crammed with people who talked their way past the guards, entered through unattended exits or hopped the fence.

"We would walk in through the exit," she said. "They hadn't figured out they should guard that, too."

The Germans had their reasons for minimizing security. The village was less than 20 miles from the site of the Dachau death camp, and the hosts were determined not to give the games a militaristic look. Hitler's games of 1936 were still a vivid memory.

These Olympics were called "The Games of Peace and Joy," and they lived up to that nickname for 10 days, with spectacular performances by U.S. swimmer Mark Spitz and Soviet gymnast Olga Korbut.

That all changed on the morning of Sept. 5. From then on, Munich would forever be remembered for men in ski masks, smoldering helicopters and flag-draped coffins returning to Israel.

The terrorists demanded that more than 200 Palestinians be released from Israeli jails. They tossed Weinberg's bloodied body into the street to show they meant business.

Astonishingly, life went on in the village with little disruption. Rock music blared, ice cream stands did a lively business and pingpong tables were filled with players. Athletes seemed oblivious to the fact that a few hundred feet away, nine competitors were blindfolded and bound to a bedpost in Spitzer's bedroom.

As a 5 p.m. deadline to kill the hostages passed and with International Olympic Committee president Avery Brundage pressing German authorities to move the siege out of the Olympic Village, negotiators drew up a plan to fly the terrorists and their hostages to a nearby air base.

At one point, Spitzer was brought by the terrorists to a window, where they ordered him to say in German that the hostages were alive. As he got the words out, a terrorist hit him in the head with the butt of a rifle and dragged him off.

It was the last time Ankie Spitzer would see her husband alive.

At the military airport at Furstenfeldbruck, a Boeing 707 was supposed to take the terrorists and their hostages to Cairo. Inside the plane were police dressed as crew members who were to attack the gunmen and free the victims.

Just minutes before the helicopters arrived, though, the police on the plane decided they wanted no part of a suicide mission. They took a vote and decided to get out.

"We were trained for everyday offenses, to be close to the people, unarmed - but not for an action against paramilitary-trained terrorists," former Munich police chief Manfred Schreiber said during a 1996 interview.

Police had to switch to a new plan. Sharpshooters were supposed to open fire as the terrorists approached the plane, killing the leaders and hoping the rest would surrender.

The Germans, though, thought there were only five terrorists when there were actually eight. And they had only five sharpshooters, whose rifles didn't have scopes or night-vision devices and who could not communicate with each other.

They weren't exactly trained snipers, either.

"I am of the opinion that I am not a sharpshooter," an officer identified as "Sniper No. 2" said in German investigative papers.

The terrorists knew they had been duped when they boarded the empty plane. They ran back toward the helicopters, and gunfire broke out.

The helicopter pilots fled, but the hostages, who were tied up inside the craft, couldn't. At one point, terrorists threw grenades in the helicopters and sprayed them with gunfire. Armored cars that would have allowed police to storm the helicopters were stuck in traffic outside the air base.

When the smoke cleared, everyone was dead except for three wounded terrorists. They would be jailed, only to be released two months later in trade for a hijacking that many people suspected was a convenient way for Germany to get rid of its problem.

In the confusion, reporters were told that all the hostages had been saved. Spitzer's father wanted to open a bottle of champagne to celebrate, but his wife refused until she saw her husband alive.

A few hours later, authorities delivered the sad news to the world.

The next day, Ankie Spitzer sat in the Olympic stadium along with the 11 Israeli Olympians who escaped. They wore white yarmulkes and maroon blazers and silently watched a hastily arranged memorial service for the dead athletes.

IOC President Avery Brundage never once referred to the athletes during a speech in which he praised the strength of the Olympic movement.

The Israelis, and many others who listened in shock, were outraged.

The Olympics paused only one day before resuming.

"Incredibly, they're going on with it," Los Angeles Times columnist Jim Murray wrote. "It's almost like having a dance at Dachau."

Since then, survivors and relatives have pushed for - but never received - a moment of silence to be held at succeeding Olympics.

"They always accused me of wanting to bring politics into the Olympics, and that the Arab countries would walk out," Ankie Spitzer said. "I said, 'Not at all. You don't even have to mention politics or Israel. Just say they were Olympians, part of the dream."'

For 20 years, the Germans also rejected her attempts to find documents about the botched rescue, insisting there were none. An informer finally sent her some of the files 10 years ago, and others were opened for review.

Israeli secret operations forces hunted down and killed the Palestinians whom they held responsible. It was left to the relatives to seek justice from the Germans.

"Sure the terrorists were responsible, but the Germans were supposed to protect all the athletes," Ankie Spitzer said. "Afterwards, when they were taken hostage, they had no clue what to do."

At a memorial service last month, 25 relatives returned to the Munich stadium for a one-hour ceremony at the monument to the victims - a large stone tablet placed at the bridge linking the former Olympic village to the stadium.

The names of the dead are etched in the stone in German and Hebrew, with the words: "In honor of their memory."

An Israeli flag was draped across the tablet, with 11 candles burning and fresh wreaths laid at the foot of the monument. Six Israeli flags fluttered in the wind.

Ankie Spitzer wonders whether a world shocked by Sept. 11 will learn from those who try to forget another day in September 30 years ago.

"The saddest thing for me is to see what happened in New York and get the feeling if people responded the right way 30 years ago and the world said, 'This cannot be,' that things might have been different," she said.

"My husband didn't come with a weapon; he was not a soldier. He came to participate because it was his absolute dream to be a part of it."