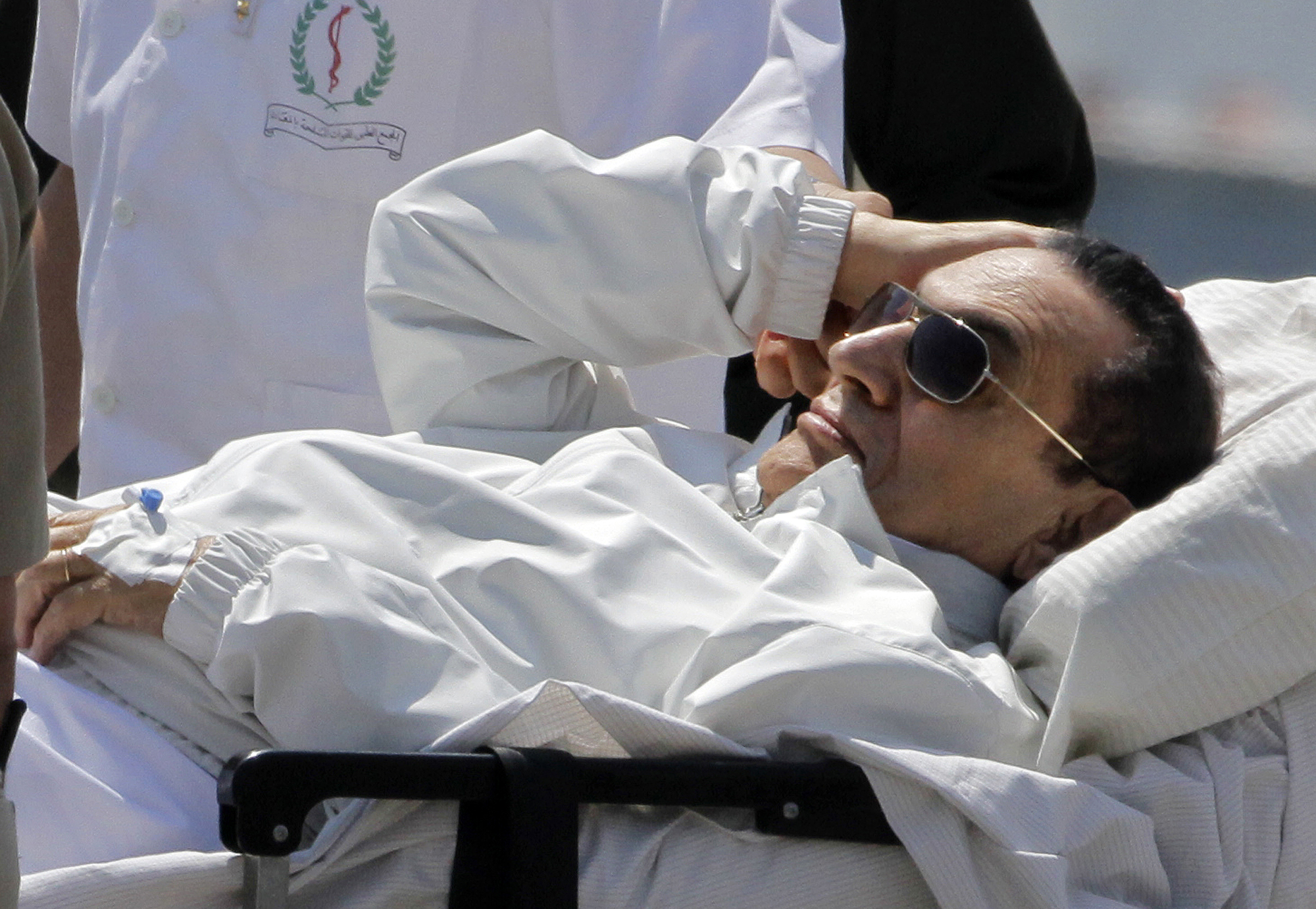 CAIRO The judge in Hosni Mubarak's retrial recused himself at the start of the first session on Saturday, citing a conflict of interest as the former Egyptian president appeared in court for the first time in 10 months grinning and waving to supporters.

The recusal threw the case deeper into disarray after an appeals court in January overturned a life sentence for Mubarak on a conviction for failing to prevent the killings of protesters during the 2011 uprising that ousted him.

The appeals court granted Mubarak a retrial after ruling that in the first trial, the prosecution's case lacked concrete evidence and failed to prove that protesters were killed by the police during the bloodiest days of the revolt. Some 900 people were killed in the 18-day uprising, most of them in the initial days.

Hoda Nasrallah, a rights lawyer representing 65 victims' families in the case, said there is no certainty that the prosecution will provide new evidence this time around to back up the charges.

The judge in the first trial criticized the prosecution for failing to provide evidence that police killed protesters. Protesters accused attorney general's office of shoddy work in collecting evidence. The attorney general at the time was a Mubarak-appointee who has since been replaced.

"The investigations took place in just one month, which is not enough time to review all the cases of killings across Egypt," Nasrallah said. "There are reports in the media that there will be new evidence submitted, but we're waiting to see if that is true."

Mubarak's first trial took place in a charged atmosphere that eclipsed the legal nuances of the case and led to what many saw as a politically motivated verdict aimed at calming a public outcry for justice after nearly 30 years of authoritarian rule.

Rumors had swirled several times in the past year that Mubarak was near death. However, the 84-year-old appeared upbeat in his first court appearance since his conviction in June 2012.

After being wheeled into the courtroom on a hospital gurney, he sat upright and grinned and waved to his supporters from inside the metal defendant's cage. His eyes were shaded behind brown-tinted glasses.

Mubarak's two sons, Alaa and Gamal, and his former Interior Minister Habib el-Adly were in the cage with him. They are currently imprisoned in separate cases. El-Adly, who was in charge of police during the uprising, was convicted of the same charges as Mubarak in his first trial and also sentenced to life in prison. His sentence was also overturned by the appeals court.

Mubarak was airlifted by a military helicopter to the court while his two sons and el-Adly were driven from Tora prison in the outskirts of Cairo.

The session lasted only a few minutes, ending after Judge Mostafa Hassan recused himself and referred the case to an appeals court to appoint another judge. He did not explain the conflict of interest behind the decision.

As he took the bench, some lawyers shouted, demanding that he remove himself from the case.

"Sit until you hear what the court's decision is," the judge responded.

Immediately after, he announced that the case would be sent to an appeals court. Some lawyers began chanting: "The people demand the execution of the ousted president!"

Local media reports had suggested Hassan might transfer the case to another judge. In October, he caused an uproar among political activists when he acquitted 25 Mubarak loyalists accused of organizing a deadly Camel Battle attack during the uprising. In the attack, assailants on horses and camels stormed downtown Cairo's Tahrir Square, the epicenter of the protests.

If convicted again, the life sentences for Mubarak and el-Adly could be upheld or their sentences could be reduced. They could also be acquitted but is considered unlikely that they would draw a heavier sentence, such as the death penalty.

In addition to the charges related to deaths of protesters, Mubarak and his sons face corruption charges in the trial along with longtime business associate, Hussein Salem, who is currently on the run in Spain. Five police generals face the same charges as Mubarak with relation to the killing of protesters while a sixth is accused of gross negligence.

Mubarak's two sons and the six police generals are being retried after prosecutors filed an appeal against their acquittals.

The outcome of Mubarak's first trial prompted mass protests against the mixed verdict, which sentenced the former president to life in prison but did not offer anything close to full accountability for wrongdoing under his three decades in power.

The scene outside of the courthouse on Saturday reflected the change in the political atmosphere since the emotional outbursts that surrounded Mubarak's first trial in August 2011.

Hundreds flocked to the courtroom for his first trial and Egyptians and others in the region were glued to televisions in near-disbelief at seeing the former autocrat in a courtroom defendant's cage — something that symbolized to many the people's triumph over dictatorship.

The retrial drew only a few dozen Mubarak opponents and supporters, who briefly threw stones at each other before police intervened.

More than two years after his ouster, Egyptians are reeling from myriad problems that include fuel shortages, growing unemployment and political polarization. The strains occasionally erupt into deadly street battles.

Mubarak has remained in custody since his conviction, spending some time in a prison hospital before being transferred to a military one on grounds that he needed better medical care. Prosecutors are requesting he be transferred back to a regular prison.

A high-level inquiry into the deaths of the nearly 900 protesters killed in the uprising, parts of which were released exclusively to The Associated Press last month, could weigh heavily in the retrial. It found that police were behind nearly all the killings, using snipers on rooftops overlooking Tahrir Square to shoot into huge crowds.

The inquiry determined that such deadly force could only have been authorized by security chief el-Adly with Mubarak's full knowledge. It determined that Mubarak watched the uprising against him unfold through a live TV feed at his palace, despite his later denial that he knew the extent of the protests and crackdown against them.

The judge in the retrial will have the discretion to decide whether to accept the fact-finding committee's report, which must first be sent to the prosecutor's office. The prosecution is tasked with further investigating its findings, and then deciding if it wants to include the report in its case file to the court.

The fact-finding commission was created by Mubarak's successor, Mohammed Morsi, who made a campaign promise to bring former officials to justice.

Morsi's Muslim Brotherhood supporters, though, have spoken out in support of so-called reconciliation talks with former officials, many of whom have been acquitted and released from prison in recent months.

Additionally, nearly 100 police officers have faced trial over the killing of protests during the revolt. All except two were acquitted.

Mubarak is the first Arab president to be tried and serve a prison sentence.