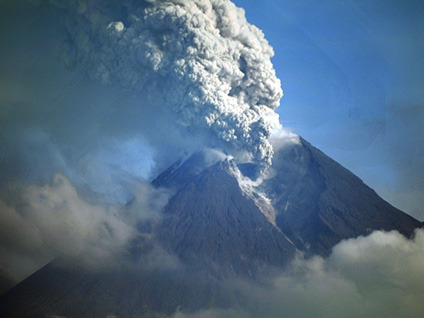 JAKARTA, Indonesia -- The White House could borrow the lyrics from Jimmy Buffett's song "Volcano" as the theme music for the latest stop on President Obama's Asia tour:

"I don't know where I'm a gonna go when the volcano blow."

As Indonesia's Mount Merapi continued to erupt, officials decided Air Force One could land in Jakarta as scheduled. Experts who studied the ash plume and wind currents recommended an earlier than planned departure. The trip was cut short by two hours as officials sought a take off window that would be clear of atmospheric ash.

Spokesman Robert Gibbs told reporters the president's advisers considered "a series of different scenarios" before making the decision. Gibbs said the final call was based on "modeling for the volcanic ash." For all the protective devices on the big presidential airliner, nothing can guard against the impact of ash spewed miles into the air by a volcano.

Jonathan Lees, Professor of Seismology and Volcanology at the University of North Carolina describes the material as extremely dangerous to aircraft. Lees told CBS Radio News, "I think all aircraft are vulnerable. Of course it depends on the density of the ash that the plane is flying through. So if the ash is very dense, I don't think any jet engines can survive that."

Lees offered a vivid description of the impact of volcanic material on massive jet engines. "The ash is basically silica, and when this ash goes into jet engines it basically turns into glass. You can imagine a glob of glass in a jet engine. It'll just shut those down."

The decision to change the president's schedule also affected presidential support aircraft and the civilian airliner chartered by news organizations. Reporters, except for the tight pool that always travels with the president, departed Jakarta for South Korea hours before the president was scheduled to leave.

While Jimmy Buffett didn't know where he was "gonna go when the volcano go," President Obama of course has a set schedule. His next stop is Seoul.