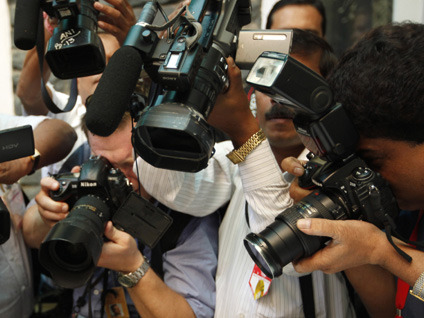 Media coverage of President Obama's visit to India is beyond intense.

More than 200 news channels in 26 languages are providing wall-to-wall coverage of the president's three days here. The news operations have a huge audience. Nearly 1.2 billion people live in a country that is about one-third the geographic size of the U.S.

One questioner was curious about the impact of the U.S. midterm election. "It seems that the American people have asked for a change," observed one politically astute young man in the audience.

The president agreed and predicted he would, "make some midcourse corrections and adjustments."

Obama on the Political Price of the Election Obama: The Full "60 Minutes" Interview

Another student asked about the hot button issue in India: "Why is Pakistan so important an ally to America?"

Amid murmurs in the audience, the president said it was okay, that he fully expected the question. Mr. Obama said the Pakistani government knows that dangerous elements operate within its borders. He described the strategic importance of Pakistan to the U.S. and the region.

"We will work with the Pakistani government in order to eradicate this extremism that we consider a cancer within the country that can potentially engulf the country," said Mr. Obama.

The exchanges unfolded live on Indian television. Amazed Indians noted their leaders would never submit to a free form give-and-take with the public — let alone permit live coverage of that kind of dialogue.

Imitating their U.S. counterparts, the channels breathlessly labeled everything as "THIS JUST IN" and "BREAKING NEWS," even developments that took place two days ago. Channel surfing becomes an exercise in "all Obama all the time." The coverage can is ubiquitous, with TVs mounted over urinals in a hotel men's room providing live pictures of the President of the United States.

Almost every presidential appearance creates frenzy. When U.S. and Indian reporters joined in opposing an Indian government media handler's call for just one question per correspondent at a news conference, Mr. Obama joked, "It looks like the Indian and American press are collaborating -- that's not the kind of partnership we're looking for."

Earlier in the day, there was a less cordial scene when White House Press Secretary Robert Gibbs tangled with an Indian counterpart who was trying to limit coverage of Prime Minister Singh's meeting with President Obama. CBS News producer Jeff Goldman, the pool representative at the event, reported Gibbs threatened to move the president out of photo opportunities if the Indians prevented agreed-to coverage.

Gibbs bluntly told the Indian official, "All of these guys are going in. That's the new agreement." The Indians finally relented and allowed the U.S. side in for a quick "photo-op."

There is also a special fascination in India with the First Lady. The Indian media were enthralled by scenes of Michelle Obama dancing with school children and delivering an impassioned speech about her childhood.

Indian journalist Sanjay Jha said coverage of Mrs. Obama is a sharp contrast to the way the spouses of Indian politicians and leaders are portrayed.

"Family life of Indian leaders is not exposed. Their wives do not have their own grand standing," said Jha.

The coverage does not stop with the Obamas. One network even assigned a reporter to chronicle White House reporters. The correspondent traveled on the White House media air charter from Washington to Mumbai and New Delhi.