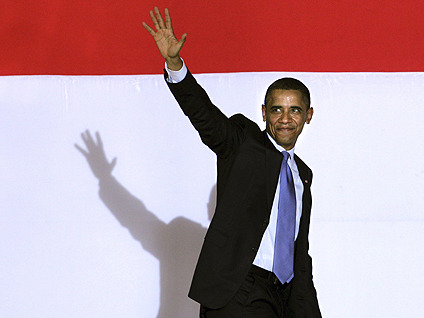 JAKARTA, Indonesia -- President Obama finally made it home -- sort of. After two cancelled trips earlier in the year, the president of the United States landed in Jakarta, Indonesia earlier today - where he moved with his mother and Indonesian stepfather at age 6, and where he lived until he was 10 years old, from 1967 to 1971.

"Obviously, much has been made of the fact that this marks my return to where I lived as a young boy. I will tell you, though, that I barely recognized it," he said a press conference here. "Although I have to tell you that when you visit a place that you spent time in as a child, as president it's a little disorienting," he added.

While he said the city has changed dramatically since he was here a child (the last time he was here was in 1992 when he was researching his bestselling book, "Dreams of My Father"), many of his classmates from the two schools he attended here are still in Jakarta.

In interviews with CBS News, they paint the picture of a young American boy, trying to fit in, but still seen as an outsider.

"He dressed with like Bermuda pants and always wore polo with stripes, or t-shirt with stripes. You can see that he's somebody from outside Indonesia," said Rully Dasaad, one of his classmates. Mr. Obama was remembered as being an alert student who liked to read comic books. He was also shy because of his accent.

"Normally, he didn't like to go to the podium to sing, he was a little bit shy. Maybe because his pronunciation at the beginnings not really, with an American accent, and most of us laugh at him" he said.

Effendi (his only name) taught the young Barry Sotero, as he was known then, in the 3rd grade at the Besuki school here.

"It is still fresh in my memories that Barry's physical appearance was bigger than others, he was fat and his skin was a bit darker. His hair was curly," he said. Both classmates and former teachers recalled the young Barry as someone who was easy going and good at making friends.

"His attitude towards his friends was good both to the boys and the girls, but he was a bit mischievous, especially to the girls" he said. "He liked to, you know in the past there was a student who had a long hair, he often pulled her hair... that was probably to get attention from his friends."

Effendi remembers Mr. Obama as good student who liked history and geography, as well as being involved in school activities. "He also liked to join an extracurricular activity called PRAMUKA (boy scout) that was held on every Saturday afternoon."

When he arrived in Indonesia at age 6, he first enrolled the St. Francis of Assisi Catholics School. The headmaster at the school showed CBS News the documents - that "Muslim" was filled in under "religion" in his enrollment papers. School officials say it was standard practice to give the religion of a students father, and young Barry's stepfather was a Muslim .

But it has led some to suggest, erroneously, that the president is a Muslim, even though he's been a practicing Christian for decades.

Israella Pareira, Mr. Obama's teacher in the 1st grade at Assisi, said she remembered him for good penmanship as a lefty and an unusual way he communicated without yet speaking Indonesian.

"He wasn't able to speak Indonesian language when he first entered this school, so he used sign language in communicating with his friends. While with the teacher, whenever he was facing any matter in the subject that he didn't understand, he would always look at me, which meant he was asking me to help him, so I would explain it to him again in English," she said.

Pariera said that the young president showed classroom leadership and even wrote a paper that foreshadowed his future.

"Since the very beginning, because we have seen his character, especially with the story he wrote on 'I Want to Become a President' we're sure he would have come to this accomplishment."

If that's true, maybe that fire of political ambition was burning in his belly a lot earlier than he's ever admitted.