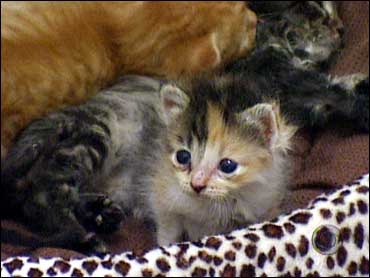 Sunday is Mother's Day, so CBS News correspondent Steve Hartman has a nominee for Mother of the Year. It's this week's Assignment America.

You can understand why some visitors to the Burlington, Iowa, humane society get a little freaked out. It's not everyday you see a dog have a kitten for lunch.

"Grab him! Grab the little kitty!" one delighted child shouted.

And not just a kitten - one dog Hartman visited was about to have a whole litter of kittens for lunch.

"Uh, oh," the child muttered as the dog nabbed the kitty.

The story of this unusual dining arrangement began a couple months ago. Lily, a mix of Labrador and who knows what, was found along an old farm road. She was pregnant and soon had six puppies who all got adopted.

And everything was fine, until the kittens showed up ... without a mother.

"And we didn't know what to do," says Teresa Kurth, who works for the shelter and helped come up with the solution. "I mean it takes a lot of effort to bottle-feed all these kitties."

"You know there's a big difference between a dog and a cat," Kurth says.

"Tell me about it," Hartman joked.

Try and see if Lily would have the kittens for lunch. Which, she did - breakfast and dinner too.

"To see this dog just take to these baby kitties, instantly, I just think Lily is one of a kind," Kurth says.

Yes, and no. There was also the cat that heard an abandoned fawn crying for food and took in the baby deer.

Or how about the baby horse raised by a goat? The lioness who lay down with the antelope?

And perhaps most amazing of all, the leopard - who, in killing a baboon, unwittingly created an orphan. The leopard could have easily made the baby an appetizer, but instead, set down beside and mothered it.

From a strictly evolutionary standpoint, there's no logic to this.

If all that mattered was survival of the species, why would an animal show such grace?

Why would Lily, when one the kittens fell into her water dish, rescue the little trouble-maker and carry him off to safety?

Why? Other than the obvious.

Indeed, for most mothers, it's just what they do. An instinct so deeply wired into them - that often all they know is to love and care for life.

Understanding it completely will take scientists many more years - but feel free to appreciate it this weekend.