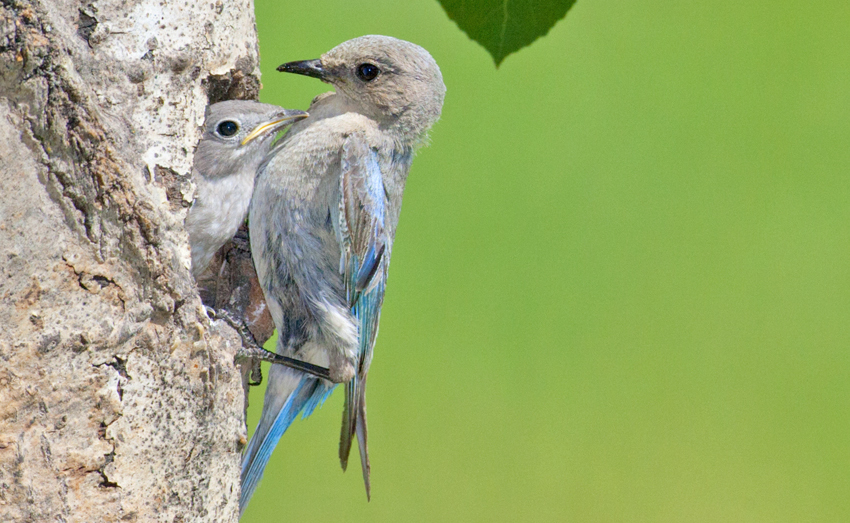 If you are a western bluebird trying to expand your range in the rough-and-tumble forests of Montana, it helps to be an aggressive male.

And if you want to have an aggressive male, it helps to pump a little extra male hormones into your eggs.

That's what researchers realized mother western bluebirds in crowded areas were doing to give their offspring an edge over rival mountain bluebirds. In a study published Thursday in Science, University of Arizona's Renee Duckworth and her colleagues found that an early boost of androgens gave rise to more aggressive males, who were inclined to spread their wings beyond existing communities in the northwestern United States, helping their species overcome competition for habitat.

Duckworth said the findings are the latest example of mothers going above and beyond to give their offspring an edge. Similar results have been found in house finches, rodents and even humans.

"There is a huge body of research showing that mothers can transmit information about the environment to their developing offspring and that this can influence offspring behavior," she told CBS News. "In humans, we know this occurs in response to stressful situations - research has shown that women that are pregnant during a variety of stressful situations, from famines to terrorist attacks, influence the behavior of their offspring via hormones transmitted to the fetus."

Duckworth began studying the two species of bluebirds after fires had devastated parts of the Northwest 15 years ago. With the blazes creating new areas to colonize, she found that the mountain bluebirds often arrived first in newly available pine trees but were soon displaced by the more aggressive western bluebirds.

To understand the roots of this aggressive behavior, Duckworth and her colleagues zeroed in on the mothers.

They first looked at the birth order of baby birds and found that, in populations where there was high competition for nest sites, more aggressive sons tended to be born earlier than nonaggressive sons. To simulate natural competition, the researchers then manipulated the numbers of nest sites and found that mother birds in "stressful" environments - that is, where it was more difficult to find a place to build a home - "transmit[ted] hormones through the egg to their developing chicks."

"This has a long-term influence on their behavior," Duckworth said. "Thus, our study shows that these types of 'maternal effects' are ubiquitous in nature and can be adaptive in that they 'prepare' offspring for the environment they will experience after birth."

Writing in an article that accompanied the Science study, University of Michigan's Ben Dantzer noted that the aggression was part of an intriguing cycle.

Dantzer said the study illustrated how maternal effects can indeed have important ecological consequences in the wild.

And Duckworth stressed that the significance does not end there. "Our results are absolutely relevant to other species, including humans," she said.