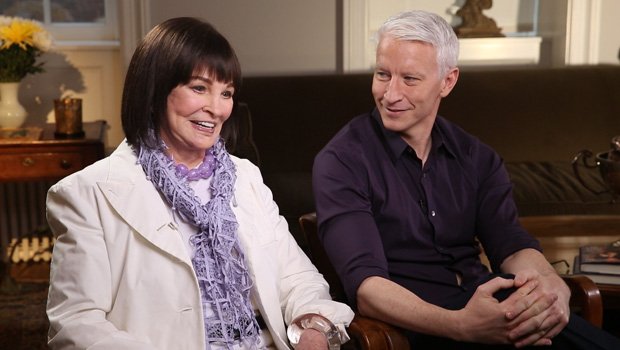 When a mother and son trade confidences, it doesn't necessarily attract the attention of the outside world. Unless the mother is Gloria Vanderbilt, and her son is Anderson Cooper. They've been sharing their family album with Rita Braver:

She was born into one of America's wealthiest families, and from the beginning the world was fascinated by the trials, travails and adventures of glamorous Gloria Vanderbilt ... her sensationalized childhood ... her careers as an actress, artist and jeans designer.

"Did you always have a sense that the whole world seemed to be watching everything you did?" Braver asked.

"Never," Vanderbilt replied. "I still don't. I really do never read anything about myself. I do look at the picture, though, 'cause I'm very vain I guess! 'Vanity of vanities, all is vanity!'"

Her son, 48-year-old CNN anchor and "60 Minutes" correspondent Anderson Cooper said, "I just think the public perception of her is very different than the person I actually knew. She's 92 now, she's been making headlines from the time she was born. And I kind of wanted to reveal the person that I know, and the person that she really is."

But Cooper realized there were many things that neither of them actually knew about the other.

"We decided, on her 91st birthday, to change the conversation that we have and the way we talk to each other," he said.

According to Vanderbilt, it was all done by email.

"I think we're both at a place where both of us didn't want to leave anything unsaid," Cooper added.

Now those emails are being released in a new book, "The Rainbow Comes and Goes: A Mother and Son on Life, Love, and Loss" (HarperCollins), along with an HBO documentary, "Nothing Left Unsaid," which debuts this coming Saturday. Both explore the loving and occasionally bickering relationship between mother and son.

"No, it was just that Thanksgiving," he said. "One of the ways that we're different is that, my mom is incredibly creative, but she's not a planner. I plan everything, so I have this deep worry line 'cause at night I sit there churning when I can't sleep."

"And I plan one moment to the next," admitted Vanderbilt.

"Which drives me bananas."

It's been a revealing experience for both of them.

Braver said, "Some of this was precipitated by the fact that you've been going through your mom's stuff, and you have a lot of questions about why she kept certain things and what things meant?"

"I'd find letters from Howard Hughes to my mom, or Leopold Stokowski, the famous conductor who my mom was married to, and I started asking her about it."

Why did Vanderbilt save those things? "I believe everybody should, because it gives you a frame of reference. And it gives me a sense of knowing who I was then, who I became, who I am now. It gives one a sense of time, and a sense of one's own history, so to speak."

And what a history! Her father, Reginald Vanderbilt, whose family forged a shipping and railroad empire, died in 1925, when Gloria was just a toddler. At ten, she was dubbed "The Poor Little Rich Girl," when her aunt fought her mother for custody, and WON -- in part, because it was alleged that Gloria's mother had been in a lesbian relationship.

"I had never heard the word 'lesbian,'" Vanderbilt said. "I didn't know what it meant. And I became terrified that I would, too, become like that, because it was then considered something that was a sin and a crime and something that was very terrible, you know?"

Cooper had his own secrets, holding off on telling his mother that he was gay until he was out of college.

"Yeah, I mean, I came out in high school to my friends," Cooper said. "And part of if it, in the back of my mind, was that I had heard that my grandmother had been accused of being a lesbian. And I'd known that as a child it had affected my mom. But I also knew that deep down my mom would be fine with it, because she had gay friends who were always in our house growing up."

Indeed, it WAS fine. And in the spirit of "nothing should be left unsaid," in this exchange in the book the two even delve into that most PRIVATE of personal experiences:

"Perhaps the only thing more embarrassing than hearing about your sex life was discovering it was more interesting than my own," Cooper said to Vanderbilt in one of the book's passages.

"Well, I do think it's important have a sense of humor about sex," she replied. "Sometimes unable to sleep, I count lovers instead of sheep."

And there were plenty, including Frank Sinatra. But it was Wyatt Cooper, Vanderbilt's fourth and last husband -- and father of Anderson and his brother, Carter -- whom Vanderbilt considers the love of her life. He was a writer, editor and former actor. They met at a dinner party:

"And I just knew we were going to be very important to each other," she said.

But the Cooper family was shattered when Wyatt died of heart disease in 1978 at age 50.

"For me, it certainly changed who I was," Anderson said. "I think the person I was before was a lot more interesting and outgoing. I became probably much more introverted, and very concerned about what catastrophe was going to happen next. And it made me much more of an adult."

The most dramatic scenes in the documentary come during a visit to the graves of Wyatt and Carter Cooper, Gloria's son and Anderson's older brother, who died in 1988 by jumping from a balcony, while his mother pleaded with him not to do it.

"I love to talk about him," she said. "It brings him alive, it brings him close. It helps me sort of share how I felt about him, feel about him."

And Gloria Vanderbilt and Anderson Cooper say they made a deliberate decision to share these surprisingly intimate moments with the whole world.

"If I'm asking people to tell me their story, I feel like I should tell part of my story," he said, "and to the extent that it encourages other people to change the relationship they have, particularly with an aging parent, I think then, why not?"

Braver said to Vanderbilt, "You made no bones in either the documentary or the [book] about the fact that you realize you're coming to the final stages of your life."

"Meaning what? What's going through your mind now at this time of your life?"

"Well, I think something wonderful is going to happen -- maybe tomorrow? And I like to think maybe sooner!"

Anderson added, "Yeah, my mom is the most sort of youthful and optimistic person I know. She still believes there's like a guy waiting on a boat in the south of France ..."

"A yacht! For her, or just around the corner there's gonna be some incredible new experience, and she makes me believe it as well."