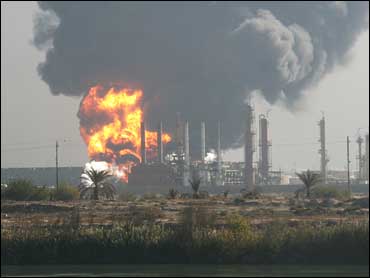 Iraq's foreign minister, meanwhile, said a new security pact with the United States would set a time limit on the American troop presence. The government's eventual goal was "to reach a level of preparedness that leaves us with absolutely no need for foreign forces to remain in the country," he said.

The mortar rounds hit a prison made up of several cell blocks, each containing prisoners accused of terrorism-related crimes or civil offenses, police said.

Police said American troops sealed off the area and were investigating the bombardment, which took place about 6:30 a.m. The U.S. military said it had no immediate information, and Iraqi Interior Ministry officials could not be reached for comment.

A hospital official said the inmates were still asleep when the mortars hit, one landing directly on a cell and two others nearby.

In Baghdad's Dora neighborhood, an oil refinery went up in flames Monday morning, but U.S. military officials said the blaze was not the result of enemy action, as initially reported. The military initially blamed the fire on a rocket or mortar attack.

The military said the fire was the result of an "industrial accident".

Assim Jihad, a spokesman for Iraq's Oil Ministry, said no casualties were reported and the plant was still operating.

"The fire is under control and within a few hours it will be extinguished. This will not affect production," Assim told The Associated Press. A police official said earlier the fire was caused by a 120 mm mortar round.

The police and hospital officials spoke on condition of anonymity because they were not authorized to release details of the incidents.

Iraq's oil industry has come under repeated attack since the war began, including on Friday when a bomb exploded beneath a key pipeline outside the northern city of Beiji, home to the country's largest refinery.

According to Oil Ministry figures from July, the industry suffered 159 attacks in 2006 by insurgents and saboteurs, killing and wounding dozens of employees and reducing exports by some 400,000 barrels a day. Such attacks have cost Iraq billions of dollars since the 2003 U.S. invasion.

"We left an underline that the Iraqi government hoped that this would be the last extension of the mandate," he said, adding the negotiations for a new pact with the Americans would be "the most important that Iraq has ever entered."

He said the deadline for reaching an agreement was July: "There will be negotiations about the conduct of these (U.S.) troops and their rights, privileges and also questions of command and control."

Zebari also said U.S. and Iranian experts would meet Dec. 18 to discuss security issues ahead of an expected round of formal talks on Iraq's stability. He said both sides agreed to a fourth round of ambassador-level talks in Baghdad, but the timing was under discussion.

Zebari's comments came a day after Iraq's national security adviser, Mouwaffak al-Rubaie, warned Washington that a strategy of aligning its Sunni Gulf allies against Iran would only exacerbate tensions in the region.

"The United States, until they seriously engage with Iran ... the long-term regional security will be in doubt," al-Rubaie said on Sunday, the final day of a regional security summit in the Bahraini capital, Manama.