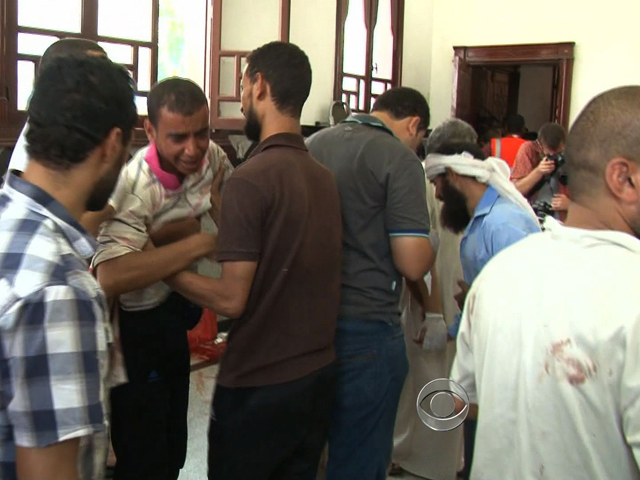 (CBS News) CAIRO - There has been a deadly escalation in violence in Egypt. On Saturday, U.S. Secretary of State John Kerry said the country is at a "pivotal moment." At least 72 people are dead there, according to the Ministry of Health, after troops opened fire on supporters of deposed President Mohammed Morsi. There are conflicting claims about exactly what happened. The government says troops only fired tear gas, not live bullets.

The clashes began in the very early morning and lasted for hours. Amateur video shot by the protestors appeared to show Egyptian police and men in plain clothes firing shot guns and hurling rocks at the demonstrators.

Morsi supporter Abdul Rahman told us he saw the army and police firing much more lethal AK-47s directly at the crowds.

"There was really heavy fire," said Rahman, "and when they're not firing, the thugs come with their pistols and their stones and they're stoning the people."

Egyptian security forces claimed they only fired tear gas. But when we visited the field hospital where protestors took their dead and wounded, we found a very different story.

We've counted 37 dead bodies in a room alone. Doctors told us that almost all of them have bullet wounds to the head, neck and heart.

Dr. Jaber al Mursi told us that the clinic was overwhelmed. "We close our hospital because we haven't any supplies, any medical supplies to support these injured people or dead people."

As word of the killings spread, people tried to fight their way into the improvised morgue, hoping they wouldn't find their loved ones there.

But throughout the morning, many had to face a terrible truth. Volunteers, overwhelmed by the sheer number of the dead could only allow the relatives a moment to grieve.

We asked who was responsible. "The military and police," Mohammed told us. "He had no gun, just his Koran."

One by one, the dead were carried out as the crowds cried, "oh shame, my brother is shooting his brother dead."

Egyptian police have released a video that appears to show at least one Morsi supporter firing some type of makeshift weapon at the police, though there were no fatalities among the security forces. And the fear Saturday night for these Morsi supporters is that an even tougher military crackdown may be on the way.