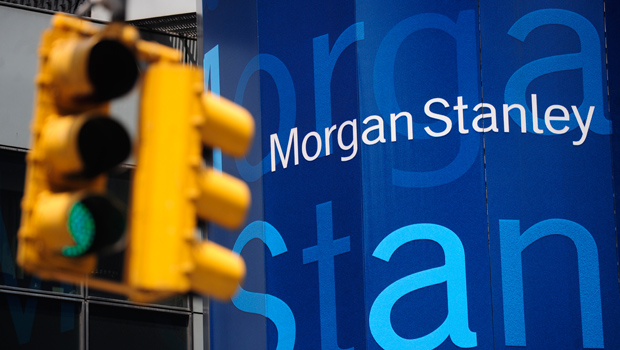 NEW YORK Morgan Stanley (MS) reported higher revenue and net income for its third quarter Thursday thanks to gains in its bonds and asset management businesses.

Excluding an accounting charge, the bank earned $535 million for common shareholders in July to September, up from $39 million a year ago.

Revenue rose 18 percent to $7.6 billion after excluding the charge. That beat the $6.4 billion that analysts were expecting, according to FactSet.

In a statement, CEO James Gorman said the results showed the bank's "balanced, strategically focused" game plan. He said he was "confident in our potential to enhance profitability and increase value for our shareholders in the quarters ahead."

If the accounting charge is included, the bank lost $1 billion in the quarter versus income of $2.2 billion in the same period a year ago, and revenue fell 46 percent to $5.3 billion.

The charge was related to a controversial accounting rule that governs how banks value their debt. When the value of a bank's debt rises, it has to take a write-down because, theoretically, it would have to pay more to buy back its debt on the open market. The rule has been criticized as confusing, because it penalizes banks when their value to investors is actually rising. The rule could be phased out as early as next year.

Gorman has been moving the bank into more consumer-focused activities, notably with its expansion of the Morgan Stanley Smith Barney retail brokerage. In a call with analysts, Gorman said the bank was positioned well "for the future and the new regulatory landscape."

Revenue rose in most areas where the bank does business. It tripled in the asset management unit, which helps sophisticated clients - mostly institutions - invest in private equity, real estate and other investments. The bank noted gains in real estate investing, and said that clients were putting more money into some of its funds.

The investment bank also helps businesses raise money on the open market, go public, and make decisions about strategy. Morgan Stanley did less business in advising companies. It also brought in less money from underwriting stock offerings. But it more than doubled its revenue from underwriting bonds.

Gorman said clients have "re-engaged" with Morgan Stanley after "the uncertainty" in June, when ratings agency Moody's had knocked down its rating of the bank.

Wrote Credit Suisse (CS) analyst Howard Chen: "From what we can tell, there has been limited lasting damage from the Moody's action."

Citi agreed to sell the rest of its stake to Morgan Stanley, but it got far less money than it wanted. As a result Citi had to take a $4.7 billion write-down when it announced its own third-quarter earnings on Monday.

Morgan Stanley wants to expand its retail brokerage arm which, while not as glamorous as higher-risk businesses, does provide a steady source of revenue.

The bank makes money there largely through charging fees when it helps customers manage their money. Riskier bank activities, like trading for its own account, can offer the opportunity for bigger profits. But that type of trading is being stamped out by new regulations. It also carries the risk that banks can miscalculate and suffer huge losses.

Gorman said in a statement that the bank is "beginning to unlock the full potential" of the retail brokerage business.

Morgan Stanley has also been slashing jobs and expenses to cushion itself against the uncertain economy. It shed about 4,500 jobs over the year, or about 7 percent of its work force. It spent more on paying its employees, though. Compensation and benefits expense rose 8 percent to $3.9 billion.