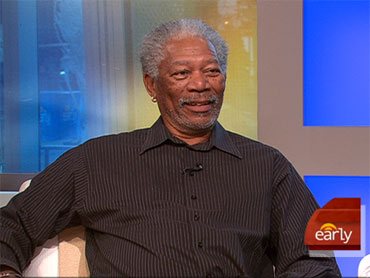 This is already looking a good year for actor Morgan Freeman.

He's considered an Oscar front-runner who already has a Golden Globe nomination for the film "Invictus." In addition, he's a brand new member of the CBS News family.

Freeman says he was thrilled to get a phone call from CBS News Creative Director Bob Peterson, asking him to lend his iconic voice to the

Freeman's voice has a life of its own. Whether it be a movie narration, news intro or acting as God or the President of the United States or of South Africa, Freeman has the vocal chops and skills to pull off just about any role.

"In this pantheon of greatness, where does Nelson Mandela fit?" Smith asked.

Freeman, who plays Mandela in "Invictus," met him "years ago, when he published his book, 'Long Walk to Freedom,'" Freeman said. "I've told this story over and over. He was asked if the book became a movie, who would you ever want to play? So he anointed me."

To be asked to play Mandela was such an honor for Freeman that he didn't want to choose just any old director. So he sent actor/director Clint Eastwood the script to "Invictus" and asked him to direct it.

In the film, Mandela inspires his fellow South Africans with his insight and wisdom.

For a country already in turmoil after overcoming apartheid, Mandela hopes to reunite his country through sports. He chooses South Africa's rugby team, the Spring Box, to reach that goal.

Although the odds are against him, with every black South African despising the predominantly white rugby team, Mandela manages to get through to them.

"I know all of the things they deny us, but this is no time to celebrate petty revenge. This is the time to build our nation. You elected me your leader. Let me lead you now," Freeman said in the film, as Mandela.

With such captivating lines, what does Freeman think of when he's delivering them?

"Nothing," Freeman replied. "To be very honest, it all works the same way. If you have some idea of who you're playing, and I had a really good idea of who I was playing in this one, it just comes together. You don't have to -- I don't belabor it, in other words. 'How should I go about this, say it this way or say it that way?' It just comes out."