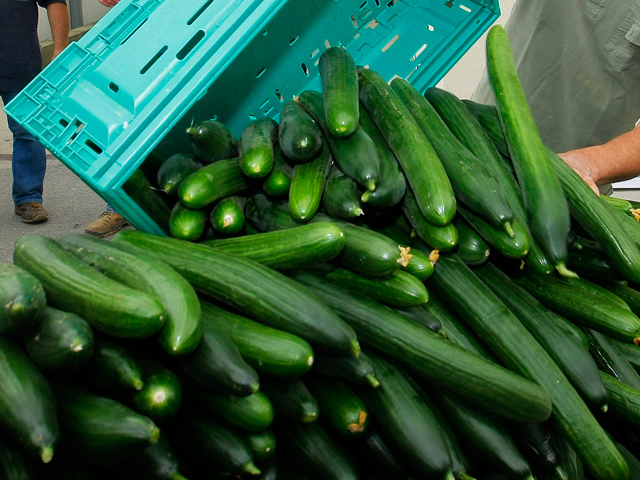 A salmonella outbreak traced to contaminated cucumbers imported from Mexico continues to grow.

The U.S. Centers for Disease Control and Prevention says 418 cases of illness have now been reported in 31 states. That's an increase of 77 cases in the past week. The CDC says 91 people have been hospitalized since the outbreak began in July.

More than half of those sickened have been children under the age of 18.

Two deaths have been linked to the outbreak: a 99-year-old woman in California and a woman in Texas who suffered from other serious health problems, officials said.

Testing traced the likely source of the outbreak to fresh cucumbers imported from Mexico and distributed by Andrew & Williamson Fresh Produce, officials said. A voluntary recall of "Limited Edition" brand cucumbers was announced Sept. 4, and last week the recall was expanded to include "Fat Boy" brand cucumbers from Custom Produce Sales.

Andrews & Williamson says it is fully cooperating with health officials. "We are currently conducting a thorough evaluation of our cucumber farming and packing operations to determine if we can find the root cause of how this might have happened," the company said in a statement. "The health and welfare of consumers is our highest priority."

Health officials say the affected produce is unlikely to have any identifying labels, so consumers can either ask the store about the source of cucumbers or just get rid of them to be safe. "When in doubt, throw it out," San Diego County public health officer Dr. Wilma Wooten told CBS affiliate KFMB. "Anyone with salmonella symptoms such as nausea, diarrhea, fever and abdominal cramping should seek medical attention."

Salmonella is one of the most common causes of food poisoning, sickening more than a million people in the U.S. each year. The CDC says symptoms typically develop within 12 to 72 hours after eating food tainted with the bacteria and last about 4 to 7 days.

"Most people recover without treatment, though there are some severe illnesses that do require hospitalization," Dr. Laura Gieraltowski, an epidemiologist with the CDC, told CBS News.

Young children, the elderly, and people with weakened immune systems are more likely to suffer complications. "Some people have more severe illness where the bacteria travels into the bloodstream from the intestine where they may require antibiotic treatment and hospitalization," Gieraltowski said.