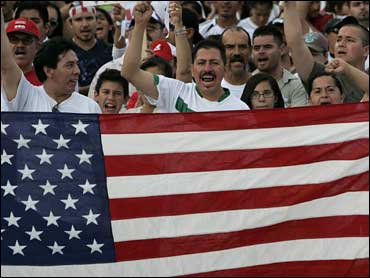 The first step toward citizenship, obtaining a green card, will soon surge to more than $1,000, a price tag certain to be a hardship for many immigrant families.

A laborer earning the minimum wage of $5.15 an hour would have to save every penny earned for five weeks to pay for the card, which is issued to permanent legal residents. Immigrants to the United States must hold this status for five years before they can become naturalized citizens.

The new prices, which do not require congressional approval, take effect July 30.

Advocacy groups and some immigrants say the increases are too drastic. The cost of a green card is only a portion of the expenses borne by immigrants seeking citizenship or other benefits.

"They are taking advantage of the fact that people will pay anything to become a citizen," said Unyoung Lee, 24, of Northbrook, Ill., who is trying to file her citizenship application before the prices go up.

Lee came to the United States with her parents and brother in 1992. Because of the high cost, her family took turns applying for naturalization. Lee's mother went first, then her brother. Her father was to go next, but with the fee increases they decided Lee should apply instead.

A college graduate earning about $26,000 a year, Lee works at the Korean American Resource and Cultural Center, where she helps other immigrants navigate the citizenship process. She also is paying off student loans and helps her parents, with whom she lives.

"I just saved up enough money and I'm going to apply next week," Lee said. "Dad is going to have to wait for the fee increase."

Under the current fee structure, the cost for all four family members to naturalize was $1,600. Under the new structure, Lee's father would pay $595, plus the $80 for electronic fingerprints.

There is also a renewal fee.

Immigrants also must pay to get necessary documents from their home countries or local courthouses, and to get that paperwork translated and notarized.

Democrats in Congress have criticized the fee hikes. Sen. Barack Obama, D-Ill., and Rep. Luis Gutierrez, D-Ill., introduced legislation seeking to ease the increases by having Congress allocate money to the federal agency.

Emilio Gonzalez, Citizenship and Immigration Services director, said the fee increases were needed instead "because we need the money" and the fees allow flexibility in adjusting to the application workload. "To do nothing is to invite organizational disaster because we are just not covering the cost of doing business," he said.

The agency expects the increases in green card and other fees to generate an extra $1.1 billion annually, raising its overall fee collection to about $2.35 billion a year. The money would be used to hire and train 1,500 employees, to pay for new or renovated offices and to streamline application processes for legal permanent residency, naturalization, immigrant worker petitions and green card renewals.

Jay Marks, an immigration attorney in Silver Spring, Md., said one of his clients, a legal permanent resident seeking citizenship, wants to bring his wife and four children from Mexico.

To do so, the client, whom Marks declined to identify, must file petitions that are going up in price from $190 to $355. Marks said he advised his client to file two sets of petitions, plus the citizenship application, before the fee hikes kick in.

It is unfair, Marks said, for the immigration agency to put its administrative costs "on the backs of folks who are already paying taxes in order to get these benefits, many of them working two jobs."

Immigration officials set a $600 fee for green cards for children under 14 who apply with a parent. They pay $225 now.

Aman Kapoor, founder of the advocacy group Immigration Voice, said he and his wife have been waiting for green cards for three and a half years, and have been fingerprinted five times. Each fingerprinting cost them $70 each.

Kapoor figures they spend $700 to $800 for each trip from Tallahassee, Fla., to Jacksonville, Fla., to handle their immigration affairs. He questions the multiple fingerprinting, since his prints haven't changed.

He earns $100,000 a year, and his wife also works, so Kapoor says the fees aren't as painful for them. But, he asks, "Why should anybody have to pay this cost?"