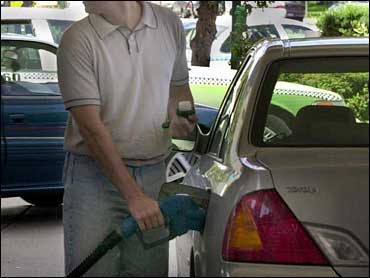 Warning for drivers: Be careful at the pump.

Some experts say the number of fires being sparked at gas stations is on the rise, and you could be in harm's way.

On Monday's The Early Show consumer correspondent Susan Koeppen reports on how these fires start and what you can do to stay safe.

At gas stations all over the country, unsuspecting drivers are becoming victims of static fires.

At a gas station near Tulsa, Okla., a woman lost her life while pumping gas. Static electricity sparked a blaze that went out of control.

It happened to Ignacio Sierra while he was pumping gas at a station just outside Spartanburg, S.C.

"I thought it was a nightmare," he says.

Sierra grabbed the nozzle and felt a shock.

"When I touched it, the spark made the fumes blow and the whole car was like a flame, a whole flame," he recalls.

His 4-year-old daughter, Esperanza, was buckled up inside his truck that was on fire.

"I just tried to think," Sierra says, "'Get my daughter out of the car and run for safety.'"

Sierra and his daughter escaped without harm, but his truck and a portion of the gas station were destroyed.

Fowler says static fires are a growing problem, and not enough is being done to warn the public. Most of these fires are caused by drivers who get back into their cars while the gas is still pumping. By getting into their seats, they are building up static electricity.

Just like rubbing your feet on the carpet and touching a door knob, the same thing can happen in a car.

"It's the same thing," Fowler says, "You're rubbing your clothes on the seat, and you can see there's a lot of rubbing going on, and as you stand, you are giving yourself a high voltage potential."

That static can turn dangerous when you go back to the nozzle. As vapors come out, just touching the nozzle can spark a fire.

A total of 78 percent of these fires happen to women. Why? Because they tend to get back into their cars more often than men. They look in the mirror to check their makeup, grab a purse on the floor, check on the kids in the back, or they get inside to stay warm during the winter months.

A video recording shows a perfect example of static electricity at work: A woman gets back into her car with the gas dispenser running. When she gets out of her car, and reaches for the nozzle, there's a blast of fire. Then she tries to put the fire out - grabbing the nozzle - and pulling it from the car. Something Fowler says that's something you should never do.

"The main thing to do is get away," Fowler says. "If you have people in the car, get them out. Leave (the nozzle) alone. Do not touch that and do not pull it out."

A demonstration video shows what can happen if you pull out the nozzle after sparking a fire: Flames spread quickly. The fire (feeding off the fuel) becomes even worse.

To combat the problem, the top nozzle makers in the United States are now putting static fire warnings on all new nozzles and hose attachments.

Spinx gas stations in South Carolina were the first to put up warning pads. They not only warn you of the static danger, but you can touch them to discharge your static, eliminating the risk of sparks at the nozzle.

Eric Baumholser of Spinx notes, "A lot of our decals at this location are dirty, and that's a good thing because people are using them."

If your gas station doesn't have one of these pads, you can simply touch the door of your car to get rid of your static.

Sierra says that's something he learned the hard way. He feels lucky to be alive and believes someone was watching over him that day.

Experts say if you have passengers in your car when you stop for gas, make sure everyone unbuckles their seat belts while you are filling up. If there is a fire, they will be able to escape more quickly. And it will be easier for you to rescue a child.

What Newborns Are Really Thinking

Cooking Oils That Are Good For You

Should You Use Cell Phones At Gas Pumps?
View CBS News In
CBS News App Open
Chrome Safari Continue
Be the first to know
Get browser notifications for breaking news, live events, and exclusive reporting.