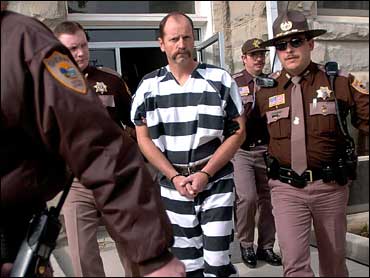 A prison inmate accused of plotting to kidnap David Letterman's young son was on the loose early Monday after he and another man fled the Montana State Prison ranch in a truck.

Officials said the search had concentrated on an area south of the prison where the truck was later found, but no one had reported seeing the two men.

A charge of solicitation to kidnap was dropped in return for guilty pleas to other charges, including felony theft and misdemeanor obstruction. Frank had worked as a painter at Letterman's ranch near Choteau and received a 10-year prison sentence for overcharging him; Frank was on supervised release for a 1998 conviction for stalking and intimidating a woman when he was arrested.

The other inmate, William J. Willcutt, 22, was convicted of burglary.

The two had been assigned to a ranch crew that moves irrigation pipe. A supervisor noticed Willcutt and the truck were missing Friday afternoon, and an inmate count revealed Frank was also gone.

New information indicated the pair "may be armed and have other provisions to sustain themselves," according to a prison news release. Warden Mike Mahoney declined to provide details.

The search, involving a prison dog and people trained in "man tracking," focused on an area where the ranch's 1965 truck was recovered. Mahoney said the site is in the mountains south of Deer Lodge.

Montana authorities declined help from both the New York Police Department and U.S. Department of Homeland Security over the weekend.

Mahoney said the logistics of bringing officers in from the East Coast was too complicated. He said a detective with NYPD's threat-assessment unit had been in touch and "I can only assume it would be in connection with Mr. Letterman." Cloudy weather on Sunday prevented the use of Homeland Security helicopters, he said.