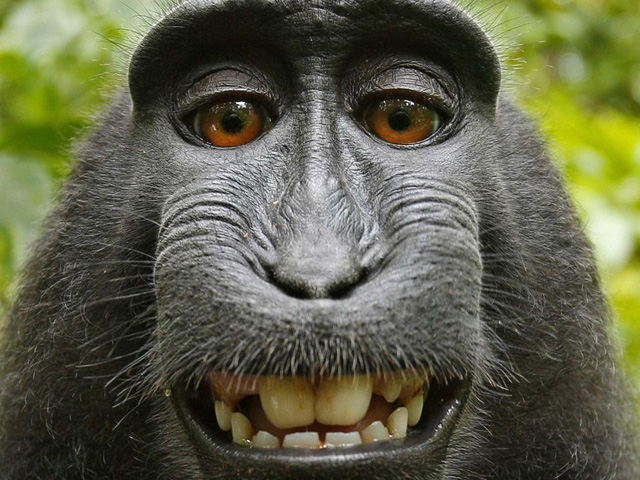 A selfie taken by a wild monkey is at the center of a heated copyright dispute between a photographer and Wikimedia Commons. At heart is the question of whether a photographer who owns the equipment can claim ownership of photos actually taken by an animal.

British wildlife photographer David Slater, whose camera was used by the Indonesian macaque to takes its selfie, has said the copyright question should be decided by a court.

Neither Wikimedia nor Slater responded to requests for comment. However, Andrew Bridges, a partner with law firm Fenwick & West and an expert in copyright law, spoke with CBS MoneyWatch. From his view, the answer is clear: Slater likely isn't the copyright owner because he didn't have sufficient artistic control over the result.

"Copyright requires original creative expression of a work," Bridges said. This is true not only in the U.S., but also in Great Britain and Indonesia. Since Slater didn't have creative control over the monkey and didn't actually frame the images, he legally might not be considered to have been involved in the creative process.

"Let's say that that the monkey had eaten a bunch of bananas and had piled the banana peels on the jungle floor," said Bridges. "If a person takes the peels and puts them into a museum, is he the sculptor? I don't think so."

A quick check of British and Indonesian copyright law also shows both require that the creative entity responsible for the image be one or multiple individuals. The macaque, no matter how rare, is not considered an individual under the law.

The image in question is one of the most popular images on Wikimedia Commons, a cousin site to Wikipedia comprising digital files that are in the public domain. It's a self-portrait of a threatened species of primate: the Celebes, or black crested macaque.

Slater was on the Indonesian island of Sulawesi taking photographs in 2011. A curious macaque approached Slater's cameras and began using them to take a variety of pictures, including one of itself. "They were quite mischievous, jumping all over my equipment and it looked like they were already posing for the camera when one hit the button," Slater told the Telegraph at the time.

It's such a funny picture that it became a viral hit on the Internet and eventually found its way to Wikimedia Commons, where people were free to download it. That displeased Slater, who said Wikimedia was hurting him financially, and he demanded the organization remove the image because he was the copyright owner.

Wikimedia has refused because, it claims, Slater didn't take the image and, therefore, he isn't the copyright owner. The monkey can't hold copyright, Wikimedia argued, so the image should be in the public domain.

According to the Wikimedia attribution, Slater "rotated and cropped" the image, but Bridges said it's unclear whether such manipulation would be enough to establish a copyright interest.

Weddings frequently offer a similar conundrum when the bride and groom leave disposable cameras on tables for the use of the guests. "Let's say the guest takes a picture that is fabulously funny and goes viral," Bridges said. "Does the wedding couple or the guest own the copyright for the picture?" The answer is the guest.

Discussing monkeys and copyright is apparently an old tradition in the context of what's called the infinite monkey theorem. An infinite number of monkeys allowed to randomly hit keys on typewriters would eventually reproduce every previously written work in the world. But Bridges said that it wouldn't be copyright infringement because the monkeys hadn't read the writing in advance, and therefore couldn't copy it.

Of course, it also depends on how good their lawyer is.

Correction: A previous version of this post referred to reports that Wikimedia would hold a vote asking users to decide if the photo should remain online. Wikimedia told CBS MoneyWatch this is not the case.

7 of the deadliest cars on the road