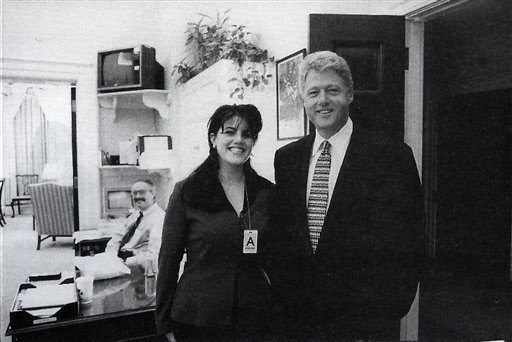 Monica Lewinsky, the former White House intern who is best known for having an affair with then-President Bill Clinton, says it's time to "burn the beret and bury the blue dress."

The reference - which alludes to the outfit Lewinsky had worn during a sexual encounter with the president in 1997 that had a stain containing Clinton's DNA - is one reflection on her relationship with the president that Lewinsky offers in an article she authored for the June issue of Vanity Fair.

Lewinsky, who is now 40, writes that she "deeply" regrets the affair. But breaking 10 years of silence on the matter, she writes that it was consensual.

"Sure, my boss took advantage of me, but I will always remain firm on this point: it was a consensual relationship. Any 'abuse' came in the aftermath, when I was made a scapegoat in order to protect his powerful position," she writes, according to excerpts published on Vanity Fair's website. "The Clinton administration, the special prosecutor's minions, the political operatives on both sides of the aisle, and the media were able to brand me. And that brand stuck, in part because it was imbued with power."

Lewinsky says she was motivated to tell her story after the suicide of Tyler Clementi, a Rutgers freshman who was secretly recorded having a sexual encounter with another man. Her own reaction to the public scandal surrounding the affair was to have strong suicidal temptations due to the shame and scorn she felt, although she never actually attempted suicide.

Clementi's death motivated her to think about her story in a different light.

"Perhaps by sharing my story, I reasoned, I might be able to help others in their darkest moments of humiliation. The question became: How do I find and give a purpose to my past?" she writes. She say she wants to get involved with "efforts on behalf of victims of online humiliation and harassment," including by speaking in public.

Lewinsky's name has been back in the spotlight as Hillary Clinton considers a bid for the presidency in 2016. An recently-released archive of correspondence, diary entries, memos and notes kept by Diane Blair, one of Hillary Clinton's closest friends, revealed that the former first lady referred to Lewinsky as a "narcissistic loony toon."

Lewinsky responded to Hillary Clinton in the Vanity Fair article, writing, "My first thought ... If that's the worst thing she said, I should be so lucky."

Meanwhile, Sen. Rand Paul, R-Ky., has also pointed to the scandal to rebut the argument that Democrats are stronger on women's issues. He says Bill Clinton's actions at the time were "predatory."

"One of the workplace laws and rules that I think are good is that bosses shouldn't prey on young interns in their office. And I think really the media seems to have given President Clinton a pass on this," Paul said on NBC's "Meet the Press" in January. "He took advantage of a girl that was 20 years old and an intern in his office. There is no excuse for that."