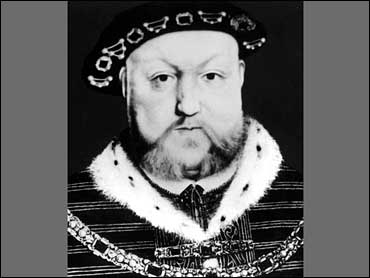 At the start of his reign England's King Henry the 8th was tall and skinny. By the end of his reign he was a right royal roly-poly.

And now we know precisely why.

Because every menu for every meal for every king of England since the sixteenth century is recorded in a daily Bill of Fayre kept at Windsor Castle, just outside London – and at long last everyone can go to see it.

The first Queen Elizabeth wasn't interested in food at all. She picked at her plate like a bird. Charles the Second also had a pretty poor appetite – but this may have been because the public were encouraged to come and watch the king eat. They used to crowd into Windsor Castle's courtyards to gawp at their monarch over dinner. That would be more than enough to put a glutton off his meal.

Queen Victoria was certainly not a glutton – more of a gobbler. In her day no sooner had the chefs cooked it up then it was down the regal gullet – hardly touching the sides as it went. At state banquets she behaved in exactly the same way – chucking down five courses in ten minutes. It didn't seem to bother her, but it was often an impossible struggle for guests to keep up – especially since as soon as Her Majesty polished off one course, the house rule was that everyone else's dishes had to be cleared away too.

One British Prime Minister suffered very badly - William Ewart Gladstone. Mr Gladstone was scrupulous about his digestion. He insisted on chewing each mouthful thirty two times before swallowing. Thus, Queen Victoria had already wolfed down the cheese and biscuits long before Gladstone finished his first spoonful of soup. He always left Windsor famished and fuming.

How do I know? It's all part of a brand new conducted tour around Windsor's royal kitchens - the oldest continuously-used catering establishment in the world! And as for Henry the Eighth's diet, it reads like an early version of the Atkins….. seventy-five per cent meat, plus copious quantities of wine and ale. It may have played havoc with his waistline – but for a king who worked his way through six wives, it didn't do his libido any harm.