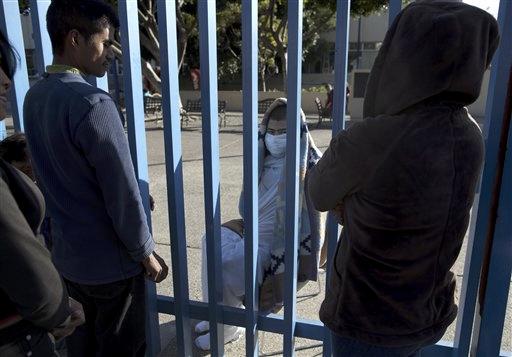 In all the coverage of Michael Jackson, there's one voice that's rarely heard. And that's the voice of Debbie Rowe, the woman whom Jackson married eight years ago and who bore his children.

Not only did Rowe break her silence, she actually invited the "E.T." camera into her multi-million dollar Beverly Hills home. She's reportedly signed a confidentiality agreement that prevents her from talking about Michael and her children. But her emotions surrounding her past still run extremely high.

"My big fear is I can't talk about. And I wouldn't," Rowe says with tears in her eyes, "And my biggest fear is that those fears happen. And I can't stop it."

By marrying Jackson in 1996 and bearing his children, Rowe became a public figure, and by her own admission, Rowe has been profoundly scarred by her brush with celebrity. In stark terms, she described how the paparazzi turned a simple lunch at a Los Angeles hot spot into a nightmare.

"I started to freak out," she says. "People started running across the street; one guy almost got hit by a car. By the time we were finished, there's a 150 people out there. And then, we were chased by cars, which is even scarier. That put me into hiding for three weeks. I didn't leave the house."

It's a house that Jackson found for Rowe, whom he'd met at the dermatologist's office where she was working.

Offering a tour of her house, Rowe says, "This is the living room. The room was quite larger until I brought in a piano. This is the formal dining room."

Nestled in the heart of Beverly Hills, this $2 million mansion is Rowe's hideaway, the sanctuary that protects her from the prying eyes of the paparazzi.

"When we got the place, the privacy issue was huge," Rowe says as she shows off her outdoor patio, "We had someone come over this fence once."

Rowe has been making a whole new life for herself, and part of that new life is a brand new look. The former dermatology nurse has chosen to undergo permanent cosmetic changes.

"I had eyebrows and eyeliner tattooed, so I have, like, make-up," she notes. "How lovely is that?"

She says the new life she has given herself has brought with it a sense of anonymity. What Rowe hopes is that she'll be allowed to keep it.

She says, "Eventually people have to realize I'm not different than the person next door, except that more people know my name."

There have been reports that Rowe might pursue custody of her two children with Jackson. Talking with Rowe, it seems there's a lot she'd like to say she can't or won't say. But she promises that as soon as she can speak freely, she'll "tell all" to "E.T."

There were rumors that she wanted to get back together wth Jackson, but for that, Jann Carl says, you will have to watch "Entertainment Tonight."