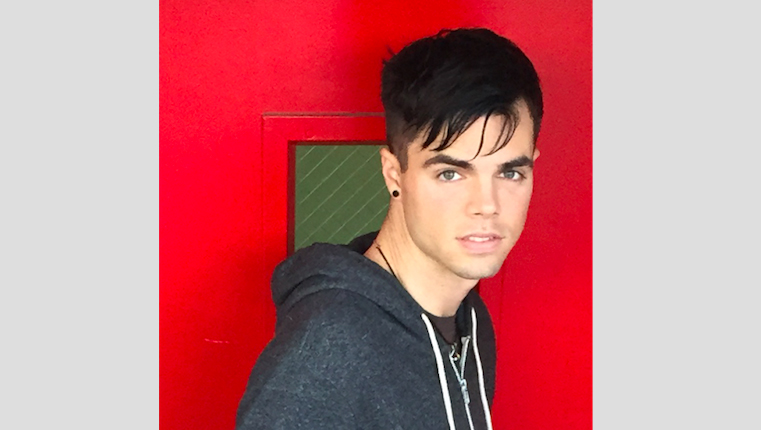 Ewing, 27, talked with CBS News about body image dysmorphia, depression, his road to healing, and how he now stays mentally healthy in a profession where image is everything.

Ewing's health issues started in adolescence. According to the Centers for Disease Control and Prevention, 13 to 20 percent of children living in the United States experience a mental health disorder in any given a year. Research estimates that one in 10 youth has mental health problems that are severe enough to impair how they function at home, school, or in the community.

By sharing his story, he hopes to help other kids and young adults avoid the same pitfalls he experienced and to recognize when to get help. This week, he'll also receive a national award from the Substance Abuse and Mental Health Services Administration (SAMHSA) for his efforts.

Q: Last November, you wrote an article in The Huffington Post about your experience with body image issues and plastic surgery addiction. That was the first time you talked about your mental health struggles publicly. When did you start experiencing symptoms?

A: Basically, it was apparent at a very young age that I had some issues because I was constantly doing destructive behaviors that could make somebody question somebody's mental health. I was doing the whole cutting thing. And wanting to get into a car accident. It was more like a fantasy -- trying to get into an accident so I could screw up my face so I could get it completely fixed. I was bulimic for about three years. There were all these signs of being self-loathing. I didn't have many friends in high school. It was not really a happy time period.

Q: Did your parents notice what was going on?

A: My mother cared really deeply for me and has always given me a lot of love and support. But it didn't really do it for me. I was totally burdened with this self-loathing. And then the plastic surgery began when I was 19 years old.

Q: How did plastic surgery become an addiction?

A: I went to this plastic surgeon. Even though I didn't have any significant problem with my face -- I was just like, "Can you make me look better?" -- he suggested large cheek implants. But it looked so freaking weird. It made my lower cheeks look super hollow. He also never mentioned I was going to have to wear a full mummy face-mask for several weeks afterward and have this bloated face. After two weeks, I took off the facial bandage and he said it'll be back to normal but it looked insane. My face looked blown up like a balloon. It looked like "Tales from the Crypt."

And then I went back to the guy and he said he wouldn't operate again, that it hasn't been long enough. I went to another guy who was a total back door plastic surgeon and he had no problem opening up my face and he did a chin implant and that looked really weird too. It was not well done. I could actually feel and move the implant under my skin.

Over the next couple of years, I had more procedures and each procedure would cause a new problem and then I would want to fix it.

Q: Were you working on "Modern Family" in your role as Dylan at that time? Did your struggles with self-esteem interfere with your work?

A: I've been with "Modern Family" since 2009. This struggle has been happening at the same time. I timed it out so I wasn't looking drastically different, so I wasn't showing, during filming. I took it very seriously, the job, and put a lot of effort and focus into trying to do it right. Because I focused on trying to do it right, all the insecurities weren't such a problem. I had incidences that I wouldn't want them to film me from a certain angle. When you think you're unacceptably unattractive, it's very distracting, and I'd trip up over that at times.

Q: When did you finally recognize that you needed help?

A: I had really bad depression. I returned home to Salt Lake City where my parents live and had to deal with the depression aspect. It was like suicidal thoughts, and at that point you have nowhere to go. It's another kind of rock bottom once you're contemplating death.

My parents were very supportive and there for me, especially my dad.

Q: Your condition is a mental health condition called body dysmorphic disorder. What have you learned about it and how, other than medication, do you treat it?

A: The therapist, basically the words she used, is that I need to recalibrate my brain, and that I'd been in a state of misery for so long that it had become my normal. Now that I'm not miserable, and am living a life that I find fulfilling, my state of mind is better.

I am still self-conscious, no doubt about it. Just like anybody. But I have other things in my life that give my life value and make me happy. I care about my personality and my goals. Those are other factors that trump the others.

My number one thing I do is school. I'm at the University of Utah, and technically am an English major and I take a lot of English classes, but it varies. I don't take it in a way that's like, "I want to get a degree as quickly as possible." I go to school as a way to find mentors, to find things that I'm passionate about and to motivate myself. Not to mention meeting people and getting more experience and becoming more worldly.

Q: Do you have friends and healthier relationships now, are you dating?

A: I'm in a happy relationship, too, which is a first for me ever. At 27, I was like come on, let's get it started. It's somebody I go to school with. It's been five months now.

Q: How do you deal with working in such a looks-oriented profession nowadays?

A: There's an obsession with appearances. I would assume most actresses have had a ton of work done. I don't know if that's true, but I know a large part of them have. But what does that say about the value of a person? There's no shortage of good-looking people. The world doesn't really need good-looking people. The world needs more people who are willing to be progressive about trying to make it a better place. Focusing on being better looking is completely self-serving. Once people start on that road toward worshipping appearances, I don't know if someone can have a balance.

Every art is ethical. I could literally go on for hours about the industry and mainstream media. It's such a broad topic but art and ethics are always hand in hand. If they're only hiring actresses who look a certain way, that's an ethical dilemma -- that's an ethical choice of the producers.

People don't realize film is a blank piece of paper and you can literally fill it with anything, yet any mainstream movie is the same formula and same conventions. Film has unlimited possibilities in terms of sound, acting, writing and now with special effects. Choosing to perpetuate the incessant barrage of [physical perfection], I think that's also an ethical issue because it defeats the purpose of art. Art is supposed to expand the mind. Not brainwash it.

Q: Any advice for kids or parents dealing with body image issues, plastic surgery obsession and depression similar to what you suffered?

A: Parents need to show a lot of concern for the child and keep track of what they're doing and really stay in touch with them and watch to see if body dysmorphia is developing and have an open dialogue with the kid. Kids are going to have secrets. But really talking and creating a family environment where people can be completely honest. Some families don't' really offer that -- they want you to be a certain way. People should create an environment about how they really feel instead of hiding it. And parents should ask kids straight up to be honest with them.

And in terms of the self, I think it's sort of harder. The person has to identify and accept the fact that they're not going to look like Charlize Theron or Brad Pitt. That's OK, it's not the end of the world. Instead of chasing that dream, find a better dream.