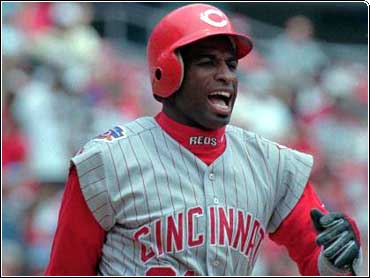 The baseball commissioner's office blocked Deion Sanders' contract with the Reds on Friday, but Cincinnati still expects to have him in its minor league camp in March.

The Reds agreed to a Triple-A contract with the NFL cornerback on Wednesday, giving him another chance to dabble in baseball.

But Sanders had filed for free agency following the World Series and agreed to the deal after the Dec. 7 deadline for re-signing. That caused the commissioner's office to block the deal.

If Sanders remains unsigned in mid-February, when spring training starts, the Reds can ask the commissioner's office to ask the other 29 teams to allow Sanders to sign with Cincinnati's Louisville Triple-A team.

"Past history and past precedents in baseball say the other 29 clubs will pass and allow us to do it," general manager Jim Bowden said. "We think it's just a formality."

Sanders' signing came as a surprise. The two-sport professional tried to resume his baseball career last spring as a Reds minor leaguer, but went home to Texas on May 11 and later refused to play for the Reds when they needed an outfielder.

Instead, Sanders signed a contract with the Washington Redskins that did not rule out a return to baseball. He talked the Reds into giving him another chance last week.

He flew to Cincinnati and met with Bowden, manager Bob Boone and other team officials who wanted to know if he was serious about a baseball comeback. They were convinced enough to offer a nonguaranteed minor league contract.

"We told Deion we really didn't have an interest in him trying to make another comeback unless this time he wanted to try to make a comeback put full time and full effort into baseball," Bowden said. "It may be the first year he doesn't do what he wants, but by years two and three he's young enough that he may be able to keep getting better and may be able to help us."

Sanders, 33, sat out the 1996 baseball season and made a comeback with the Reds a year later. He hit .273 in 115 games before getting permission to go play for the Dallas Cowboys.

After staying out of baseball for two years, Sanders got another chance with the Reds last spring. He agreed to a contract that included a $300,000 minor league salary that would have increased to $600,000 if he was called up to the majors. The contract also included mutual options for $3 million in 2001, $4 million in 2002 and $5 million in 2003.

Sanders was slowed by a knee injury in spring training and batted .200 for Triple-A Louisville before getting permission to go home on May 11. When outfielder Alex Ochoa had an emergency appendctomy a few weeks later, Sanders declined to let the Reds call him up.

The Reds chose not to exercise their contract option for 2001, allowing Sanders to become a free agent. Bowden said the Reds could use another outfielder in the minors as insurance in case one of their regulars gets hurt.

"There's no downside to this - no termination pay, no guarantees," Bowden said. "If we get to the end of spring training and he looks like he's the same guy we saw in Louisville last year, he gets released and he goes home and he plays football and we go and do our thing."