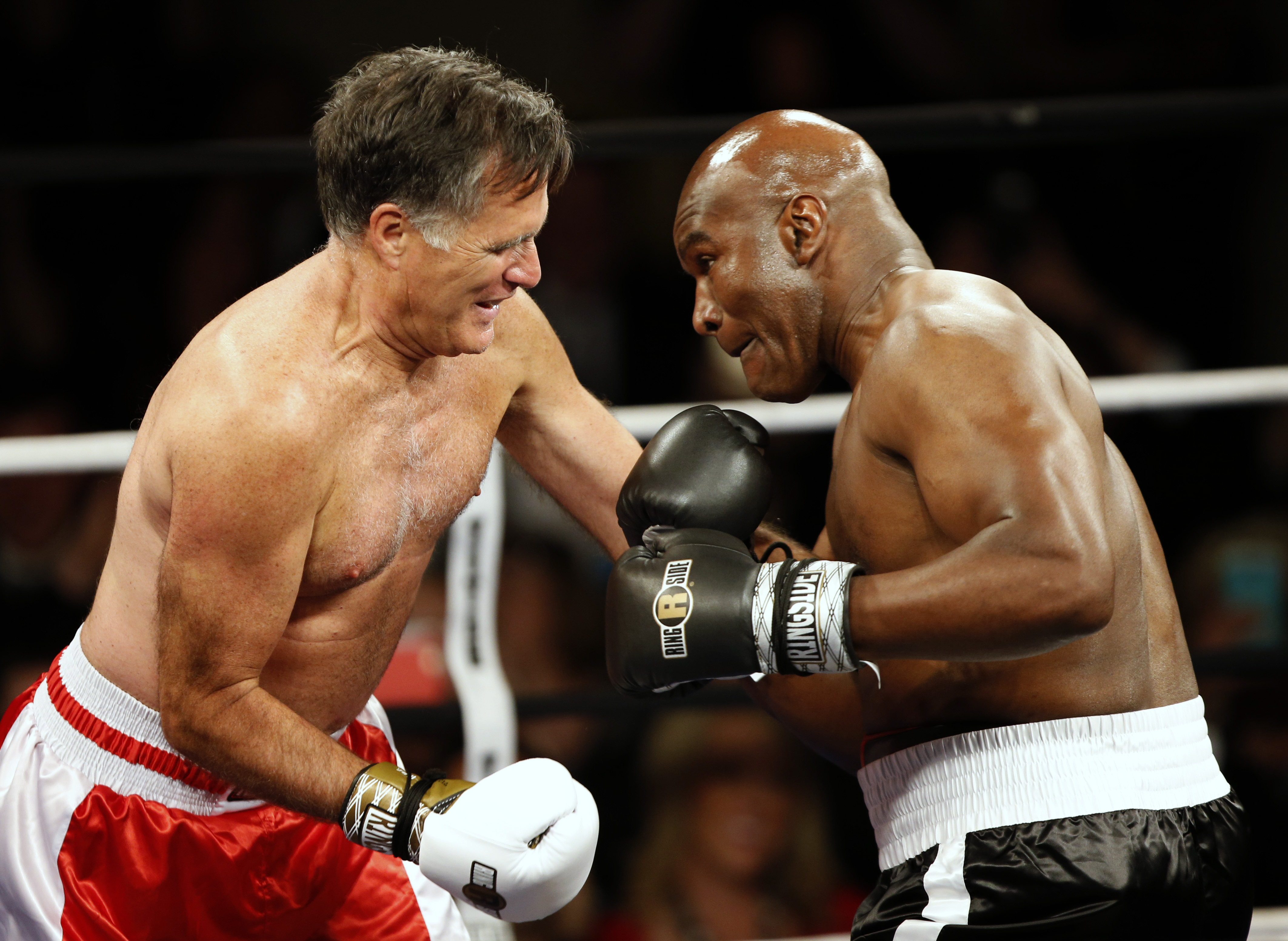 Romney "threw in the towel after two rounds," according to Deseret News sports writer Jody Genessy, who attended the bout.

Holyfield did allow Romney to land a few punches.

And he even hit the mat.

Which put Romney on the run.

Holyfield was then declared the winner. Romney joked afterward that Holyfield was whispering to him that he floated like a bee and stung like a butterfly, according to The Hill.

The black-tie event raised money for the Utah-based organization CharityVision, which helps doctors in developing countries perform surgeries to restore vision in people with curable blindness.

Romney's son Josh, who lives in Utah, serves as a volunteer president for CharityVision. Earlier this year, the former GOP presidential nominee and several members of the Romney family traveled to India to see the organization at work.

Corporate sponsorships for the event ranged from $25,000 to $250,000. Organizers expected to raise $1 million, with 100 percent of the proceeds going to Charity Vision. The money will pay for things like medical equipment, vision screenings, eye surgeries and training for doctors in poverty-stricken areas.

Ahead of the fight, Romney and Holyfield participated in an official weigh-in Thursday night.

Romney, 68, weighed in at 179 pounds and Holyfield, who is 16 years younger and endowed with broader shoulders than the former presidential candidate, weighed in at 236 pounds.

In a web video previewing the event, Romney and Holyfield had hyped the event.

"It's true, I don't have much of a right hook, but when I get somebody's ear, I can be pretty formidable," Romney said.

"Mitt you can't run, you can't hide. Come get your whoopin'," Holyfield said.

Romney, the most-high profile Mormon in America, is hugely popular in the state, where more than 60 percent of the residents are members of The Church of Jesus Christ of Latter-day Saints.

Beyond his religious connections, the former Massachusetts governor is remembered by many for turning around Salt Lake City's 2002 Winter Olympics after a bribery scandal.

Romney has recently built a home in the Salt Lake City area and registered as a Utah voter.