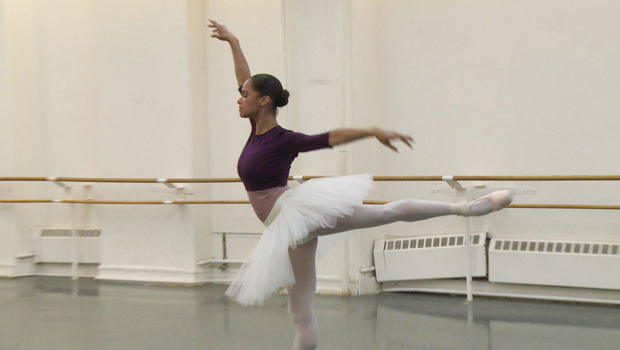 Tchaikovsky's ballet "The Nutcracker" is a Yuletime favorite, and the star of one current production is building a reputation as an audience favorite as well. Quite a personal turning point for Misty Copeland, a ballerina who's often on pointe (the French term for being on one's toes). Anthony Mason has been watching her on the move:

At 9 a.m. riding the subways of New York, Misty Copeland is just a face in the crowd. At work, it's different.


The only African-American soloist with the American Ballet Theatre, Copeland has the lead in its production of "The Nutcracker" at the Brooklyn Academy of Music this week.

At 32, Misty Copeland is ballet's first breakthrough star in decades. She's featured in a commercial for Under Armour; she's danced with Prince on tour; written a bestselling autobiography; and is developing a new TV show.

At a photo shoot for Amtrak's magazine, Mason asked, "Has your life gotten crazy?"

"Yes, it's absolutely insane," she replied. "But in the best way."

The exposure helps her mission: to be a cover girl for a new kind of ballet. "I think that it's going to open up people's minds to what ballet should be in this day and age."

"What is it ballet should be in this day and age?" asked Mason.

"It should be open to anyone being a part of it."

Copeland is an unlikely ballerina. One of six kids, she had an itinerant childhood in California as her mother married and remarried four times.

"We were just all together, the Copelands, trying to survive," she said.

Dancing was her escape. "Whenever there was chaos in my house, whether it was arguing, being in a cramped space with all of us kids and screaming, I found an empty space where I could just put music on and move."

At 13, a teacher recommended she take ballet classes at the local Boys and Girls Club in San Pedro. Less than two years later, she entered her first competition at the L.A. Music Center, and won it.

But Copeland, who had moved in with her dance teachers, Cindy and Patrick Bradley, to get more intense training, soon found herself in the middle of a nasty public custody dispute with her mother, who wanted her to come home.

"That must have been pretty unsettling for you," said Mason.

"I still feel like it's scarred me," Copeland said. "And it's something a child of 15 years old should never experience. But I made it through and I'm here."

At 18, she moved to New York to join the world-renowned American Ballet Theatre. "And that's when I looked around me, and in a company of 80 dancers realized I was the only black woman. I felt completely isolated and alone, and that kind of when it all hit me."

She thought about quitting the company, but couldn't: "I felt I had a responsibility to represent so many dancers that had come before me that aren't recognized even to this day."

Dancers like Raven Wilkinson, who posed with her at the Amtrak shoot. Copeland first saw her in a documentary about the Ballet Russe; Wilkinson had toured with the company in the U.S. in the fifties, until threats in the South made her leave for Holland.

"It was like I found a missing piece of myself, and a connection" said Copeland.

Raven saw hope in Misty, too. But they did not meet until a few years ago: "We came towards each other," recalled Raven, "and we just embraced each other. I was hugging Misty, but I thought, 'Why are they getting all those cameras out?' And then I realized it's a very special moment. So it's kind of historic. We're history.

In April of 2012, Copeland's big breakthrough came when she was given the lead in Stravinsky's "Firebird." Her picture went up on the facade of the Metropolitan Opera.

But in rehearsals she was feeling pains in her shin -- what would turn out to be six stress fractures in her left tibia.

" That's gotta be scary in a way to walk around with that," said Mason.

"Any of those times could have been the last time I danced had my bone completely snapped," Copeland said.

"Did anybody know you were hurt?" asked Mason.

"No, definitely not on the artistic staff."

"I was 29 years old, and I was really given the biggest role of my career at that point," she said. "And I felt, had I not done this performance and proven myself that I was capable and mature enough to become this character, that I wouldn't be given the opportunity again."

"It was career life-or-death?"

She won rave reviews. And after recovering, she performed the principal role in "Swan Lake" with ABT in Australia this past summer.

Mason asked, "What does it mean to you to be in 'Swan Lake'?"

"It's what ballet is," she said. "It's kind of reaching the pinnacle. It's the most challenging in every way, but to be a black woman and to be given that role is even bigger.

"I think it's just changing the way people are viewing ballerinas," she said. "You just typically think of this long, tall, white woman, Russian usually. Soft and willowy. And I'm not!"

All that eludes Misty Copeland now is the title of principal dancer; she would be the first African-American female ever at the American Ballet Theatre.

"For me," she said, "it's just proving myself to people -- that's the most daunting."

"What are you proving?"

"Do you feel like you're still proving this?" asked Mason.

"I don't think it will ever end," she replied. "I think that it's something that's going to take the ballet world a very long time to get used to. And I don't think its going to happen within my lifetime. But it's starting."