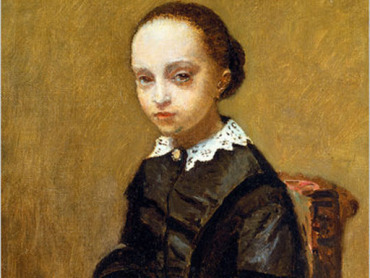 NEW YORK (CBS/AP) Turns out the courier who said he "lost" a $1.3 million painting while on a drunken bender, when everyone suspected he was trying to pull some kind of "Thomas Crown" con, might actually just be the drunk doofus he says he is.

A Fifth Avenue doorman recently turned the lost 1800s-era masterpiece in to the NYPD, saying that he found it back in July in some bushes when he came to work one morning. And the building where he works is just blocks away from the bar where James Carl Haggerty says he got drunk before losing the prized painting.

The doorman, who works across from New York's Metropolitan Museum of Art, told investigators that he found the coveted artwork, "Portrait of a Young Girl," outside his building and kept it for weeks before realizing it was the missing painting at the center of a bizarre legal web.

Painted in the mid-1800s by Jean-Baptiste-Camille Corot, the masterpiece vanished in late July after Haggerty, a middleman, showed the work to a prospective buyer at a Manhattan hotel several blocks from the doorman's building. The buyer passed on the painting and Haggerty claimed he later got drunk and lost it.

One of the painting's owners, Kristyn Trudgeon, sued him over the loss, then dropped the case once she realized that the painting's co-owner - her boyfriend, Thomas Doyle - who had asked Haggerty to transport the painting, had previously pleaded guilty in 2007 to stealing an Edgar Degas sculpture from a wealthy collector.

Doyle was then indicted in federal court on wire fraud conspiracy charges, accused of lying about the painting's value and trying to defraud an investor.