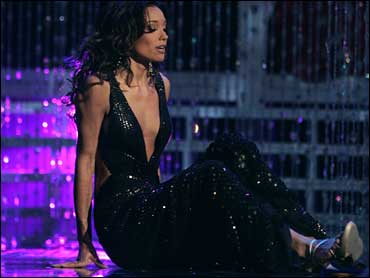 Smith, who was named fourth runner-up at the pageant, lived a beauty queen's worst nightmare during the evening gown competition: she slipped and fell on stage.

The tumble came after she'd taken only eight steps in her high heeled shoes. Smith landed on her bottom and broke the fall with both hands, but she immediately jumped right back up and took a few more steps before posing with one hand on her hip looking over her shoulder.

Smiling the whole time, she continued down the catwalk as the audience cheered, although she was later jeered by the crowd during the interview phase of the pageant.

Smith earned a respectable 8.547 score in spite of the fall, putting her in fifth place in the evening gown competition.

Mori, a 20-year-old dancer, is the second contestant from Japan to win the world beauty title.

Dressed in a black, red and purple Japanese-style gown, Riyo Mori nervously grabbed the hands of first runner-up, Natalia Guimaraes of Brazil, just before the winner was announced. Then she threw her hands up and covered her mouth, overcome with emotion.

But she gathered herself together enough to catch the diamond-and-pearl-studded headpiece valued at $250,000 as it slipped off her head when Miss Universe 2006 Zuleyka Rivera of Puerto Rico crowned her. Mori immediately placed it back on her head.

The last time Japan won the pageant was in 1959 when Akiko Kojima became the first Miss Universe from Asia.

"She is an amazing champion, an amazing woman and I hear that they go totally insane in Japan, so that's good," said Donald Trump, who co-owns the pageant with NBC.

The ten semifinalists who took part in the evening gown competition were the contestants from Brazil, Venezuela, Korea, Japan, USA, Tanzania, Angola, India, Mexico, and Nicaragua.

Those contestants were whittled down to the five finalists from Venezuela, Korea, Brazil, USA, and Japan.

2Mori, from the small town of Shizuoka at the base of Mount Fuji, won the cheers of the Mexico City audience when she opened her interview, saying 'Hola, Mexico!'

"I learned how to always be happy, be patient and to be positive, and this is what I want to teach to the next generation," she said during the interview competition.

The daughter of a dance school operator, Mori said her grandmother told her as a child that she wanted her to be Miss Japan before she turned 20.

"From the very beginning, I entered the competition with high hopes and an unswerving determination to make this dream a reality," she said in a pre-competition interview.

She wants to someday open an international dance school in Tokyo.

"Right now I am only 20 years old, so I'm really excited about what I'm going to be able to do at this age to benefit society," Mori said after winning.

Smith was booed during her interview and several audience members chanted "Mexico! Mexico!" until she spoke in Spanish, saying "Buenas noches Mexico. Muchas gracias!" which earned her applause. Mexico has a fierce rivalry with its northern neighbor.

Also finishing in the top five were second runner-up Ly Jonaitis of Venezuela and third runner-up Honey Lee of Korea.

The winner travels the world for a year on behalf of charities and pageant sponsors.

The Miss Universe pageant chose from 77 contestants to find its 2007 beauty queen.

The field was winnowed to 15 last week during preliminary judging in the contest's swimsuit, evening gown and interview categories, but the finalists were not announced until early on during Monday's show, allowing all 77 to be introduced to the television audience.

3Mexican pop group RBD performed during the live, two-hour telecast, broadcast on NBC and Telemundo. 1999 Miss Teen USA Vanessa Minnillo and "Extra" weekend correspondent Mario Lopez were the hosts of the show, expected to be viewed by more than 600 million people in more than 180 countries.

The winner spends a year representing charities and pageant sponsors.

The pageant was last held in Mexico City in 1993, when Torres was crowned.