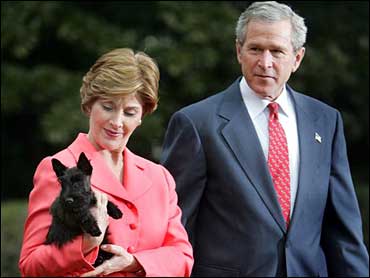 She's finally at the White House. Miss Beazley, the Scottish Terrier puppy, has joined the first family. Miss Beazley was a birthday gift from the president to the first lady. Now she's ten-weeks old old and ready for her close-up.

"Here's our new little baby, Miss Beazley," Laura Bush said while introducing her to the press, on the South Lawn of the White House. "Isn't she the cutest?"

But what about –- the other Bush dog -- Barney? Till now, he's been the star of the show, and he wasn't quite sure what to make of this new creature moving in on his turf.

It shouldn't have come as a surprise. After all, this holiday season's

Will Barney be able to share the spotlight with his new 'sister'? Actually, niece. Barney's half-brother is Miss Beazley's father.

Only time will tell.

There's a long history of dogs in the Bush family. Spot, the president's English Springer Spaniel, died last year at the age of fifteen.

Spot was actually born at the White House. Her mother, Millie, belonged to the first President Bush, who introduced Spot to Americans in a similar South Lawn ceremony.

This time, the star attraction wasn't interested in posing. The president was eager to get back inside, but Miss Beazley had other ideas and headed straight for the shrubbery.

"Well, so much for you all," Mr. Bush joked to the assembled press corps.

That brings the pet total back to three -- two dogs and the rarely-seen cat known as Willie.

The new dog was named after Uncle Beazley, the dinosaur in the children's book, "The Enormous Egg," by Oliver Butterworth.