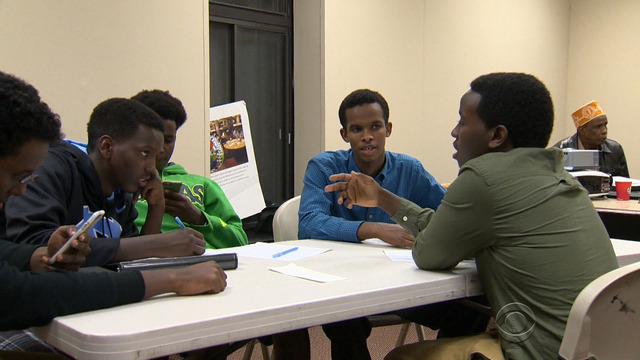 MINNEAPOLIS -- A new report by Congress says more than 250 Americans have attempted to join ISIS, and one in four of them is from Minnesota, many of them former refugees.

Minneapolis might seem a long way from the wars in the Middle East and North Africa. But extremist groups have found the city to be fertile ground for recruits.

Dahir Ali is exactly who terrorist groups like ISIS are looking to recruit -- the 18-year-old is young, Muslim and often feels like an outsider.

"People come up to me and say, you know, you're this, you're that. You're a terrorist," said Ali.

He grew up in the Cedar Riverside community in Minneapolis, which has the largest Somali population in the country. Many came as refugees in the 1990s. The unemployment rate here is 21 percent, three times the state average. And an alarming number of young Somali men from this neighborhood have left to join extremist groups. Since 2007, two dozen have joined AL-Shabab in Somalia.

"It's time for Muslims to really stand up and really fight these groups and defeat them through faith and military too," said Imam Adbisalam Adam, who is part of a community task force created this summer to stop the radicalization.

The appeal is "the sense of accomplishment to be something bigger than yourself. It's that sentiment that extremists tap into," said Adam.

He also noted that "there's no contradiction to being a Muslim, being an American, and being a Somali -- all three are good."

The city has also deployed Somali police officers like Mukhtar Abdulkadir and Abdiwahab Ali to develop trust in a neighborhood suspicious of authorities. They walk the beat, meeting elders, interacting with the young, and handing out contact cards written in Somali.

"They call us, you know, before they call 911," said Abdulkadir.

But they feel the frustration when one of those calls comes too late.

"They call and say mom, I joined a terrorist group. We'll meet in heaven," said Ali.

There are at least 15 other cases being investigated.

The task force has the support of Minnesota's U.S. attorney -- but the group says it still has a lot of work to do within their community.