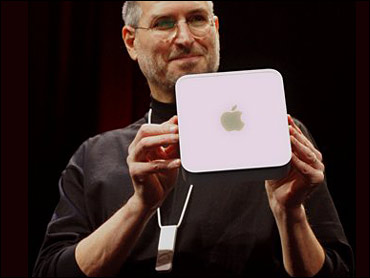 Apple Computer Inc. chief executive Steve Jobs introduced a cut-rate computer the size of a paperback on Tuesday and a tiny iPod that starts at $99, but holds fewer songs than its hard drive-based music players.

The new products seek to make inroads against the traditionally more affordable PC market and against lower-cost competitors to Apple's wildly popular iPod.

The Mini Mac computers, smaller than even some stand-alone external computer drives, go on sale Jan. 22. They lack a monitor, mouse and keyboard. The 40-gigabyte Mini Mac will cost $499, an 80-gigabyte model $599.

"People who are thinking of switching will have no more excuses," Jobs said during a keynote speech at Macworld and Expo. "It's the newest and most affordable Mac ever."

The product for the first time puts Apple in the budget desktop PC arena, which so far has been largely confined to personal computers that rely on Microsoft Corp.'s Windows operating system.

LulzSec vs the world: Hackers just having fun?

Building upon the success in a rapidly growing niche that it already dominates, Apple also is rolling out two lower-priced versions of its iPod music players.

The iPod Shuffle, available immediately, is smaller than most packs of chewing gum and weighs less than an ounce.

Unlike the hard drive-based iPod Mini, it doesn't have a display. There's a scroll wheel for the controls so a user can either play the songs in order or have the device automatically shuffle stored songs in a random order.

Apple is selling two versions of the iPod Shuffle.

The smallest will have 512 megabytes of storage and cost $99. A one-gigabyte version, which holds 240 songs, will sell for $149. The lowest cost iPod is the mini, which costs $249 for four gigabytes — enough to store about 1,000 songs

"We want to bring even more people into the digital revolution," Jobs said.

The iPod has helped infuse new life into Apple. In the past year, the Cupertino-based company's stock has tripled on strong sales of the iPod, which is emerging as one of the 21st century's first cultural icons.

Analysts expect the new iPods will help Apple hold its lead in the MP3 market.

Because many rival flash-based players have just 256 megabytes of storage, Apple is "sticking to its cut-above position," said Susan Kevorkian, an industry analyst with IDC. "There are plenty of people who want an iPod but haven't been able to afford the $249 Mini, so offering these lower-priced players allows Apple to attract not just new users but those who already own an iPod but want an even smaller version."

With the Mac Mini, Jobs is setting out to expand Apple's 3 percent share of the U.S. computer market.