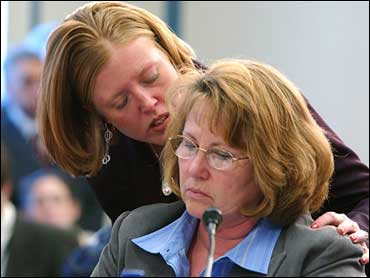 There was no way out and it didn't sound like anyone was coming to help, said the letter a Sago coal miner left in his lunch pail.

Holding back tears, Sarah Bailey, the daughter of George Hamner Jr., shared with a House panel Monday the note her father left as hope faded in last month's mine disaster in West Virginia.

"We don't hear any attempts at drilling or rescue," Hamner wrote in the letter at 2:40 p.m., about eight hours after the explosion on Jan. 2. "The section is full of smoke and fumes, so we can't escape."

Hamner went on to say in the note to his daughter and wife, Debbie, "Be strong, and I hope no one else has to show you this note. I'm in no pain, but don't know how long the air will last."

One miner died immediately after the blast. Officials said carbon monoxide poisoning caused the death of 11 other miners. One miner, Randal McCloy Jr., survived the accident and is recuperating at a rehabilitation hospital.

Other miners at Sago also left notes. Shuttle car operator Jim Bennett left one with four entries, with words getting fainter and trailing off the page at 4:25 p.m. — nearly 10 hours after the blast.

The first rescue team did not enter the mine until 5:30 p.m. The miners were brought out more than 40 hours after the explosion occurred.

Monday's forum was organized by House Democrats on the Education and the Workforce Committee who said Republicans declined to schedule a hearing on mine safety. Also on hand were relatives of other miners killed at Sago and families of those killed in other mine accidents.

"It breaks my heart to know there is modern technology that could have prevented my husband's death, and the Sago mine wasn't equipped with it," said Debbie Hamner.

West Virginia recently passed a law mandating safety changes in underground mines. Other state legislatures and Congress also are considering such legislation, and the federal agency that oversees the industry is pursuing an emergency rule that would put extra oxygen packs underground and improve escape routes.

Amber Helms, whose father, Terry Helms, was killed at Sago, told the panel she decided to testify to ensure lessons were learned and victims were remembered.

Her father was "an extraordinary person, a perfect father," Helms said. "He was always there."