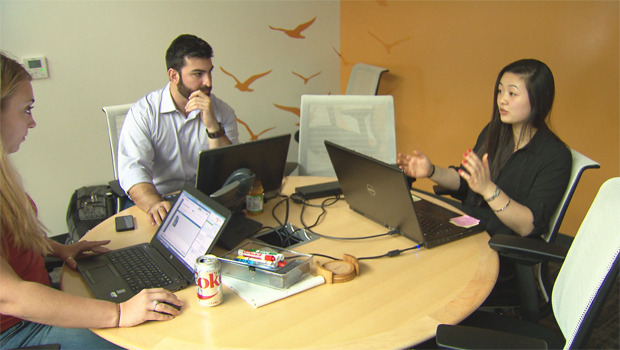 Millennials -- we've all heard the label loosely applied to the generation that came of age around the year 2000. But mysteries abound. Ben Tracy reports our Cover Story:

"What's the matter with kids today?"

It's more of a complaint than a question, and it dates back long before 1963's "Bye, Bye Birdie." The generation that follows one's own never quite seems to measure up. The "Greatest Generation" spawned the "Baby Boomers" -- and the Boomers gave birth to the Millennial Generation, so-named because they are coming of age in the new millennium.

Born between 1981 and 2000, there are some 75 million millennials in this country, and they're ready to take over the workplace -- though plenty of people think the new kids in the office have a lot to work on.

Jean Twenge is a professor of psychology at San Diego State University, who has poured through decades of self-assessments by millions of young people, in which they reported how accomplished, how motivated, and even how special they consider themselves to be. The title of Twenge's book seems to say it all: "Generation Me."

"We do know from looking at narcissism scores among college students, from the '80s to more recently, that this generation does score a little higher on narcissism," said Twenge. "However, that's certainly not all of them. It's just that it's moved from maybe one out of eight to about one out of three who score very high in narcissism."

One of Twenge's research papers lays it out in stark terms: Millennials in the workplace are defined by "the combination of not wanting to work hard but still wanting more money and status."

"This generation's facing a challenging, competitive job market," Twenge said. "And the problem is, as I see it, they haven't been prepared for things to be so challenging, perhaps because they got so much praise growing up, and they got a trophy just for showing up when they did sports leagues.

"Unfortunately, the workplace doesn't work that way. You have to do a lot more than show up."

The beginning of 2015 marked the point when Millennials became the dominant generation in the American workforce: more than one in three workers are now Millennials.

This clash of generations has been parodied on YouTube (a very Millennial media outlet). This video mocks both Millennials as well as those boring, over-the-top corporate training films.

It was made by Stefan Van Engen, age 39, a member of Generation X, who works at the web-media company, Bedrocket, which is largely staffed with millennials.

"I don't think of this generation as the most self-deprecating generation;" Van Engen laughed. "I think they're very sensitive."

Van Engen estimates three-quarters of his audience are millennials themselves, so keeping them in on the joke was essential, even if the truth sometimes hurts.

"The need for praise is absolute," said blogger Erin Lowry. "That is a big, in my opinion, issue in our generation. We don't particularly respond well to criticism, and we absolutely want praise immediately."

Lowry created the blog Broke Millennial to share advice and network with her fellow Millennials trying to enter the workforce after the Great Recession. Although she spreads her gospel online, Lowry sees Internet culture itself as part of the problem.

"If you put a picture on Facebook, you want to be in double-, triple-digit likes by the next hour or two," she said. "If you put something on Facebook and nobody likes it, it feels like, 'Oh, I failed!' And it's the instant gratification cycle that we've gotten into that has led to a bit of a problem in the workforce as well."

"The stereotypes we hear are that Millennials are narcissistic, that they're over-confident, that they don't respect authority or the way things have been done," said Tracy.

"What generation doesn't have those feelings?" replied Doug Woods. "I grew up in the '60s. We were totally rebellious, and I think it's part of being young."

Woods is a Baby Boomer, and an unabashed advocate of the Millennials he employs at his northern California-based construction firm, DPR. A recent survey reports only about a quarter of Millennials believe their employer is taking advantage of their full potential.

Woods recalled being interview by the president of the company back when he started out: "He asked what I wanted to do; I said I wanted his job," Woods laughed. "I hate that where I used to work, the leader used to talk about people weren't ready because they didn't have enough gray hair. To hell with that! There's some really smart people out there. Work with 'em and let them help you grow."

"You're a Millennial at heart? I think this is why this is working out for you?" Tracy said.

Yet for all the talk about Millennials, we learned from Woods' employees that millennials don't talk much about themselves. Michael Pearson says they never use the term "Millennials," and don't much like it.

DPR's millennial employees may not embrace the label, but they confess it sometimes fits: "Yeah, at times, I certainly am a little bit impatient," Pearson laughed. "If that's a characteristic of our generation, then that's why I'm it!"

The way Deepti Bhadkamkar and Brian Bolandi see it, those traits are nothing to apologize for.

Tracy asked, "The whole idea of 'Everyone's a winner,' 'You can be anything you want when you grow up' -- did you hear those things growing up?"

"Does it set you up for disappointment, though, at some point when you realize there is a limit?"

"That's life!" laughed Bolandi. "You're not always going to get what you want, but you can, you know, if you set your goals higher than are really attainable and if you fall short, you've still done great."

And now that Millennials are settling into the office, it won't be long before they get to work on worrying about the next generation.

"I'm 28 years old and I found myself saying, 'Kids these days!'" laughed Bolandi.