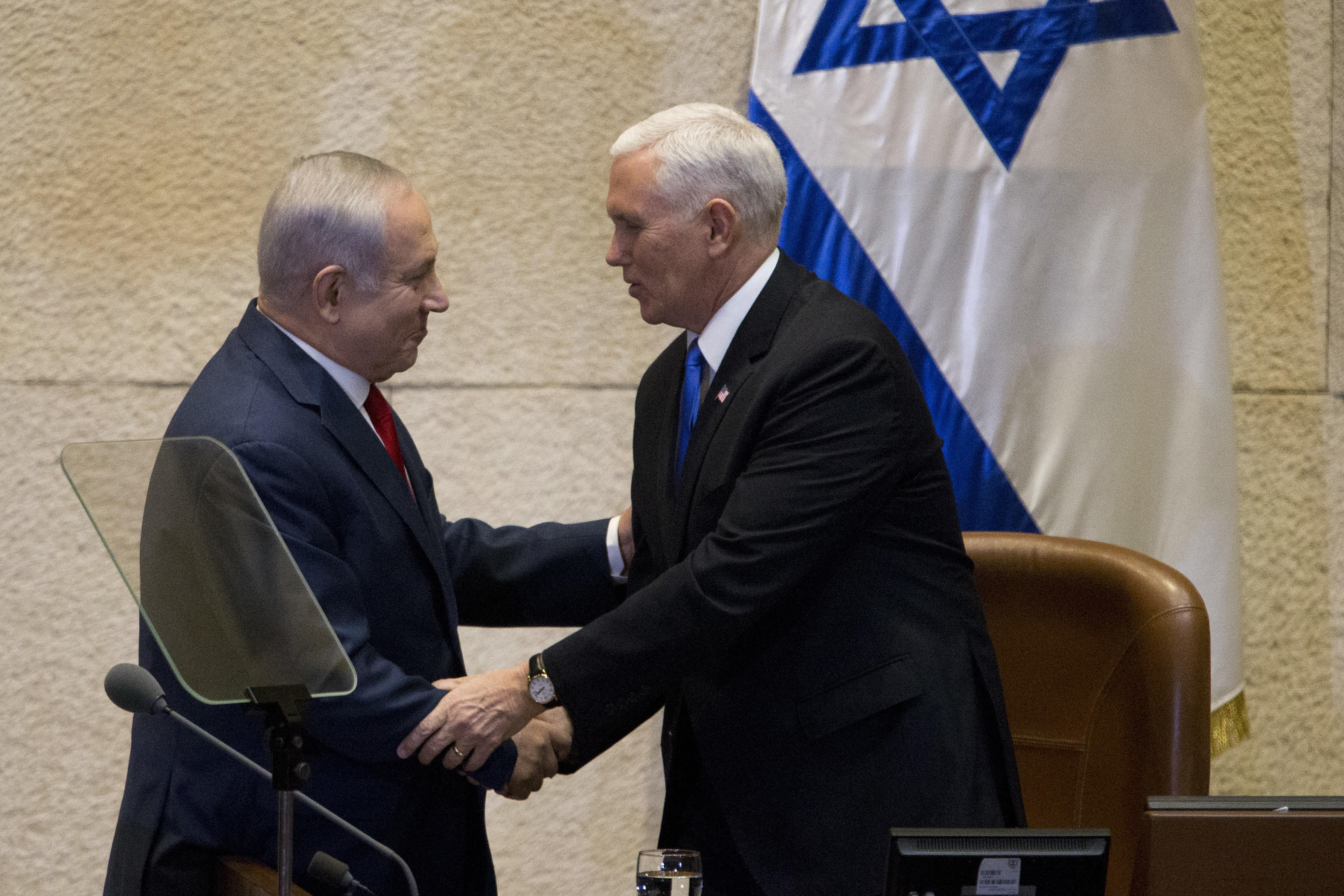 JERUSALEM -- Vice President Mike Pence addressed the Israeli Knesset, or parliament, on Monday, strongly reaffirming the United States' unwavering commitment to its Middle Eastern ally and lauding his boss, President Donald Trump, for righting "a 70-year wrong" with his contentious decision to recognize Jerusalem as the capital city of the Jewish state. Pence told the gathered lawmakers that Mr. Trump had kept "his word to the American people" in recognizing Jerusalem.

But in spite of Pence's assertion that the U.S. remains "fully committed to achieving a lasting peace between Israelis and Palestinians," Jerusalem move has left the two key parties to the already flailing peace process further apart than they have been in years. The Palestinians are boycotting Mr. Pence's visit to the region over the dramatic pivot away from decades of U.S. foreign policy.

Pence committed in his speech to the Knesset to seeing the U.S. Embassy in Israel moved from Tel Aviv to Jerusalem and reopened next year -- shortening the schedule on what has been another massive bone of contention with the Palestinians and the wider Arab world.

While Pence's declaration of a quicker move into a new embassy is sure to heighten the frustration of Palestinians and America's Arab allies, it also highlights differing opinions within the Trump administration. CBS News correspondent Margaret Brennan reports that Secretary of State Rex Tillerson has yet to sign off on the safety plans to approve what Pence announced in Jerusalem.

He will do so, reports Brennan, when he's sure that safety and security concerns are met. Administration officials say Tillerson and Pence are on the same page, despite the coordination issue with the announcement. Brennan reported last week that the decision to shorten the timeline for the move was made at the urging of Jared Kushner and his team, largely for political reasons and against the advice of the State Department, which is responsible for the security of U.S. personnel abroad.

President Trump's deputy kicked off his first visit to Israel by meeting Israeli Prime Minister Benjamin Netanyahu in Jerusalem. In spite of the fact that he flew into the Middle East on a wave of Palestinian anger over the Trump administration's unilateral recognition of the holy city as Israel's capital, Pence declared his hope that the world was witnessing "the dawn of a new era" in stagnant peace talks which have daunted politicians across the planet for decades.

CBS News Radio correspondent Robert Berger reports Pence was to hold two days of talks with Israeli leaders and visit the Western Wall in Jerusalem's disputed Old City, but the centerpiece of his visit to Israel was his speech to the Knesset.

He has received a warm welcome in Israel, which has praised the American decision last month to recognize Jerusalem as Israel's capital. But that decision has infuriated the Palestinians and upset America's Arab allies as well.

Meeting with Netanyahu, Pence said it was an honor to be in "Israel's capital, Jerusalem." Netanyahu told Pence it was the first time a visiting dignitary could utter those three words along with him, and he thanked Pence for Mr. Trump's "historic" recognition of Jerusalem. The Israeli leader also lauded the American-Israeli alliance, which he said has "never been stronger."

He told the Knesset that he would "strongly urge" the Palestinians to rejoin a peace dialogue.

Pence said he was grateful to be representing Mr. Trump and that his decision to designate Jerusalem as the Israeli capital would "create an opportunity to move on in good faith negotiations between Israel and the Palestinian Authority."

The vice president said he was hopeful "we are at the dawn of a new era of renewed discussions to achieve a peaceful resolution to a decades-long conflict."

Pence will not meet with Palestinian officials, who are boycotting his visit.

Before Israel, Pence stopped in Egypt and then Jordan, where close U.S. ally King Abdullah II appealed to him to "rebuild trust and confidence" in the possibility of a two-state solution to the Israeli-Palestinian conflict following the fallout from the administration's decision on Jerusalem.

Pence, in turn, tried to reassure the monarch that the Trump administration remains committed to restarting Israeli-Palestinian peace efforts, and that it views Jordan as a central player.

The vice president said that "the United States of America remains committed, if the parties agree, to a two state solution." That caveat deviated from long-standing U.S. support for a two-state solution as the only possible outcome of any peace deal.

President Trump's pivot on Jerusalem last month infuriated the Palestinians, who seek the Israeli-annexed eastern sector of the city as a future capital. They accused the U.S. of siding with Israel and said Washington can no longer serve as a mediator.

Jerusalem is the emotional centerpiece of the long-running conflict, and Mr. Trump's policy shift set off protests and condemnation across Arab and Muslim countries. Abdullah expressed his concerns about the regional fallout from the Jerusalem decision to Pence.

"Today we have a major challenge to overcome, especially with some of the rising frustrations," he said. He described the Pence visit as a mission "to rebuild trust and confidence" in getting to a two-state solution, in which a state of Palestine would be established in the West Bank, Gaza Strip and east Jerusalem, lands Israel captured in 1967.

Another cause of concern for Jordan is the Trump administration's decision to move the U.S. Embassy in Israel from Tel Aviv to Jerusalem. Jordan vehemently opposes such a move if taken ahead of an Israeli-Palestinian partition deal.

Israel views Jerusalem as its unified capital, but a longstanding international consensus holds that the city's final status should be decided through negotiations, which was also U.S. policy going back decades.

Palestinians view Mr. Trump's recognition of Jerusalem as Israel's capital as a blatantly one-sided move. Palestinian President Mahmoud Abbas said he would not meet with Trump administration officials and called off a meeting with Pence that had been scheduled for mid-December.

Pence was to deliver a speech to the Israeli Knesset, or parliament, later Monday before holding a joint news conference with Netanyahu. The two men were then to have dinner together in Jerusalem.