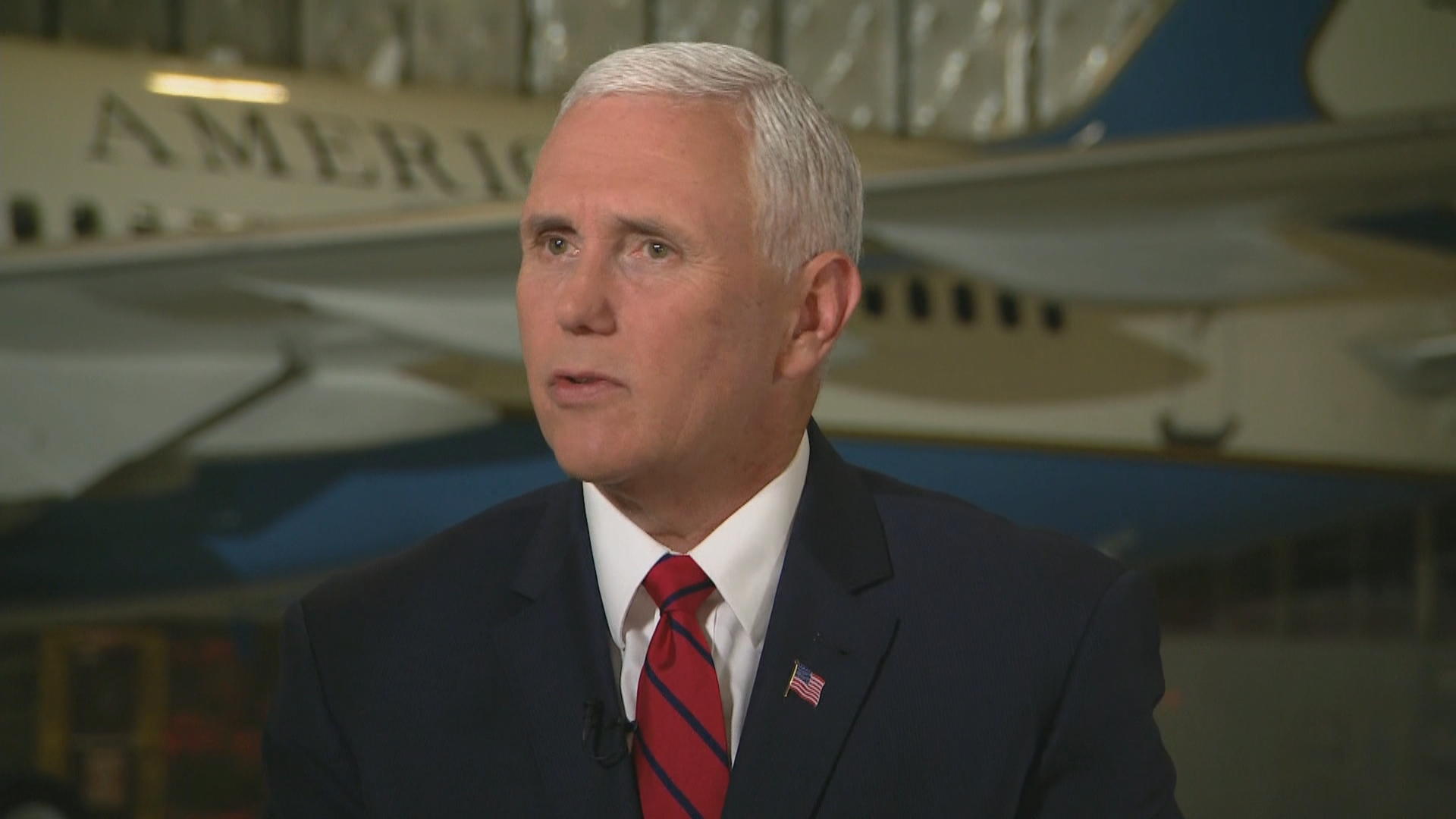 As President Trump and first lady Melania Trump welcomed home three Americans who have been imprisoned in North Korea, Vice President Mike Pence appeared to suggest that more Americans may be on their way home in the wake of the president's decision on the Iran nuclear deal.

In an interview with "Face The Nation" moderator Margaret Brennan on "CBS This Morning" just hours after the three men, Kim Dong Chul, Kim Hak Song and Tony Kim, landed on the tarmac of Joint Base Andrews, Pence said the "deeply moving" moment was a hopeful sign that things might be different with North Korean dictator Kim Jong Un.

"It is accurate to say that North Korea has taken steps so far, made commitments so far and making it possible for these three Americans to come home before there were any concessions even offered by the United States or our allies gives us hope this may be different," said Pence.

He added, "We very much appreciate the statements and the efforts that Kim Jong Un has made so far to move us toward the path to peace."

While Pence said the men are in "such good spirits" as they receive medical attention at Walter Reed Medical Center, the fact that a previously detained American in North Korea, UVA student Otto Warmbier, could have been home with his family too, was not lost on the vice president.

"While we received this news with joy, that Otto was on all our hearts and their family was in our prayers. We got Otto home last year, but it wasn't soon enough and we lost him," said Pence of his conversation with the Warmbier family.

Asked by Brennan if the U.S. was open to similar swaps in Iran to bring home at least four American prisoners, Pence said, "I believe we are always interested in opportunities to bring Americans home" but noted the U.S. sent a "pretty strong message" to Iran this past week as Mr. Trump announced his decision to withdraw from the "deeply flawed" Iran deal.

Pressed by Brennan on whether the president's new policy on the deal could in fact impede the chances of the prisoners' ability to return home, Pence said "we're engaging on the possibility of a new deal which may create opportunities for-- not only addressing issue of Americans that are detained in Iran, but also checking the extraordinary malign influence and support for terrorism that Iran continues to propagate across the region."

Read the transcript of "CBS This Morning"'s interview with the vice president below:

MARGARET BRENNAN: Thank you very much Mr. Vice President. What condition are these prisoners in?

VICE PRESIDENT MIKE PENCE: Well, they're receiving detailed medical attention – have since they were wheels up from North Korea – but all of them were in such good spirits; to be able to have opportunity to visit with them on tarmac after the President and the First Lady brought them out on the plane -it was deeply-uh- deeply moving to Karen and me, and to have a few words with them to hear their expressions of support for President their gratitude to country, their gratitude to the prayers of the American people. I will remember for the rest of my life. We– we very much appreciate the statements and efforts that Kim Jong Un has made so far to move us toward the path to peace.

BRENNAN: What does release actually signify to you, though, about Kim's willingness to negotiate a nuclear arsenal?

PENCE: When negotiations for denuclearization of North Korea failed in the past –and that was that parties came together, promises made, and then promises were broken. But the promises weren't made by North Korea until there were concessions and resources made available.

BRENNAN: And you don't see this summit as a concession?

PENCE: Well, what I see is – when the South Koreans came with the request for meeting, and said that Kim Jong Un had said he was prepared to suspend missile testing, suspend nuclear testing not object to American military exercises and was requesting summit, I was sitting next to the President on virtually on the spot he said "yes, we'll do it". And it's because I think the president senses an opening that may result in a historic agreement. As the President often says we'll see, but - but it is accurate to say that North Korea has taken steps so far, made commitments so far in making possible for these three Americans to come home before any there were any concessions even offered by the  US or our allies –gives us hope this may be different.

BRENNAN: You've been speaking with the Secretary of  State who has been on the ground in Pyongyang– in this meeting were there any new concessions made - any promises made about what Kim will actually do with his nuclear program?

PENCE: What Kim Jong Un has said publicly and in discussion is that he is prepared – he is prepared to negotiate to achieve complete denuclearization of the Korean peninsula. Those words are important, but we'll see what they mean.

BRENNAN: You spoke with the family of Otto Warmbier - the UVA student who wasn't so fortunate and died shortly after he was released from captivity – what did you say to his parents when you spoke to them yesterday?

PENCE: I simply let them know that while - while we receive this news with joy, that - that Otto was on all of our hearts, and their family was in our prayers. I mean - we - we got Otto home last year, but it wasn't soon enough -

BRENNAN: There are also other families suffering – in Iran, at least 4 American prisoners are still being held there

BRENNAN: One of their family members was at the White House yesterday – is the Trump administration open to a prisoner swap?

PENCE: I believe we are always interested in opportunities to bring Americans home. But -

BRENNAN: And that means talking to Iran right now about doing that?

PENCE: Well I think we sent a pretty strong message to Iran this week when the president made the decision to withdraw from the Iran nuclear deal.

BRENNAN: And that's why the families are worried – that their family members may be held hostage now to the diplomacy that's been torn up?

PENCE: Wwe felt it was important to withdraw from this deeply flawed Iran Nuclear Deal, but now we're engaging on.

BRENNAN: But nothing on the prisoners?

PENCE: The possibility of a new deal which may create opportunities for not only addressing issues of Americans that are detained in Iran, but also checking the extraordinary malign influence and support for terrorism that Iran continues to propagate across the region.

BRENNAN: And you don't think that hurts your diplomacy with North Korea?

PENCE: President Trump believes in peace through strength. And by withdrawing from the Iran Nuclear Deal, he's made it clear to the world stage that we will not enter into a deeply flawed agreement that does not achieve the objectives that we stated. As the North Korean leadership looks at the president's decision, I think the message they'll receive is he is going to hold out for a deal that really achieves the objective that has eluded the world for more than a quarter century – and that is peace on the peninsula, no more nuclear weapons, and no more threatening our allies and neighbors.