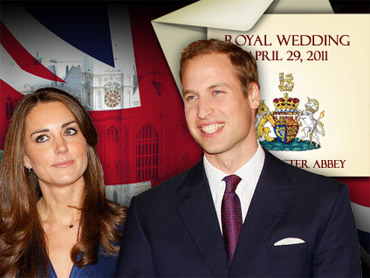 The Queen had lunch Friday at Buckingham Palace. She does that most days - either here or in one of her other palaces. But, as CBS News correspondent Mark Phillips reports, this particular pre-Christmas family gathering included a special guest; the newest future-member of the family firm.

The lunch was a private family affair, but photographers managed to be in the right place at the right to time to snap a couple photos of Kate Middleton and Prince William during their short drive from his place to his mother's, just across the road.

Gatherings of the whole royal family don't happen that often and, when they do, it's usually for some grand occasion like a marriage or major holiday.

For Kate to be invited to this quiet palace event is a further consolidation of her position at the center of the British aristocratic establishment. Accounts of the lunch say she mingled confidently with the 50 or so members of the extended family in attendance.

"Kate Middleton is a confident young woman. I think we saw that on the engagement footage," notes CBS News contributor Neil Sean. "While people might think it is slightly daunting to go in there, for her she has that super support of Prince William."

An Answer From The White House

The primary royal Christmas event is the annual gathering at the Queen's country estate at Sandringham, about three hours north of London. The family's trip to a local church is a Christmas day ritual.

At this stage, however, it seems Kate won't be there. Nor, it seems, will William make it to his grandmother's Christmas gathering this year. He'll be working at his day job; on duty as a search and rescue helicopter pilot.

Kate's expected to spend a final Christmas with her own family - her last "normal" Christmas, perhaps, before she's swept up fully in royal pomp and protocol.