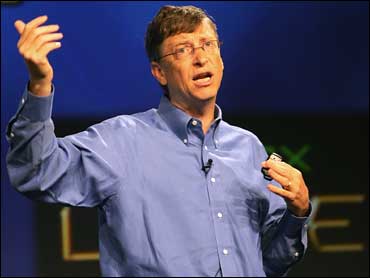 Bill Gates came to San Francisco Tuesday to announce what he called the "live era" of software. Speaking to reporters, Gates and other Microsoft executives announced new products and services as well as a slight change in Microsoft's strategic direction.

While the company has no intentions to abandon its lucrative desktop software franchise, Gates is setting Microsoft on a course to offer more Internet-based services and to more tightly integrate the Internet into existing and future desktop applications including Microsoft Office.

The announcement was really a three-parter, although the first one wasn't an announcement at all. Gates spent a fair amount of time reminding those present that Microsoft has long been committed to use the Internet to keep its software up-to-date. To that end, Microsoft's existing software is already quite "live." Windows, Office and other Microsoft programs have long been able to use the Internet to update themselves with fixes and new features but so have the products from most of Microsoft's competitors. We're past the day when companies have to send out discs to update software.

The next part has to do with Microsoft's new consumer online push which it's calling "Windows Live." Although named for the flagship operating system, Windows Live is really a series of web-based services that don't necessarily even require the user to have Microsoft Windows. Eventually, the idea is to provide information and services to users of any Internet connected device including PCs, personal digital assistants and smart cell phones.

The first (beta) iteration of Windows Live is now available at live.com. The website, which currently works only with Windows Internet Explorer — support for Firefox and other browsers is forthcoming — has a search engine like Google, access to news and information services like Yahoo and MSN but one more thing — a great deal of customization. When you first visit the site you see a sidebar with headings such as "My Web," and "Gadgets" as well as information categories including Business, Entertainment, Health News, Science & Tech and Sports.

Gadgets is a series of mini-applications such as e-mail, customized stock quotes, horoscopes and a ticking clock that all run from within the browser (unlike Apple's Widgets, they do not run from the computer's desktop). You can select a gadget from the list and drag it to any portion of your personal live.com page. For example, incoming mail from my Hotmail e-mail account now appears in the lower right portion of my page. Stock quotes are in the middle and I have technology news near the top. Although Windows live will import a Hotmail account, the service also includes what Microsoft is calling "a new, global Web e-mail service, built from the ground up to be faster, safer and simpler." The company says that "existing MSN Hotmail users will be able to seamlessly upgrade to the new service." You can also use Windows Live to subscribe to syndicated content including blogs and podcasts. You can even listen to the audio of a podcast from within the web page.

Microsoft is also launching "Windows LiveMessenger" which is an enhancement to its existing MSN Messenger instant messaging service. The new Messenger, which will be available later this year, will be tightly integrated into the new mail service.

Another service is "Windows LiveSafety Center" that lets users scan for and remove viruses. Both the mail and safety service are currently available in beta form at http://ideas.live.com.

Windows Live is advertiser supported. Microsoft intends to display ads on the site based, in part, on the way the user has configured the page. To this extent, it is like Google but unlike Google ads, which are only small text links, Microsoft will display large graphical ads.

For small businesses, Microsoft is launching Office Live which will include a free ad supported web presence including a web page, up to five free email accounts and 22 free web-based applications to help run and manage small businesses.

"Office Live" is targeted to the estimated 28 million small businesses worldwide with fewer than 10 employees. The basic free ad supported service will include a domain name, a web site with 30 MB of storage and five Web e-mail accounts — each email account gets up to two gigabytes of storage. For a fee, Office Live will also provide access to 22 business applications to "help automate daily business tasks such as project management, sales and collateral management, customer management, expense reports, time and billing management, and secure internal and external collaboration."

While this initiative marks a step forward for Microsoft, it is hardly a revolutionary concept. Sun and Oracle, for years, have been talking about using the Internet as the nexus for future computer operating systems. Google has been marching steadily forward launching many new services that go way beyond its original search function and Yahoo is continually expanding its offerings. Even AOL, which has traditionally been a dial-up access provider, is repositioning itself as a web services provider with free e-mail and other services. Still, Microsoft has deep pockets, plenty of talented engineers and an almost unlimited marketing budget. That adds up to a pretty powerful force.

A syndicated technology columnist for nearly two decades, Larry Magid serves as on air Technology Analyst for CBS Radio News. His technology reports can be heard several times a week on the CBS Radio Network. Magid is the author of several books including "The Little PC Book."
By Larry Magid
View CBS News In
CBS News App Open
Chrome Safari Continue
Be the first to know
Get browser notifications for breaking news, live events, and exclusive reporting.