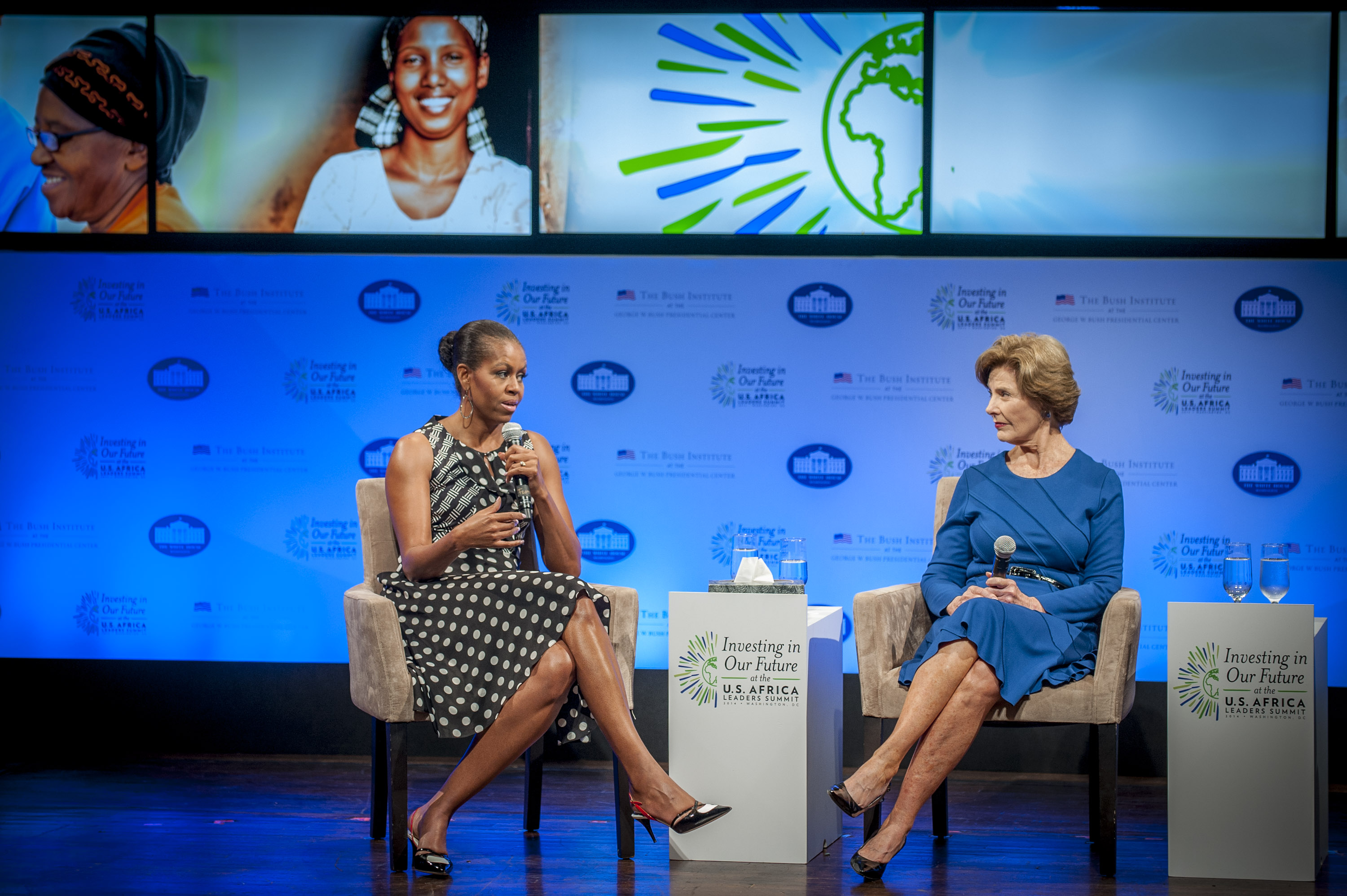 The U.S.-Africa Leaders Summit taking place in Washington, D.C. this week has brought together predominantly male heads of state and government leaders to strengthen ties between the U.S. and various African nations. But Wednesday the stage belonged to two former first ladies who said their role can be just as important in improving the lives of their countries' citizens.

First lady Michelle Obama and former first lady Laura Bush reflected on the platform they have as the wives of world leaders at a day-long symposium focusing ways to boost investments in education, health and economic development through public-private partnerships. It builds on the 2013 African First Ladies Summit held by the Bush Institute in Tanzania last year, which Obama attended.

"We have to fight for our girls," Obama said during a conversation with Bush and journalist Cokie Roberts. "There should never be a girl in this world who has to fear getting educated. That should be something that is intolerable to all of us."

Obama asked men to be "introspective" about the role they can play in doing that. She credited her own success with the men in her life who "valued me and put me first and treated me with respect and didn't abuse me and didn't talk down to me."

Bush similarly told the first ladies in the audience that they will continue to have a platform to speak out after their husbands are no longer in office. She said that has been a focus of the post-presidency work she and her husband, former President George W. Bush, have done.

"We're interested in engaging first ladies from every country to talk about the very unique platform that the spouses of world leaders have to help the women in their countries; to make sure that everyone is paying attention to the education of boys and girls in their country; and that we're making sure that women have the opportunity to be involved in the economic life in their country because only countries where all people are involved can be successful," she said.

"I tease my kids, I tell them i want them to use Instagram to take a picture of something really important rather than their food," she said. "No one really cares what you had for lunch."

They also reflected on how they handle criticism of their families and even their own work.

The two first ladies, who have developed a close relationship since the Bushes left the White House in 2009, share a unique bond as two of only a few women who have been married to a U.S. president and lived in the White House.

At last year's event in Tanzania, the two joked about the limits the role of first lady places on their daily lives with Obama quipping that it was "a really nice prison" and Laura Bush adding, "but with a chef."

During the summit, George W. Bush announced the expansion of Pink Ribbon Red Ribbon, the leading public-private partnership working on the issue of reducing deaths from cervical and breast cancer in sub-Saharan Africa and Latin America. Through the program, 100,000 women have been screened for cervical cancer in Botswana, Tanzania and Zambia in the last three years, and it will now expand to Ethiopia and Namibia.

Mr. Bush said working on cervical cancer was a natural extension of the plan to fight AIDS he launched as president because HIV-positive women are four to five times more likely to contract it.

"This fatal link between HIV and cervical cancer can be broken," he said, "and it's our job to break it."

He also echoed the first ladies' emphasis on improving women's lives, saying that they could help remove the stigma around these diseases that can prevent women from seeking and receiving treatment.

Plus, Mr. Bush told the assembled women, "if you're worried about your husband's political future, taking care of women is good politics."

Vice President Joe Biden's wife, Jill Biden, will also give a presentation focusing on the importance of investing in girls' education. It's been a recurring theme for the administration this year: When President Obama spoke to the Young African Leaders Initiative last month, he urged the assembled audience to "update and create new traditions" when it comes to women's rights in Africa.