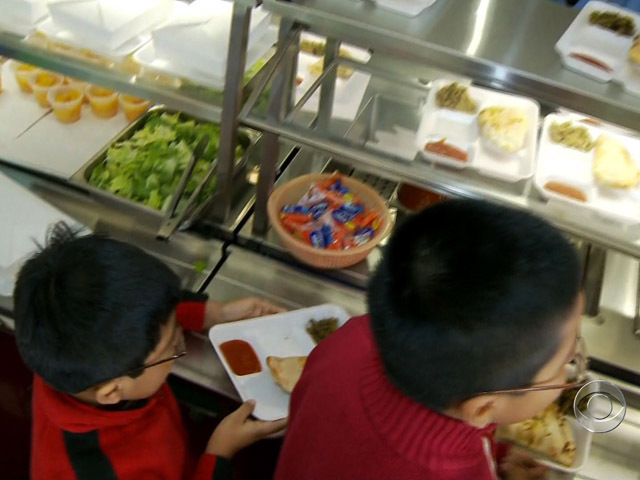 (CBS News) The Laguna Beach Unified School District, in Southern California, is the latest district to rebel against the federal healthy lunch program -- a cornerstone of first lady Michelle Obama's campaign against childhood obesity. The school district announced Tuesday night that it will revise its lunch menus.

The USDA (which administers the program) says growing pains are to be expected, but the complaints from school officials are getting louder; they say kids aren't eating the vegetables and low-fat choices and end up too hungry to learn. And they're saying they're losing money from throwing out all the uneaten food.

The new lunch rules, some districts say, are just unpalatable. Grumblings came from school boards in California to Illinois, Indiana and New York.

In Kentucky, one official said students thought the healthy fare "tastes like vomit."

David H. Freedman writes about the obesity epidemic as contributing editor for The Atlantic. He said, "Any time we try to get people to take a big push or force them into it, we can expect probably the majority of people to not want to make that leap."

Under the program, the federal government dictates portions and menus. Lunches must include fresh fruit, vegetables, and whole grains. And there's a calorie cap: 850 for high school kids, 700 for middle school, and 650 for elementary school.

At California's Laguna Beach Unified School District, healthy lunches went over like a plate of cold leftovers. Debra Appel, food services supervisor at the school, said, "It's not the chicken nuggets, it's not the popcorn chicken. It's not the corn dogs and stuff that the kids really liked."

This year, the district will implement monthly taste tests and sell sandwiches to entice students back to the cafeteria.

About 100,000 schools have signed up for the program -- fewer than expected. But the USDA said there were no widespread problems because most lunches already met the healthy guidelines. Dr. Janey Thornton, deputy under secretary for Food Nutrition and Consumer Services at the USDA, released a statement saying, "USDA continues to provide additional flexibility and technical assistance to schools as they all now work to offer healthier meals."

And Michelle Obama remains a big proponent. She said in May of this year, "Because of this act . . . 32 million children get more of the nutrition they need to learn and grow and be successful and I do hope it's delicious -- we're working on that, yes, indeed."

Despite the opposition, Freedman says the program is a step in the right direction, but one that tried to go too far, too fast.

"We need to be a little smarter about it, and lower the bar," he said, "and offer people more support so they could make smaller, more gradual steps."

The Laguna Beach Unified School District says it hasn't dropped out of the lunch program, something a handful of districts have already done. A survey by the School Nutrition Association found that about four percent of its members will either leave the program this year, or are considering doing so.

George Lucas on his decision to "break up" with "Star Wars"