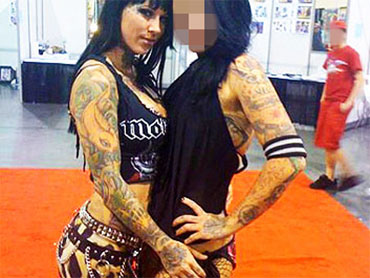 Details are emerging on Michelle "Bombshell" McGee, the busty, tattooed model who claimed to have had an affair with Sandra Bullock's husband, Jesse James - from asserting that she would have never hooked up with James if she knew he was married to claims that she is working on a masters in biochemistry.

McGee told In Touch magazine that she had an affair with James while Bullock was filming "The Blind Side." The relationship, she claims, went on for 11 months.

The tattoo model and mother of two told the magazine, "I would never have hooked up with him if I thought he was a married man. He gave me the impression they were separated."

Bullock reportedly moved out of the home she shared with James just days before the reports of infidelity surfaced, according to People magazine. The report comes less than two weeks after James accompanied her to the Academy Awards on March 7, when she won the best actress Oscar for her work in "The Blind Side."

McGee also advertised herself on an adult Web site, SoCalGlamourGirls.com, on which viewers could pay to chat with her or see her on a Web cam, according to Fox News.

"I am the hottest busty tattoo and fetish model you will ever meet on a webcam," her profile says. "Come have a hot and steamy affair with inked girls like me on live video."

McGee, who listed her age as 24 on the site, also claimed in her profile that she has a bachelor's degree in biology, completed two years of medical school and was working on a master's degree in biochemistry.

Danielle Dee Madrano, the owner of SoCalGlamourGirls.com, told RadarOnline that McGee told her about the relationship with James around May 2009.

"She told me that Jesse's marriage to Sandra Bullock was for publicity, and that's why he did Donald Trump's show, "Celebrity Apprentice," she told the Web site. "He never called on Sandra for money or influence because their marriage was a sham," she said.

RadarOnline also reports that McGee was raised Amish and worked as a stripper at several nightclubs. She was fired from Larry Flynt's Hustler Club about two years ago, and now strips under the name Avery at a Pure Platinum Club in San Diego

A source at the Platinum club told the Web site that he or she was "not surprised," when he or she learned the news about her affair with James because "she seemed like a person who liked the attention."