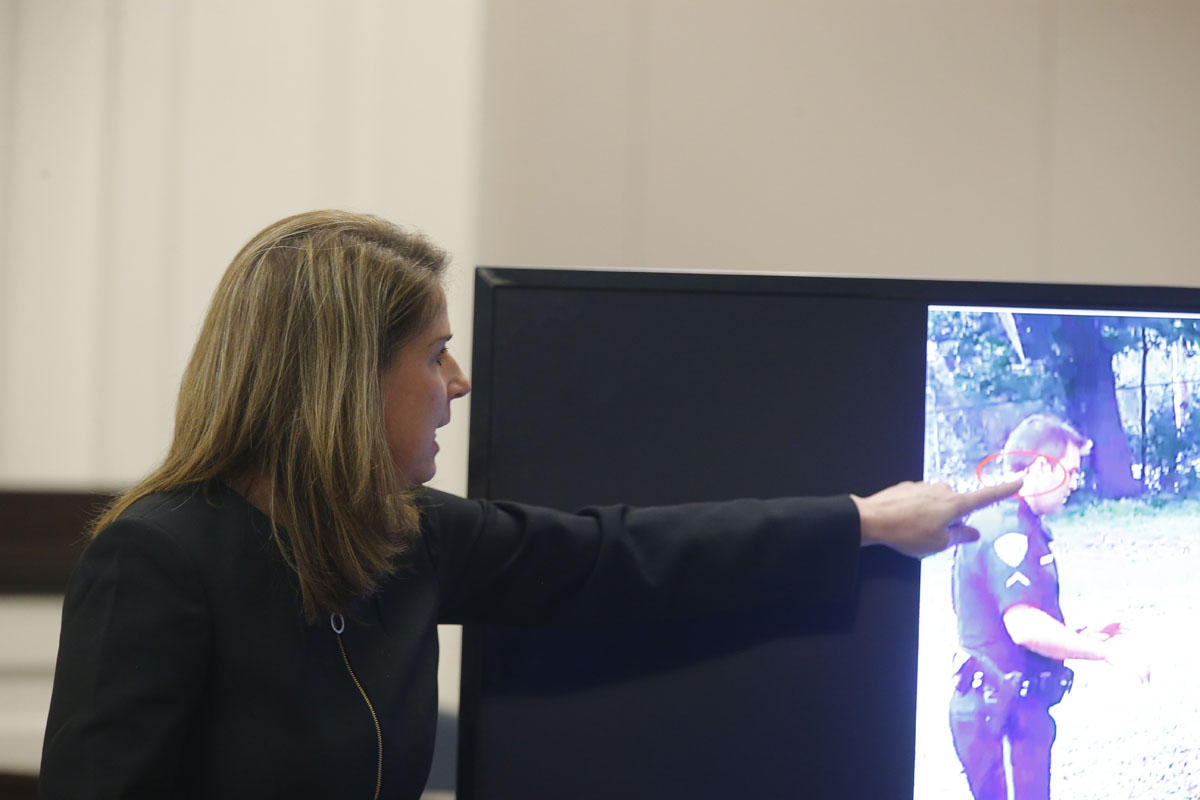 CHARLESTON, S.C. — A white police officer who fired eight shots at the back of an unarmed black motorist during a foot chase should be convicted of murder or manslaughter, a prosecutor argued Wednesday after a monthlong trial.

Malice, the evidence required for a murder conviction, had to be in officer Michael Slager’s mind the instant he fired at the back of Walter Scott, who at that point was running away, Solicitor Scarlett Wilson argued. Five bullets struck Scott’s body, felling him at a distance of dozens of feet.

Manslaughter, a lesser charge the judge added Wednesday at the prosecution’s request, requires proof the killing was done in the heat of passion, after being provoked. But even if Slager felt provoked because Scott resisted being repeatedly stunned by a Taser, she said that doesn’t justify killing him.

“Just because someone is provoked, it does not give someone the right to do whatever they want when they want,” Wilson said.

The jury of 11 white people and one black man was handed the case Wednesday evening after a judge instructed them on the law.  Speaking to the media, Walter Scott’s brother said his family is confident the panel would convict Slager and praised the solicitor’s work. He said no human being deserves to be “gunned down in the back.”

“It’s up to the jury and God,” said Chris Stewart, a family lawyer.

Scott ran from his car into a vacant lot after Slager pulled him over for a broken taillight in April 2015. Slager chased him down, but Scott refused to be subdued and tried to run away again. A bystander recorded the final moments of their encounter, in a video that shocked the nation.

Slager was fired from the North Charleston police force as the video began to spread on social media. But it doesn’t show the whole story, defense attorney Andy Savage said in his closings.

It doesn’t show Slager ordering Scott to stop before shooting him with his Taser. It shows only the very end of their struggle over the stun gun. And Slager had no way to know Scott wasn’t armed, Savage said.

“This is about the felonious conduct Mr. Scott engaged in,” Savage argued. “Who attacks a policeman for a brake light? Who does that?”

The 55 witnesses included a toxicologist who said cocaine was found in Scott’s body.

“Whether he was on cocaine, alcohol or whatever it was, he chose to attack a police officer,” Savage told the jurors. Slager, he said, didn’t shoot Scott “because of a brake light. He shot him in fear for his life.”

Wilson urged jurors to ignore defense attempts to distract them from what the cellphone video shows, and she pulled up evidence photos showing Slager with his radio and earpiece still in place after the shooting.

“That is not the sign of a violent, throw-down, life-threatening fight,” she said.

She accused Slager of inventing a story about fighting for his life, and said his fellow officers at the scene “bought everything he said that day hook, line and sinker.”

“Our whole criminal justice system rides on the back of law enforcement. Because of that they have to be held responsible when they mess up,” she concluded.

The jury watched the cellphone video repeatedly during the trial. Earlier Wednesday, they were able to see the crime scene directly. Court officials and one representative each from the defense and prosecution went along; the media was kept out.

Meanwhile, Judge Clifton Newman granted the prosecution’s request to consider manslaughter as well as murder, and Savage did not object.

Since prosecutors are not alleging aggravating circumstances that could bring a death sentence, Slager could face 30 years to life if convicted of murder. Manslaughter is punishable by two to 30 years in prison.

After assuring the judge that he understood the risk of testifying in his own defense, Slager, 36, took the stand Tuesday. He said he was in “total fear” as Scott resisted arrest and grabbed his Taser.

The bystander began recording about then. The video shows Scott breaking away from Slager and trying to run.

“At that point, I pulled my firearm and pulled the trigger,” Slager testified. “I fired until the threat was stopped, as I was trained to do.”